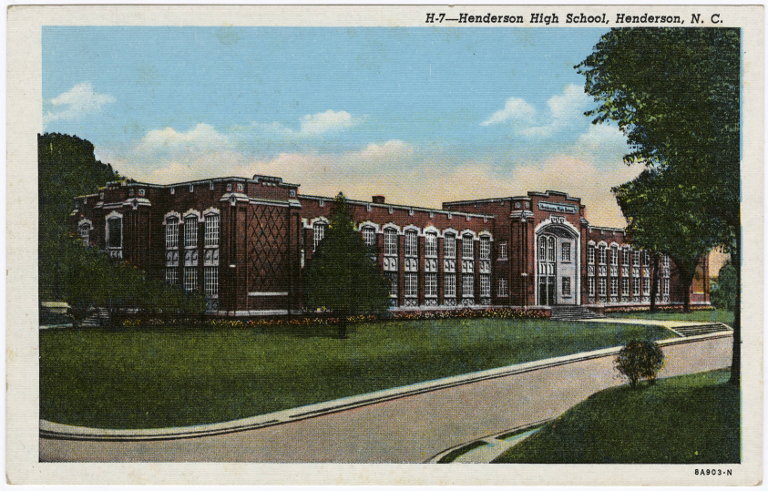 Eric Goodyear Flannagan Sr. (1892-1970) was an architect and engineer whose firm in Henderson, North Carolina planned buildings throughout central and eastern North Carolina. He specialized in educational and health related facilities but also designed churches, civic buildings, residences, and other structures, with Henderson’s First United Methodist Church, located just a few steps from his office, one of his best-known landmarks. His sons Eric Jr. and Stephen continued in the business he founded.

Eric G. Flannagan Sr. was born in Albemarle County, Virginia, to Broadus and Lottie Goodyear Flannagan. He married Beryl Morris on June 26, 1915, and they had three children: Eric, Jr., Stephen, and Effie Louise. After his first wife’s death in 1968, Eric G. Flannagan Sr. married Clara Hamlett Robertson, who survived him.

Like many of his generation, Flannagan worked his way up as an architect. He graduated from the Miller Manual Training School of Albemarle, Virginia, where he studied and later taught mechanical drawing and served as head of the Mechanical Drawing Department (1912-1914). He worked as a draftsman (1913) for patent attorney Victor J. Evans in Washington, D.C., and received his certification from the International Correspondence Schools in Scranton, Pennsylvania, in 1914. From 1914 to 1922 he worked with the West Virginia Pulp and Paper Company of Covington, Virginia, where he became superintendent of construction and head of the engineering department.

Flannagan was encouraged by family members to move to North Carolina. He became a registered engineer in the state in 1921, and in 1922, he moved to the flourishing tobacco town of Henderson where he had relatives and opened an engineering firm. He advertised his services as a construction engineer in the autumn and winter of 1922 in the Oxford Public Ledger, and that newspaper carried a story on October 27, 1922, headlined “New Construction Engineer at Henderson, N. C.,” reporting that Flannagan had been practicing in Henderson for about five months. His specialty was “that of furnishing Plans, Specifications, & Supervision, for all kinds of buildings and in case of a factory building he can take charge of the entire installation of machinery, etc.&” Flannagan became a registered architect in 1926, and thereafter practiced both architecture and engineering. In time he took his sons into the firm, which from 1954 onward operated as Eric G. Flannagan and Sons, Architects and Engineers. Active in professional and community organizations, Flannagan was a member of the North Carolina Chapter of the American Institute of Architects, the Henderson Rotary Club, Masonic Lodge No. 229, and the North Carolina Architectural Board of Registration (1951-1956), for which he served as vice-president in 1955-1956.

In a career that spanned over forty-five years in North Carolina, Flannagan planned a wide range of facilities including numerous institutional buildings such as county homes, schools, churches, hospitals, and nursing homes, chiefly in eastern and piedmont North Carolina. The Temple Theatre (1924-1925) in Sanford, one of his first major buildings, represents his characteristic mix of Colonial Revival and Art Deco styles. In his adopted hometown of Henderson, he built apartments, stores, warehouses, and commercial buildings including those in the building list plus the Henderson Daily Dispatch Building, the Southern National Bank Chestnut Street Branch, and the Dr. A.P. Newcomb Office. He also planned Camp Graham, a Girl Scout Camp at nearby Kerr Lake.

Like many architects of his day, Flannagan planned numerous educational facilities. At East Carolina State Teachers College, now East Carolina University (ECU) in Greenville, he designed nine structures including five student dormitories, one teacher’s dormitory, the Flanagan Building (1939), J.Y. Joyner Library (1954), and Christenbury Memorial Gymnasium (1952). Working in the era of racial segregation, he designed public schools both for white students and for black students, with some of the latter including schools assisted by the Rosenwald Fund. His designs and his practice suited his clients so well that several of them, such as ECU, continued to call on him year after year (see Dictionary of North Carolina Biography). Eric G. Flannagan Sr. retired from fulltime practice in 1965 but continued to consult with his sons in the family architectural practice until his death in 1970.