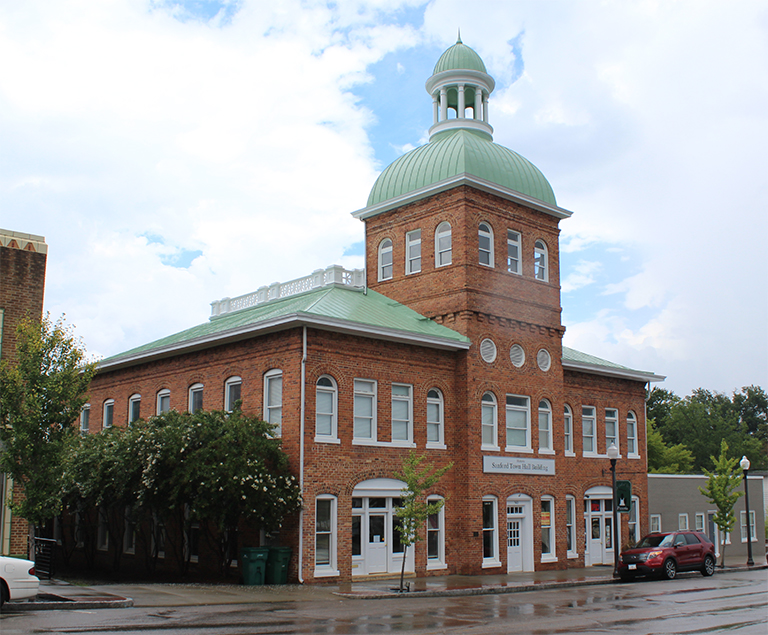 Joe W. Stout (April 7, 1883-August 22, 1933), a brickmason and contractor headquartered in Sanford, located in an area known for its clay deposits and brick making, developed an extensive construction practice in eastern and central North Carolina. He took an important role in building downtown Sanford during the early 20th century, including the Sanford Town Hall, the Wilrik Hotel and the Temple Theatre. Beyond Sanford, Joe W. Stout and Company began with public schools and moved to more ambitious projects. Most of his projects were in the small railroad towns of eastern and central North Carolina that blossomed in this era. As these communities employed members of the growing regional architectural profession to design substantial and “modern” hotels, schools, and civic buildings to assert their rising stature, Joe W. Stout and Company was often the company chosen to build them.

A native of Randolph County, Joe W. Stout married Maggie Allred in Randolph County in 1903, and by 1920 he was listed as a contractor and head of household in Jonesboro, Lee County, with Maggie and their five children aged fifteen down to a baby. In 1930 the family, which included six children, was listed in “West Sanford.”

As related by J. Daniel Pezzoni in The History and Architecture of Lee County, Stout came to Sanford in the first decade of the 20th century and in 1906 was working with other brickmasons on the West Sanford School. Apparently his first major project was the Sanford Town Hall of 1909-1910, which became an instant landmark in the community. In 1919 he was among several investors who developed the Cumnock Brick Company, which supplied material for his and other projects. He soon incorporated a contracting firm known as Joe W. (or J. W.) Stout and Company. In the same period, Stout was elected vice president and then president of the North Carolina chapter of Associated General Contractors.

Stout’s firm appeared regularly in newspaper notices. The Raleigh Times reported on February 24, 1912, the issuance of a charter to “Joe W. Stout & Co.” of Sanford to do general contracting construction work, with an authorized capital of $10,000 and $2,000 subscribed for by Joe W. Stout, O. W. Stout, and V. C. Brown. The firm capitalized on the state’s early 20th-century push for modern public schools, which provided “bread and butter” projects for many architects and builders. In 1913 the company won the contract to enlarge the Apex Graded and High School, which the Raleigh News and Observer of July 9, 1913, asserted would be one of the “handsomest school buildings outside a city or large town in North Carolina.” Other contracts for brick schools included those in Beaufort (Farmer and Mechanic, December 1, 1914); Norlina (Norlina Headlight, August 6, 1915—the Norlina School designed by architect Christopher Gadsden Sayre) and East Sanford (Charlotte Observer, May 19, 1916). In Greensboro, which undertook a major local school building campaign in the 1920s, Stout’s company built a number of schools, including the West Lee Street School (Charles D. McIver School), designed by Starrett and Van Vleck of New York as consulting architects and Albert Carl Wirth of Greensboro as local architect (Greensboro Patriot, October 24, 26, 1922). The firm continued to bid on and execute school projects for years.

The company expanded its scope during the 1920s. Winston-Salem Journal of September 13, 1920 that Stout’s firm had built or was building a large number of buildings in the town of Farmville, including “about fifty cottages, two large residences, several big stores, a big garage building, a splendid up-to-date bank building [the Bank of Farmville], and a graded school which will have no superior in the State, it is said.” The total cost was expected to be almost a million dollars. An especially significant commission was the contract for the $400,000 granite Johnston County Courthouse in Smithfield, designed in imposing classical fashion by architect Harry Barton of Greensboro (News and Observer, May 11, 1921). The Stout company’s advertisements in the News and Observer (April 27, 1922 and other issues)—”For Stout Construction See Stout”—featured illustrations of the Bank of Farmville and the Farmers Commercial Bank, exemplary of the neoclassical banks that had begun to define key corners of many towns. In that same year, Stout’s firm took the contract for building the large, neoclassical Moore County Courthouse in Carthage, designed by architect Christopher Gadsden Sayre (Moore County News, December 14, 1922).

Success seems to have bred success. At Elon College (see Elon College Buildings) in Alamance County, the building committee to rebuild the administration building after a fire selected as architect Herbert B. Hunter of High Point. The committee was initially inclined to have a local contractor, but after “careful consideration,” unanimously decided to award the contract for the brick and steel structure to Joe W. Stout and Company. Before long, the firm had contracts for seven buildings at the college (Alamance Gleaner, March 15, 1923; Asheboro Courier, July 26, 1923). The new buildings were executed in the red brick Georgian Revival style popular at the time, which set the tone for subsequent campus architecture.

At his death in 1933, Stout was lauded in the Sanford Herald of August 24 as “one of the most successful and skillful contractors in the state.”