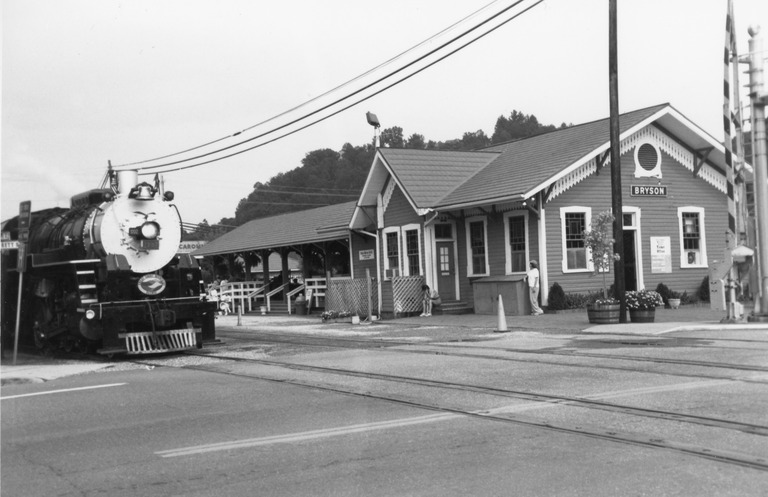 Joseph D. Elliott (December 17, 1854 [or 1855]-May 4, 1930), a native of South Carolina, established a major regional construction firm in Hickory, N. C., which built scores of buildings in North Carolina and other southern states. He was a leading entrepreneur and public figure in his adopted community and took a major role in its transformation from a village on Western North Carolina Railroad (est. 1860) into a regional railroad and manufacturing city. Beginning as a carpenter and soon becoming a contractor, Elliott is best known for building railroad depots for the Southern Railway Company, which took over the WNCRR. He partnered with his cousin J. Worth Elliott as Elliott and Elliott and in 1908 established the Elliott Building Company.

In 1875 Joseph began to learn the carpenter’s trade with the Knoxville, Tennessee, firm of McLeemore, Kelly, and Company, and served for two years before becoming a superintendent for Knoxville contractor William Fulcher. In 1879, he started in business for himself and then went to Atlanta, where he remained for two years (Prominent People of North Carolina, 1906). In 1883 he married Mary Elliott of Charlotte, a daughter of H. Frank Elliott, a Charlotte builder; they had three daughters. (A family tree website indicates that Joseph had previously married Annie Hood, who died in 1881 and with whom he had a daughter.)

According to Acme Preservation Services’ “Survey Update of Hickory,” Joseph D. Elliott and his wife “passed through Hickory in the late 1880s on the way to a building site, but soon returned” to the town because of its promising opportunities. Elliott may have been residing in Salisbury at that time; Hickory would have been on the way to Asheville.

In 1890, a local publication touting the grand new Elliott Opera House in Hickory, reported that the partnership of Elliott and Elliott consisted of J. D. Elliott, then of Burke County, and J. W. Elliott, then of Mecklenburg County, who had been associated together as contractors for five years and had executed contracts in North Carolina, South Carolina, Virginia, Alabama, and Arkansas. Among their projects by that time were the Asheville passenger depot, “all the depots on the H. P. B. and I. Southern railroad,” the Jackson County Courthouse, and an addition to Claremont College in Hickory.

As Hickory newspaper reports indicate, J. D. and J. W. Elliott and their family members and employees created an effective regional business by gaining numerous far-flung contracts and assembling work forces to accomplish them, with supervision by selected members of the firm. The first years of the 20th century exemplified their lively operation. In 1900, the Hickory Times-Mercury of April 4 reported that H. F. Elliott (relationship unknown) “in the employ of J. D. Elliott,” had left on a “locating tour” to locate thirteen depots for the Southern Railway Company in South Carolina. Later that year, the Asheville Citizen-Times of June 8 noted that J. D. Elliott of Hickory had the contract to build 300 “section houses” for the Southern in South Carolina and Georgia, and the Charlotte News of August 18 reported that Elliott, identified as “contractor of depots for the Southern,” was to build 188 section houses for the company plus several large coal hoists. The Hickory Times-Mercury noted on September 19 that Elliott was contractor for a Baptist Chapel in West Hickory. On December 21, the Newton Enterprise noted that J. S. Deal and his son Ed had gone south to “work for Mr. J. D. Elliott on one of his railroad contacts.” On January 11, 1901, the Newton Enterprise noted that R. P. Dakin had gone to Virginia to build depots under a sub-contract from J. D. Elliott. The Hickory Times-Mercury reported on February 6, 1901 that J. D. Elliott had the contract for building three depots on a railroad which the Southern had purchased in Ohio the week before. On May 18, 1901 the Asheville Citizen-Times reported work begun on a large brick freight warehouse in that mountain city, with J. D. Elliott of Hickory as the contractor. In a review of Hickory’s businesses, the Times-Mercury reported on January 1, 1902, that J. D. Elliott’s firm contracted and built “depots, car sheds, hotels, State houses, etc.” As a Southern Railroad contractor, he had done work in many states, which “last year amounted to $100,000. At times he works several hundred hands. The average number from this city is sixty and his pay roll is immense.”

The firm’s activities continued far and near. The Newton Enterprise noted on June 13, 1902, that J. S. Allen had left for Georgia to “work with one of J. D. Elliott’s force of carpenters.” The Hickory Times-Mercury of August 20 reported, “Contractor J. D. Elliott and a crew of hands left Monday for Washington, D. C. where he has a large contract right in the heart of the city. ‘Keep off the grass,’ Joe.” Local projects also multiplied. The Newton Enterprise of January 30, 1903 noted that Elliott had a force of about 20 hands building a “nice depot” in Newton. In 1905, Elliott and others were building brick stores near the square in Hickory (Charlotte Observer, July 20, 1905). When J. D. Elliott supervised construction of a new Baptist church in Hickory at the corner of Watauga St. and Champion Ave., he was identified as “one of the largest contractors in this section of the state.”

In 1906 Elliott captured the contract for an especially prominent building, the “North Carolina Building” at the Jamestown Exposition of 1907 in Virginia. The Raleigh Times of December 19, 1906, reported that J. D. Elliott had been the successful bidder to construct the building, designed by Zimmerman and Leister (Lester) of Winston-Salem in “old colonial design.” The Exposition featured buildings representing various states, many of which were “colonial” in styling. The Salisbury Carolina Watchman of August 14, 1907 and other newspapers gave further details on North Carolina’s grand, columned “Southern Colonial” structure, built at a cost of $23,000. It had fourteen “commodious apartments” plus hallways, closets, and bathrooms. The prominence of the North Carolina Building and its coverage in many newspapers broadened Elliott’s reputation and helped popularize the style.

In 1908, J. D. and J. W. Elliott formed the Elliott Building Company with J. D. the president of the company and J.W. the vice president. Thereafter, notices of the firm’s construction projects typically cited the Elliott Building Company rather than J. D. Elliott. The company advertised regularly in local newspapers, and newspapers carried numerous references to the company’s projects including bridges, mills, and dams as it became one of the largest construction firms in the region. One of the new firm’s first buildings was a new dormitory at Winthrop College in South Carolina. The firm also undertook such substantial projects as the remodeling of the Seaboard Air Line’s union station in Raleigh (Wilmington Morning Star, April 16, 1910); construction of depots for the Winston-Southbound railroad between Winston-Salem and Wadesboro, including those in Winston-Salem, Eller, Lexington, Fairmont, Tuckertown, Whitney, Albemarle, Norwood, and Ansonville (Winston-Salem Journal, September 9, 1910), of which the Albemarle Depot is the only one known to survive; a passenger station in Statesville (Charlotte Evening Chronicle, March 29, 1911); and two warehouses in Wilmington (Charlotte Evening Chronicle, July 20, 1911). Many more projects followed over the ensuing decades for the Seaboard as well as the Southern railroad company. It is not certain how active J. D. was in the day-to-day operation of the company, but he did continue to pursue contracts for the firm, as for example when “Mayor J. D. Elliott returned from a trip to Baltimore, where he was awarded the contract for a “handsome passenger station” at Chester for the Seaboard Air Line” (Hickory Daily Record, July 21, 1921).

Along with his construction business, the “energetic and progressive” J. D. Elliott played a major role in the development of other businesses that shaped Hickory’s economy and presaged its importance as a furniture manufacturing center. In 1911 Hickory investors including Elliott persuaded the Surry Chair Company of Elkin, N. C., to move its factory to Hickory; it later merged with other firms to become the Hickory Chair Manufacturing Company. In the same year, Elliot was one of three men who began the Piedmont Wagon and Manufacturing Company in Hickory (Raleigh Times, July 29, 1911). He was president of First National Bank in Hickory and an officer, founder, or director of other local businesses.

Elliott also entered into public life, serving as mayor of Hickory for several terms and in the state legislature. He was an active member of the Baptist church, an advocate for good roads in North Carolina, and a leader in the Shriners.

The Hickory Daily Record of June 12, 1920, described the Elliott Building Company’s importance to the town’s growth. The article cited the firm’s construction of industrial and railroad buildings, including fertilizer plants in Tarboro, Edenton, Wilmington, and Laurinburg, N. C. and railroad shops and depots for the Southern and Seaboard lines as well as cotton mills throughout the South. Local projects included a “Chero Cola” bottling plant, a newspaper office, a harness factory, the Hickory Spinning Company plant, the Hickory Overall Company plant, and others. The article also noted the death of vice president J. W. Elliott, who was replaced by J. M. Setzer.

The 1920 article lauded J. D.’s public service. “If you were to ask Mr. Elliott about his activities, he would tell you that he is prouder of doing something for Hickory than anything else.” His goal in 1920 was “to see a municipal building and auditorium in Hickory.” This was soon accomplished in the construction of the Hickory Municipal Building (1921), designed by architect Charles Christian Hook of Charlotte and built under the supervision of the city manager with advice from Mayor Elliott. (The Elliott Building Company had submitted the low bid to build it, but that was rejected because of the conflict of interests.)

Among Elliott’s projects of the 1920s, the Salisbury Evening Post of January 17, 1923, carried a story from Hickory that “local capitalist” Joseph D. Elliott had announced acquisition to waterpower rights to a 2-mile stretch of the Catawba River, where a “huge” hydroelectric plant would be built to serve Hickory. In 1924 the Elliott Building Company contracted to build a union passenger station at Newton, successor to two earlier stations built there by Elliott. (Lincoln County News, January 17, 1924).

Joseph D. Elliott died at his home in Hickory on May 5, 1930 at age 75. As the 1920 article in the Hickory Daily Record summed up his contribution, “It is a recognized fact that J. D. Elliott, president and organizer of the company, has made his money in other places and used it to make Hickory.”