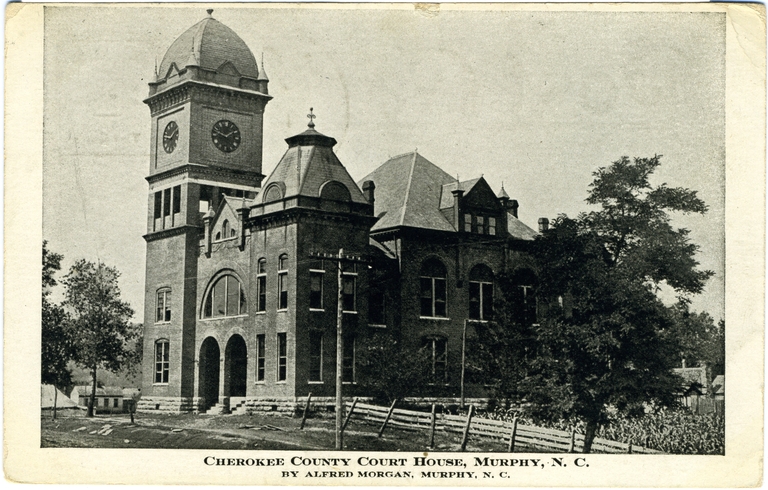 Bruce and Morgan, architects, of Atlanta (1882-1904), Georgia’s leading architectural firm of the late 19th century, designed at least two courthouses in North Carolina, both of them large and elaborate brick edifices: the Cherokee County Courthouse in Murphy and the Cumberland County Courthouse in Fayetteville. Like most of the imposing late 19th century courthouses in the state, they stood for only a few decades before being destroyed in the 20th century.

According to Georgia architectural historian Richard Funderburke, the firm of Bruce and Morgan was “the most successful architectural business in Georgia” in its day. Established by Alexander Bruce (1835-1927) and Thomas Henry Morgan (1857-1940), it was the successor firm to the firm of Parkins and Bruce in Atlanta. Bruce and Morgan advertised that they specialized in planning courthouses, colleges, churches, libraries, and other public buildings. Their courthouse designs were typically eclectic in style and dramatic in form, featuring large towers and irregular rooflines, and combining styles including the Second Empire, Italianate, Romanesque Revival, and Eastlake modes in a single building. They also built many public schools and after 1895 Morgan designed some of Atlanta’s first tall buildings.

Bruce and Morgan’s Cherokee County Courthouse of 1891 was the first of their known buildings in North Carolina. When that building burned in 1895, the firm planned its replacement, evidently quite similar (see below). Meanwhile, in Fayetteville, in 1893, the county building committee considered plans by various architects for a new Cumberland County Courthouse, and the committee selected the plan of Bruce and Morgan of Atlanta.

The Fayetteville Weekly Observer of April 20, 1893, noted, “This firm are noted for their court house work throughout the state and have two of their buildings in North Carolina—the one at Monroe and the elegant house at Murphy.” The Monroe building has not been identified (the 1887-1889 Union County Courthouse is credited to architect Thomas J. Holt), but the “elegant house at Murphy” was certainly the courthouse of 1891-1892. The Cumberland County Courthouse, constructed by Hickory contractor J. D. Elliott, was a towered, brick edifice, with equally strong facades facing the two streets that framed its corner location.

In North Carolina, the Fayetteville Weekly Observer of April 20, 1893, reported under the headline “The New Court House” that the local building committee for the new Cumberland County Courthouse had considered plans for “a number of architects” and had adopted the plan of Messrs. Bruce & Morgan of Atlanta, Ga.” Their drawings could be seen at a local office. The article continued, “This firm are noted for their court house work throughout the South and have two of their buildings in North Carolina—the one at Monroe and the elegant house at Murphy.” The Monroe building is evidently the 1887-1889 Union County Courthouse for which Thomas J. Holt was documented in county records as the superintending architect in 1887-1888, likely working from designs provided by Bruce and Morgan. Notably, the Union County Courthouse strongly resembles a courthouse by the same architects in Walton County, Georgia. The “elegant house at Murphy” was the Cherokee County Courthouse of 1891-1892. The Cumberland County Courthouse, constructed by Hickory contractor J. D. Elliott, was a towered, brick edifice somewhat akin to the courthouse in Murphy, with equally strong facades facing the two streets that framed its corner location.

Bruce and Morgan advertised their services in North Carolina newspapers, such as the Charlotte Observer of December 7, 1883, promising to furnish designs for public and private buildings “in any part of the country—Southern Work a Specialty”—and a similar ad appeared in the Asheville Citizen-Times of September 23, 1886.

Bruce and Morgan were among the architects who submitted proposed designs for the New Hanover County Courthouse in Wilmington in 1891; the winning candidate was Alfred S. Eichberg of Savannah (Wilmington Morning Star, June 11, 1891). In addition, the Raleigh News and Observer of June 14, 1892, carried an invitation for bids for the erection of a brick church building in Oxford, N. C., with plans and specifications to be seen at the office of S. H. Smith in Oxford, and also at the office of Bruce and Morgan, architects, in Atlanta. It is not clear what church this may have been. At this time, some Oxford congregations were considering building new churches, but it was a few years before they did so. A few years later, Oxford residents built a brick Methodist church inspired by Charles E. Hartge’s Methodist church in Washington, N. C., and St. Stephen’s Episcopal Church was built in stone from designs by Silas McBee. Bruce and Morgan’s Cherokee County Courthouse burned a few years after its construction and was replaced in 1895, with the same firm commissioned to provide plans and specifications for “putting the structure as it was before the fire. It was reported that the exterior walls and two fireproof vaults are as good as when put up” (Asheville Citizen-Times, January 7, 1896). The courthouse as rebuilt was a magnificent landmark of the small mountain community of Murphy, well representing its rail connections to the larger world, including Atlanta. That courthouse likewise burned and was replaced in 1925-1926 by another imposing courthouse on the same corner site, in local blue marble in a classical design by architect James J. Baldwin.

For the citizens of Murphy, the choice of an Atlanta architectural firm made eminent sense. After the completion of the Marietta and North Georgia Railroad (1888; later the Louisville and Nashville or L&N) from Atlanta and the Western North Carolina Railroad (1891) from Asheville, the long-remote mountain county seat was tied by rail to the larger world, with Atlanta (less than 120 miles away) by far the largest city within easy reach by rail. The large brick courthouse of 1891-1892 and 1895 offered a bold statement of the newly arrived railroad era.