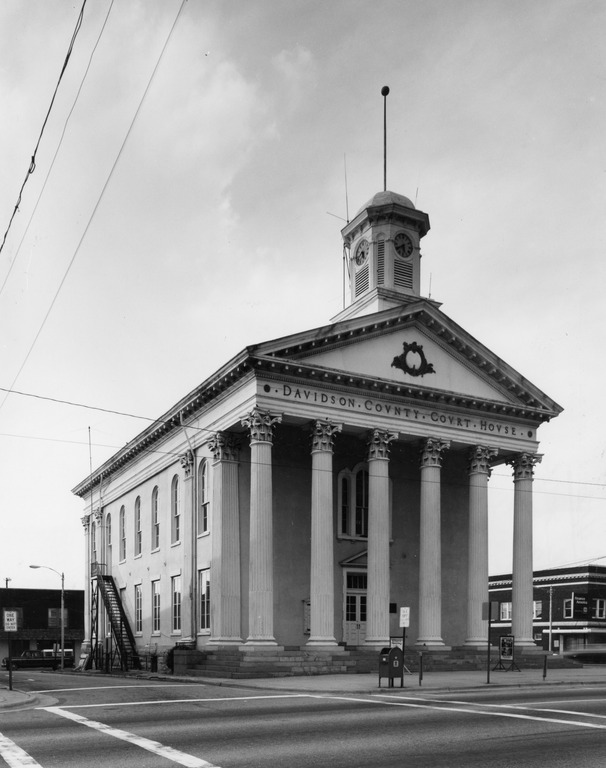 Ashley and Dudley, a partnership formed by carpenters William D. Ashley (1827-1860) and George A. Dudley, was a prominent if short-lived building firm in the North Carolina Piedmont. They were among the artisans who capitalized on the flurry of substantial and stylish building projects that embodied the state’s “Spirit of Improvement” of the 1850s. Their known works are two large projects, the North Carolina Rail Road Company Shops in present Burlington and the Davidson County Courthouse in Lexington. They likely had other projects to their credit that qualified them for work of such scale and complexity.

In 1856, Ashley and Dudley obtained the carpentry contract for the North Carolina Rail Road Company Shops, a large facility that was the raison d’être of the town that became Company Shops and later Burlington. Brickmason David McKnight of Greensboro and his associate Joseph Houston, operating as Houston and McKnight, contracted for the masonry work. Other builders involved in the project were one S. Dixon and a Mr. Cooper. A complaint from a writer signing as “Alamance” objected to the high costs of the project and noted the large number of workmen employed by Ashley and Dudley. He also commented that Ashley and Dudley had been the only bidders on construction of some houses near the shops (Lexington and Yadkin Flag, June 20, 1856).

During the same decade, there was a spirit of competition in courthouse building among a few Piedmont counties. In 1854 Rowan County began the contest by displaying plans for an imposing Greek Revival courthouse in the Doric order, which was soon erected in Salisbury. The Salisbury Carolina Watchman newspaper reported, “No sooner had Rowan proceeded to build a new Court House than her daughter Davidson began to talk of the same thing.” The Davidson County Courthouse in Lexington, begun in 1856 and completed in 1858, was a tall and ornate edifice with a Corinthian order portico. In 1858 a Greensboro newspaperman visited Lexington and commented that the new “temple of justice” was so imposing that visitors stopped to gaze on its “beautiful proportions” and “majestic columns.” Another classical courthouse was underway in Greensboro, and it was reported that other counties had been inspired to “enter the lists” in competing to have the finest and most magnificent Court House in the State” (Carolina Watchman, August 4, 1857; Greensboro Patriot, October 15, 1858).

Little is known of the early lives of either Ashley or Dudley, except that William D. Ashley was a son of Raleigh house carpenter and prominent citizen William Ashley (1793-1853) and doubtless gained his training from his father as well as working with him for a time. In 1850 the United States census listed William D. Ashley, a carpenter aged 23, living in Raleigh in the household of his father, William Ashley (1793-1853), also a carpenter and the owner of $1,200 in real estate, and wife Nancy. The younger Ashley owned $300 in real estate. They lived just two doors from Silas Burns, the leading citizen and blacksmith who had worked on the State Capitol in the 1830s. William D. Ashley became the administrator of his father’s estate in 1852 (Raleigh Register, December 22, 1852). Within a few years, the younger Ashley entered into a partnership with Dudley that enabled the two men, operating as Ashley and Dudley, to take on at least two large contracts and possible others. (There was also a William P. Ashley, probably a different man, who advertised his services as a carpenter in Eastern North Carolina newspapers in the 1850s.) William D. Ashley died of consumption in the prime of life on February 27, 1860, and was interred, like his father, in Raleigh’s City Cemetery. Further research is needed on George A. Dudley’s career.