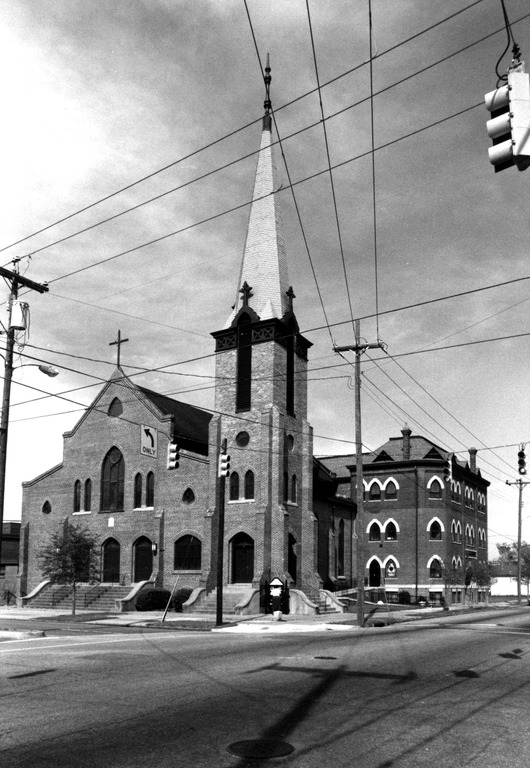 Lewis Hollingsworth (1834-1899) was an African American carpenter and builder in 19th century Wilmington, N. C. He is best known for his work as contractor on St. Stephen’s A. M. E. Church, which is among the state’s most outstanding churches of its denomination from late 19th century.

When the congregation of St. Stephen’s (now St. Stephen) A. M. E. Church embarked on construction of their large brick church in 1880, architect J. K. Vaughan, Jr. was paid $30.00 to draw the plans. Construction took several years. In 1881, Daniel A. Sadgwar was identified as “architect” who managed construction. The brick walls were completed and the roof put into place before a hiatus occurred; the congregation met for a time in the basement.

In 1884 the building committee sought proposals for completing the interior of the sanctuary (Wilmington Morning Star, June 18, 1884), which Hollingsworth undertook. Church records contain contracts for the work. The same newspaper reported on January 7, 1885, that workmen were completing the “very handsome” interior work including the galleries, “beautiful scrollwork,” and “handsome pews of modern style.” The newspaper identified “Lewis Hollingsworth, colored,” as the contractor.

Some years later, the congregation pursued completion of the tall spire. In 1893, when the steeple of St. Stephen’s was nearing completion, the Wilmington Messenger of October 8 reported that J. K. Vaughan was “the architect who drew the plans and the contractor for the work was Louis Hollinsworth (sic), the well known colored builder and contractor who retired from business a few years ago and is now residing in the country on his farm.” Work on the steeple had begun three weeks earlier, and the contract was given to Hollingsworth, “because he had built the church a number of years ago.” Hollingsworth lived only several more years after the steeple was completed.

Hollingsworth has been described as a freedman, but little has been found concerning his early life. Research by Cynthia Brown shows that a marriage bond records him as a son of Richard and Easter Hollingsworth and that he married Betsey Slade on February 6, 1868 at the A. M. E. church in Wilmington; his gravestone gives a birth date of April 16, 1834. The United States Census of 1880 listed him in Wilmington as mulatto carpenter, aged 40, widowed or divorced for two years, and living alone. He may have been the Lewis Hollingsworth, aged 55, who married Sarah L. Murphy, 27, in Duplin County, N. C., in 1891.

Hollingsworth took a role in civic affairs and was a member and an officer of Wilmington’s Giblem Masonic Lodge. He became a member of St. Stephen’s congregation and served as its treasurer. As notices in the local newspapers indicate, he was active in Republican political life for many years. During a period of unrest after the passage of the Civil Rights Bill of 1875, he was one of several leading black citizens who signed a “card” counseling moderation, published in the Wilmington Morning Star of March 6, 1875. In 1876, he won a prize at the Black Industrial Fair for a winding staircase.

During the Fusionist period of the 1890s, when Republicans including some black men held a variety of elected and appointed offices in Wilmington and elsewhere, Hollingsworth was one of several men of color who served as local magistrates in the mid to late 1890s (Wilmington Morning Star, March 14, 1895; Wilmington Semi-Weekly Messenger, October 14, 1898). How the violent Democratic coup of November 10, 1898, affected Hollingsworth is not yet known, though it was surely traumatic. He died a few months later. In a notice in the Wilmington Messenger of February 26, 1899, the master of Giblem Lodge summoned his brethren to meet at their lodge room on that day to attend Hollingsworth’s funeral, which was to take place at his former residence on Campbell Street. He was buried in a small graveyard in the Rock Hill community, where his grave marker was discovered by librarian Beverly Tetterton of Wilmington (see Brown, Strength from our Past, 44).