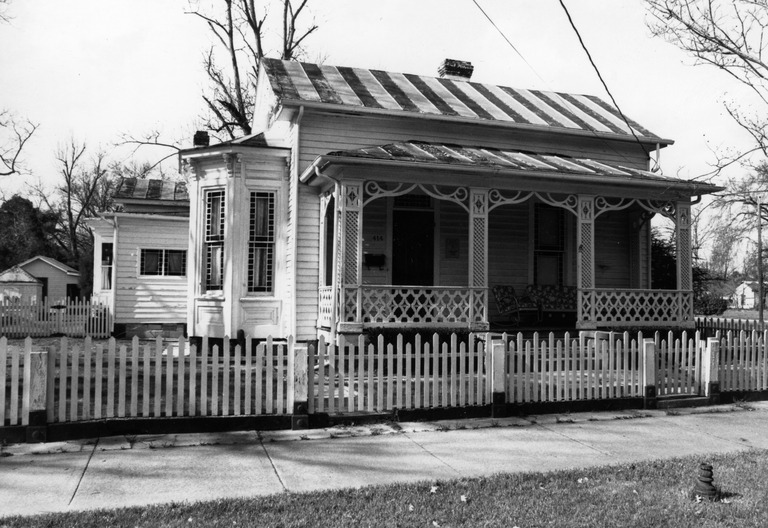 George Mathewson (ca. 1837-1923) was an African American brickmason active in Tarboro in the late 19th century. No known surviving buildings have been documented as his work, although he was involved in building some brick stores for Tarboro’s John Shackleford and he is noted as having helped erect the Tarboro City Hall along with African American carpenter Henry C. Cherry. He likely worked on some of the other brick buildings in town before freedom came. He is credited with building the Masonic Lodge for black masons, and he doubtless built foundations and chimneys for many frame buildings. Newspapers note civic payments to him for building bridges and drains. Mathewson’s own residence is a small, richly ornamented frame dwelling that displays the picturesque sawn and lattice work popular in Tarboro and vicinity in the mid to late 19th century. Because of the similarities with other local buildings, an unanswered question is his relationship with other builders active in the area who are credited with such work, including George B. Lipscomb and Oswald Lipscomb.

According to family tradition, George Mathewson was born into slavery, one of several children of a white slaveholder named John Mathewson and his enslaved woman, Rachel Pender. (See Note below.) The United States Census of 1860 shows that slaveholder John Mathewson of Edgecombe County owned two male slaves, both “mulatto,” one aged 14 and one aged 20, the latter of whom might well have been George.

Public records contain information about Mathewson and his family in freedom. The United States Census of 1870 listed George Mathewson as a 30-year-old brickmason in Tarboro and owner of real estate valued at $2,000. He headed a household that included his wife, Catherine, 32, son Stanly, 16, and daughter Georgiana, 5, plus Francis Mathewson, 16, a carpenter’s apprentice. In 1880 the census again recorded George Mathewson as a brickmason, with his household including Catherine, a seamstress, and daughter Georgianna. In 1900 the census showed the family still in Tarboro; George was noted as a brickmaker born in September 1837, and he and his wife had been married for 35 years. Still with them was their daughter Gina, now a schoolteacher.

Few buildings have been documented to Mathewson. An exception appears in a letter published in the Tarboro Southerner of June 18, 1885, in which one L. M. McCullen wrote that another newspaper, the Sentinel, had reported that “Mr. George Mathewson has contracted to erect some brick stores, on the Redmond lots.” McCullen stated that he himself was employed on “the said building by Mr. John F. Shackleford,” and insisted that Mathewson was “employed by the day and did not contract for the work.” The letter appears to refer to the Shackleford Shops of ca. 1884-1890 at 310-314 Main Street; they stood near the ornate Redmond-Shackleford House on Main Street, built in 1885 for the Redmond family not long before Kate Redford married businessman John Shackleford in that year.

During Reconstruction and for a few years afterward, Mathewson was active in political affairs; he like most black citizens and some whites affiliated with the Republican Party, while most of the white planter-merchant class were Democrats. The town and county had a majority black population, and a few black citizens held local offices as well as serving in the state legislature. In 1875, the Tarboro Southerner of May 7 listed local officials in Tarboro, including town commissioners George Mathewson, Benjamin Norfleet, Joseph Cobb, and Henry C. Cherry (a black citizen who served in the state legislature and other positions). In 1877 Mathewson was included in a list of magistrates for Township No. 1 in Edgecombe County; the Southerner commented that the list “as a whole, will compare favorably with the good old ante-bellum days.” This list did not indicate the race of the persons named (Tarboro Southerner, August 2, 1877.) In 1878, Mathewson was appointed as a “poll holder” in Tarboro’s Third Ward (Tarboro Southerner, April 18, 1878). (For a history of the political events of this era from the perspective of white conservatives, see Turner and Bridgers, History of Edgecombe County, North Carolina, 1920.)

Several years later, the Raleigh Gazette, a black-owned newspaper, occasionally referred to Mathewson and his family. The Gazette of October 31, 1896 mentioned George Mathewson briefly under news from Tarboro and reported that Miss Georgia A. Mathewson (George’s daughter) had left for Durham to visit her cousin, “Mrs. Dr. A. M. Moore.” (Dr. Moore was Durham leader Aaron Moore, who in in 1889 had married Cottie S. Dancy, a niece of Tarboro Republican political figure John C. Dancy, who was related by marriage to Catherine Mathewson.) In 1898, the Raleigh Gazette of February 5 reported that “Mr. George Mathewson, one of Tarboro’s distinguished citizens, has been spending several days in our town doing some Masonry work. His many friends were truly glad to welcome him in their midst.” The Gazette did not specify Mathewson’s projects in Raleigh.

George Mathewson was widowed by 1917, when his daughter Georgia Mathewson married one Nathan Williams. George remarried, and in his will of 1921 left property in Tarboro to his wife, Kinsey, and after her death his house and lot to his daughter Georgia. He signed with his mark, X. At George Mathewson’s death on October 30, 1923, his death certificate recorded that he was a brickmason who resided at 414 East Church Street and identified his mother as Rachel Pender of Edgecombe County; his father was not identified. His daughter, Georgianna Williams, provided the information for the death certificate. It stated that he was to be buried at St. Paul’s Baptist cemetery.

Note: A student research paper by Rodney Debrew, completed in 1995 and based on upon local and family accounts, including interviews with Gladys Matthewson in 1995, stated that George Matthewson (sic) was one of six children of John H. Mathewson, a white man, and Rachel Pender, an enslaved woman. Several other family members are mentioned in the report as building artisans. George is credited with building the frame Masonic Lodge at 415 Panola Street in Tarboro and with working on construction of the City Hall of 1888-1890.