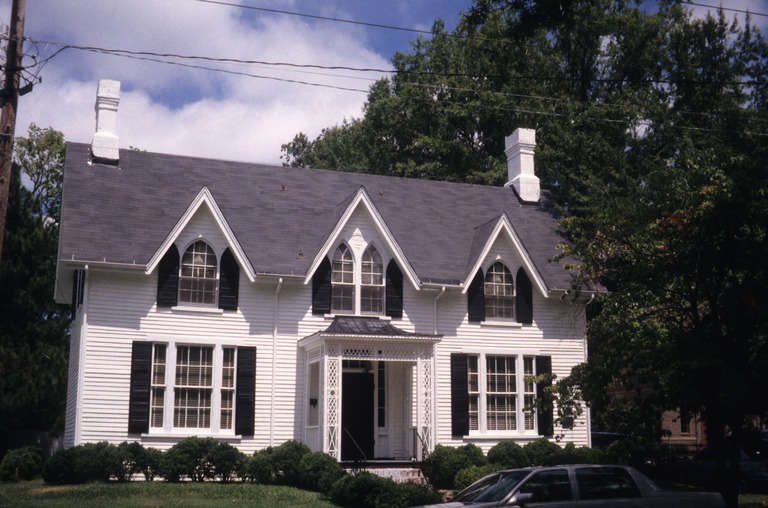 Oswald Lipscomb (July 26, 1826-Feb. 3, 1891) was a carpenter from Virginia who came to North Carolina as a young man and became a leading builder in the newly chartered railroad town of Wilson, specializing in the picturesque residential styles popular in the mid-19th century.

Oswald Lipscomb is described as a son of Reuben and Elizabeth Lipscomb (possibly the Reuben Lipscomb listed in the United States Census of 1830 as head a large household in Prince William County, Virginia). His early training and life are not known. He may have been related to George B. Lipscomb and Oscar Lipscomb, both carpenters from Virginia, who came to North Carolina and practiced their trades in Tarboro and Raleigh, respectively. Although some sources cite Oswald as an “architect,” he was like many of his contemporaries (see Jacob W. Holt, for example), a practical builder who designed as well as built houses, using current architectural books for inspiration for stylish motifs.

Lipscomb is believed to have arrived in Wilson in 1849, the year when the railroad and market town was chartered. Formerly known as Toisnot, a stop in Edgecombe County on the Wilmington and Weldon Railroad, the newly incorporated railroad and market town offered many opportunities for builders. In 1850 the United States census listed Lipscomb, an unmarried carpenter aged 25, living in the Edgecombe County household of merchant W. S. Thorn, along with another carpenter from Virginia, T. W. Ellis, aged 30. Five years later, Wilson became the county seat of Wilson County, which was formed in 1855 from portions of Edgecombe, Johnston, Nash, and Wayne counties.

Lipscomb soon established himself as a successful citizen. He married well, wedding in 1855 Penelope Rountree, daughter of a prominent and wealthy merchant, and they had two children, James and Penelope, before the mother died. Their son James went to live for a time with his uncle, James Rountree, and like his uncle became involved in the local textile industry. In 1860 Oswald Lipscomb, aged 34, headed a household that included only himself and 8-year-old Penelope. Though a carpenter by trade, he had moved into the land and slaveholding class and identified himself as a farmer, with his real estate valued at $5,000: between 1855 and 1858 Lipscomb had bought several town lots and a 345-acre farm. His personal property was valued at $17,960, much of which represented his ownership of 9 slaves, including 5 men ranging from 20 to 71 years of age, a woman of 17, and three children. By 1861, he sold his real estate including the farm for over $10,000; he may have sold his slaves as well.

After the Civil War, Oswald Lipscomb remarried on March 11, 1869, taking as his wife Sarah (Sallie) A. Barnes of another prosperous Wilson family. The 1870 census showed Oswald, 44, and Sarah, 28, residing in Wilson in a boarding house along with a physician and a minister. Having adapted like several other builders to the postwar economy (see Wilson and Waddell for example), the entrepreneurial Lipscomb now owned a steam-powered sash and blind factory which in 1870 employed 8 hands and produced planed lumber, doors, blinds, and other items worth $4,000 per year. In 1872 Branson’s North Carolina Business Directory listed Lipscomb as a “House Builder” and in 1877-1878 noted him under manufacturers as O. Lipscomb and Company, Contracting and Building. In 1874 he had gone into business with his brother-in-law J. T. Barnes, and the directory of 1884 listed “Barnes and Lipscomb, Building and Contracting” and “Barnes and Lipscomb, Planing Mill.” The census of 1880 showed Oswald and Sallie Lipscomb with a household that included her mother, Theresa Barnes; a niece, Blanch Barnes, aged 9; and Oswald’s son James, aged 19 and a clerk in a store. Oswald was listed as a farmer and a mechanic (“mechanic” meaning a skilled craftsman in a variety of trades, especially building). In the 1880s Lipscomb sold his interest in the firm to Barnes because of his failing health, and he died in 1891.

During his career that began in Wilson’s infancy, Lipscomb did much to define the 19th century architectural character of his adopted home. Establishing a locally recognized signature style, he favored the picturesque modes that were popular from the 1850s into the 1870s, especially the Gothic Revival cottage style. An early history of the town, Daisy Gold’s A Town Named Wilson (1925) noted that Lipscomb “left his individual type of architecture in his limited territory as completely as did more famous architects in a wider field.” Gold listed six houses in Wilson as his work based on information from local informants: the Billy Winstead House, Albert Farmer House, Davis-Whitehead House, George Blount House, and the Moses Rountree House, plus the Ruffin-Farmer-Dawson House in nearby Greene County. All were built in the 1850s except the Rountree House of ca. 1870. (These houses and a few others with family connections are identified in the building list as his work, while for others linked by stylistic traits he is noted as “attributed” builder. Further documentation may substantiate these and other projects.)

These houses displayed the picturesque or Gothic cottage style popularized by A. J. Downing, Calvert Vaux, and other publishers of architectural books. In contrast to the asymmetrical massing of some such cottages, Lipscomb’s houses in the style typically took a symmetrical form and featured a trio of steeply pointed gables across the front façade, pointed or triangular-headed windows, and in some cases, board and batten covered walls. He frequently employed sawnwork lattice porch treatments that carried out the picturesque effect. Besides his examples in Wilson, he built at least two such houses in the countryside, the Jesse Norris Housein Wilson County and the Ruffin-Farmer-Dawson House in Greene. Notably, his contemporary (and probable kinsman) George B. Lipscomb and other carpenters built in similar fashion in nearby Tarboro during the same period.

After the war, as Wilson’s economy and merchants recovered and prospered, Lipscomb continued to build picturesque residences, often featuring the popular bracketed Italianate style. These ranged from his own modest Oswald Lipscomb House to the imposing Barnes-Bruton House in Italianate villa style, built for Lipscomb’s brother-in-law. Other houses in the decorative modes of the era have been attributed to his shop, such as the Alpheus Branch House II and the Frank W. Barnes House.

For several decades, Lipscomb’s stylish and well-built residences gave Wilson’s West Nash Street between Pine Street and Raleigh Road much of its architectural distinction as one of the state’s prime 19th century residential avenues. Beginning about 1950 and continuing into the 1970s, however, changes in taste and, especially, rezoning and expansion of non-residential uses westward from downtown resulted in the demolition of most of the town’s notable Victorian architecture. Today the few surviving examples are treasured as landmarks of the community’s 19th-century heritage.