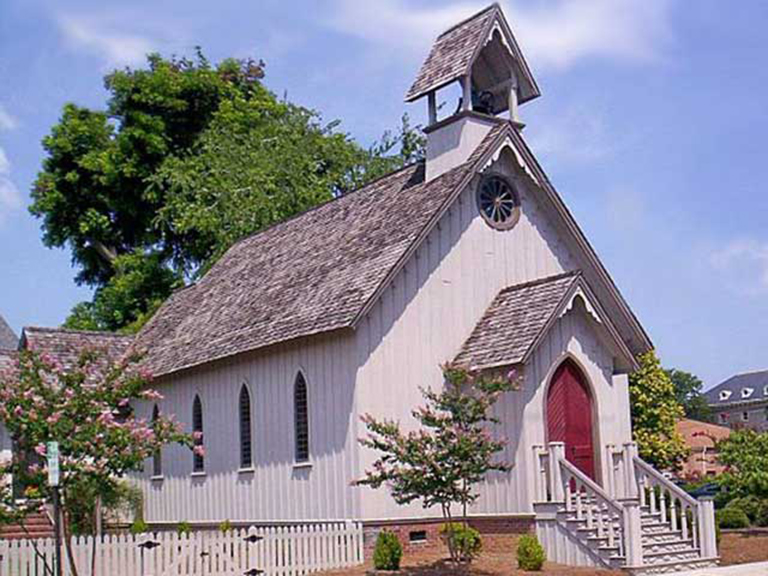 John James (ca. 1842-after 1900) was an African-American builder active in Elizabeth City, N. C. in the late 19th century. His best-known surviving work is the Carpenter Gothic style St. Philip’s Episcopal Chapel in that city.

Although he was a free house carpenter in Elizabeth City before the Civil War, John James’s early life and training have not been established. By the 1870s he was a man of stature in the community: the Elizabeth City North Carolinian of June 8, 1871 referred to him as a “respectable and leading colored man here.” He is probably the John James who ran on the Republican ticket for a town commissioner of Elizabeth City in 1872, at a time when Republicans including black men had a strong political presence in eastern North Carolina (North Carolinian, May 2, 1872).

In 1860, the United States Census listed John James, aged 19, a free black house carpenter, living in the home of free black washerwoman Amanda Sawyer, aged 40. The household also included Sarah James, 16, Charles Sawyer, 18 and a mariner, and Margaret Sawyer, 10. Their family relationships were not noted in that census. James is apparently missing from the 1870 census. The 1880 United States Census recorded John James as a black carpenter aged 38 in Elizabeth City; his household included his wife Amanda, 34, and their baby son “Benny F.” along with John’s mother Elizabeth James, aged 69. All were natives of North Carolina. The 1900 census recorded John James and his wife Amanda, living with two sons, Benjamin, aged 21, and George, aged 18, both carpenters. Amanda had had thirteen children, according to the census, of whom only these two were living in 1900. John James was identified as an “undertaker,” which could refer to a funereal occupation—some carpenters regularly made coffins and added funeral services to their offerings—or to the old term “undertaker” meaning a contractor. The family lived on Lane Street.

Although James probably constructed or remodeled numerous buildings, only a few are known. He was sufficiently prominent to gain mention in the local newspapers during the late 19th century. The Elizabeth City North Carolinian of May 24, 1893, noted that “John James, Carpenter and Builder, has ‘two irons in the fire’—the Corner Stone Baptist Church and the new Episcopal Chapel. He is as ‘busy as a bee.’” It is not clear whether James’s work on Corner Stone Baptist Church (believed to have been built in 1889) was new construction or an expansion or renovation. The new “Episcopal Chapel” was St. Philip’s, a prime example of the picturesque “Carpenter Gothic” mode influenced by architect Richard Upjohn and widely popular with small Episcopal congregations. Here the characteristic vertical battens are detailed at the cornice level to resemble an arcade. The congregation was begun as a mission from the local Christ Episcopal Church to serve African American worshippers. The history of St. Philip’s identifies the builder as black contractor John James, who later joined the church. The first service was held in the nearly finished church on August 1, 1893, and it was consecrated on April 24, 1898, by Alfred Watson, bishop of Eastern North Carolina. (Unlike many denominations, the Episcopal church in the state and nation did not divide along racial lines after the Civil War but continued in biracial dioceses, though typical in racially segregated congregations.)

Other projects by James were also cited in the Elizabeth City North Carolinian. In 1889, that newspaper reported that John James was superintending the “enlargement and improvement of the colored Methodist church” in a project then nearing completion in Elizabeth City. This may have been Mount Lebanon A. E. Zion Church: the black congregation was organized in 1850 by the Elizabeth City Methodist Church and within the decade had a frame church with spire. The newspaper writer stated that it would have a “really handsome appearance” inside and “externally it will also look much better than before.” (The church was replaced by the present brick edifice in 1905.) The same newspaper reported on June 18, 1890, that the “Misses Creecy” had built a new residence on their lot to be occupied by a Mr. Old, and “John James was the architect and builder.” The North Carolinian of April 29, 1891 noted that Mr. H. T. Greenleaf was having his residence on Main Street “remodeled and much improved, John James is doing the work.” (Neither house has been identified.)

A few years later, the Elizabeth City Weekly Economist of January 24, 1896, reported on the establishment of a new school at “Park View” intended to “give the colored people an opportunity of acquiring a practical and industrial education.” John James and one Emanuel Davis were to be in charge of the carpentry and brickmason’s department. Several buildings had been erected already. The continued activities of this school are not entirely clear. Located on a farm, where students could “work out their board on the farm,” it served a different mission than present Elizabeth City State University, which was founded in 1891 in town as a state normal school for black teachers.

The last news of John James as a builder in the North Carolinian appeared on September 22, 1897, in a report that “while at work on the scaffolding of a building Mr. John James accidentally fell to the ground and received a painful, though not serious injury.” As noted earlier, in 1900 James was identifying himself as an “undertaker,” and his two sons were working as carpenters, perhaps a shift in activities spurred by his fall.

The date of John James’s death and his activities after 1900 have not been identified. No evidence of his or Amanda’s burial place has been located.