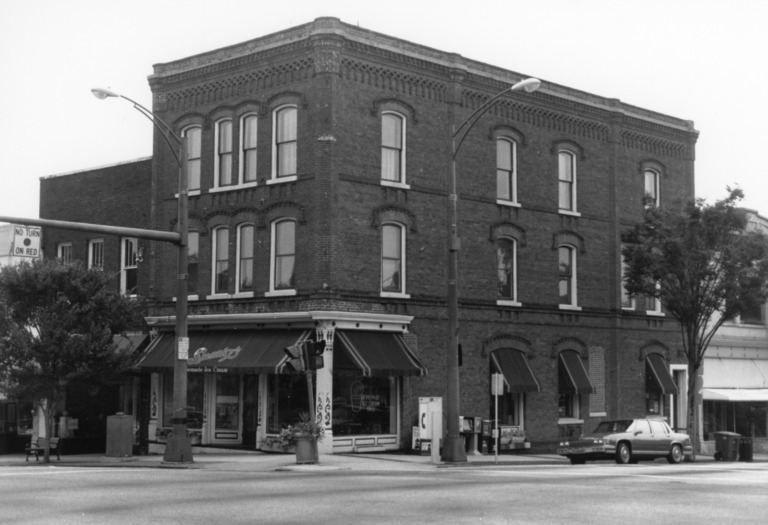 A. B. Hendren (ca. 1820-1865?), who identified himself as an architect as well as a builder, was active in piedmont North Carolina during the late 1850s. His best known surviving work in North Carolina is the imposing brick store in Salisbury now known as the Kluttz Drugstore. Like many in the building trades, he led a mobile life: a native of Virginia, he moved from Salisbury to Tennessee, and thence to Alabama. Little is known of his life and work before or after his tenure in Salisbury.

In the January 13, 1857 issue of the Salisbury Carolina Watchman and in subsequent issues, A. B. Hendren advertised that “having located in Salisbury,” he offered his services as an architect to the people of western North Carolina, ready to furnish plans in “Oriental, European or American Designs.” He would also provide “original drawings for Frontals, Porticos, Verandas, Conservatories, or for the remodeling of Residences, fitting up stores, and any kind of Ornamental or Fancy Work.” His charges, including personal supervision, were from 3 to 6 percent on the cost of the building—in keeping with emerging standards of professional practice. He gave as references Judge Ellis and John Shaver of Salisbury, C. P. Mendenhall of Greensboro, J. W. Thomas of Thomasville, and R. C. Pearson of Morganton—an impressive roster that may indicate that Hendren had been associated with railroad projects.

Hendren apparently found a good reception in Salisbury. The Watchman of January 27, 1857, reported that he was receiving inquiries from local citizens and some from a distance, and he was preparing plans and specifications for a store and office building. That was probably the project the Salisbury Herald cited on March 11, 1857: “We have just examined the plan of a beautiful brick building, drawn by Mr. A. B. Hendren, which Mr. Joseph F. chambers contemplates erecting on the corner of the public square,” which had been made vacant by a fire in 1855. It was to contain four “apartments for stores, besides rooms for various purposes in the second and third stories.” When completed, the 3-story brick building was reportedly “more noticed and talked of than any put up in this place for some time,” especially because of the “extraordinary beauty of the brick work,” which had elaborate corbeling that contrasted with the town’s more usual “outside plastering” (Carolina Watchman, November 2, 1858). The 3-story commercial and office building later became the Kluttz Drugstore.

The Carolina Watchman of August 4, 1857 reported that Hendren had additional commissions, including the design and supervision for a new courthouse for Guilford County. He had also contracted to build a Methodist church in Salisbury (completed in 1858) and had “other contracts in hand.” On October 27 the same newspaper informed the public that Hendren had won a prize at the North Carolina State Fair for a “specimen of architectural drawing.”

Despite these successes, Hendren’s stay in the area was brief, and he left Salisbury before completion of these commissions. Possibly his departure was hastened by the national financial crisis of 1857, which stopped or delayed many projects. Like many others in seaboard states, he headed west. He advertised in the Nashville Tennessean of May 6, 1858, “A. B. Hendren of Va Architect. Corner of Summer and Union Sts, Nashville.” He evidently does not appear in North Carolina or Tennessee in the United States Census of 1860, and he is likely the Andrew B. Hendren listed in that census as an architect aged 40 in Huntsville, Alabama. Andrew was identified as a native of Virginia, as were his wife, Mary D., aged 35, and three of their children aged 10 to 4. Daughter Mary, aged one, was born in Tennessee. In addition, he may be the A. B. Hendren who served as a newspaper editor and mayor of Athens, Alabama, in the early 1860s, and possibly the A. B. Hendren who died in Norfolk, Virginia, on July 29, 1865.

Note: The courthouse erected in Guilford County in 1858 may or may not have been A. B. Hendren’s design, but according to the Greensboro Patriot of October 15, 1858 it was built by McKnight and Collier—probably David McKnight, who also built the Caswell County Courthouse in Yanceyville. The Guilford County edifice burned and was replaced in 1872 by a similar building designed by Lyndon Swaim.

Note: The Carolina Watchman of August 23, 1877, reported on a remodeling of the Methodist Church in Salisbury: “The removal of the old roof of this building brought more plainly to light the startling defects in Mr. A. B. Hendren’s construction work. His ‘self-supporting roof’ was little better than a huge man trap. Some of the timbers of the joice [sic] and roof were founding hanging by from 1/8 to 1/4 of an inch on the walls! This was known years ago, and stays were introduced to prevent an accident, otherwise the whole building must have fallen some time ago. The new work now going up is of a different order, and is designed to make security doubly sure.” Whether this problem had any connection with Hendren’s departure from Salisbury is not known.