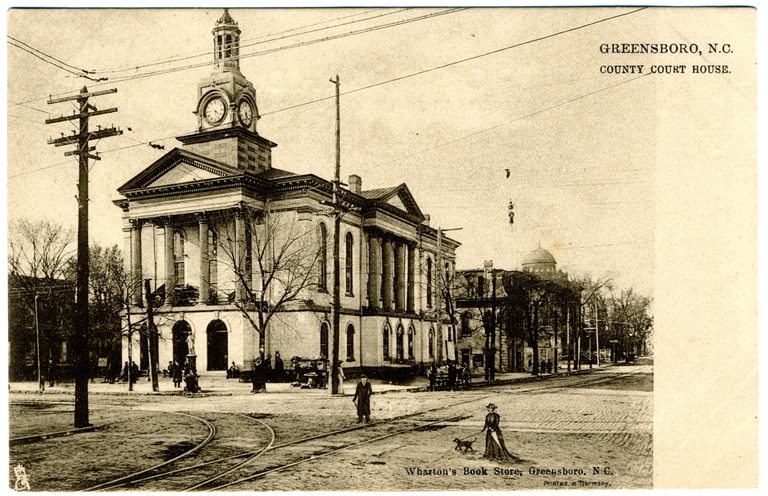 Lyndon Swaim (December 15, 1812-March 26, 1893) was a prominent newspaper editor and public official in Greensboro who late in life turned to architecture and styled himself as “architect.” Taking advantage of the fluidity of professional identities and the demand for construction in the late 19th century, he planned public and private buildings in Greensboro and elsewhere.

Swaim was the oldest of eleven children of Moses and Adah Swindell Swaim. Moses Swaim, a Randolph County farmer who served as county commissioner, attorney and clerk of superior court, was the first president of the North Carolina Manumission Society. Like many Quakers who favored manumission, Moses Swaim eventually moved to Indiana. In the meantime, in 1834 his son Lyndon Swaim left home at age 22 and entered the printing and newspaper trade in Greensboro, working with his cousin William Swaim of the Greensboro Patriot and later Benjamin Swaim of the Southern Citizen. After William Swaim’s death in 1835, Lyndon married William’s widow, Abiah Shirley Swaim, in 1842. (Her daughter and his stepdaughter Mary Jane Virginia became the mother of the nationally renowned author William Sydney Porter—best known as O. Henry.) After his wife Abiah died in 1858, Lyndon married Isabella Logan of Greensboro, and they had four children.

In 1839 at the urging of Greensboro citizens, Swaim embarked on a fifteen-year career as editor of the Greensboro Patriot, making the newspaper a successful and influential publication and a strong Whig voice for education and internal improvements. In the mid-1850s, Swaim shifted his focus to public service in Greensboro and Guilford County governments. After a brief return as editor of the Greensboro Patriot, he changed direction again. Around 1869, as postwar construction picked up, he made a serious study of architecture, and became Greensboro’s leading architect during the 1870s and 1880s. Although many men in this period moved from being artisans or contractors to taking on the title of architect, Swaim was unusual in entering the field from a background of journalism. In 1880, the 67-year-old Swaim identified his occupation to the census taker as “Architect.” William T. Comstock’s Architects’ Dictionary (an erratically updated publication) listed “L. Swain” (who died in 1893) along with Epps and Hackett (see Orlo Epps) as Greensboro’s only architects in 1894 and 1896.

Details of Swaim’s architectural work are few, and none of the buildings documented or attributed to him still stands. He is said to have planned residences as well as public buildings. In Greensboro, his principal projects were designs for two civic edifices at the center of town: the Guilford County Courthouse (1872), an Italianate style building that copied much of the form of its 1858 antebellum predecessor, which had burned; and the United States Post Office (1883-1885), considered “a very fine and expensive building in its day.” Swaim also gained commissions for public buildings in nearby counties, including the eclectic Person County Courthouse (1883) in Roxboro and remodeling of the Rockingham County Courthouse in Wentworth. Farther afield, he provided drawings and specifications for the Pender County Courthouse and Jail (1882-1883) in Burgaw, an Italianate building with tower, similar to that in Greensboro.