The Fayetteville Observer of March 27, 1897, announced the next day’s dedication of the Episcopal church, which was described as gift to the Diocese of East Carolina in trust for the use of St. Joseph’s colored congregation of this city, pf Mrs. W. F. Cochran and Fayetteville. The writer noted, “it is probable that with the exception of Mr. Vanderbilt’s church at Biltmore [All Souls Episcopal Church by architect Richard Morris Hunt], there is no church interior in the State so beautiful as that of St. Joseph’s.” While there were costlier churches in the state, “none can exceed the tastefulness and appropriateness of every detail of the finish and fittings of this one” with its polished wood fittings and furnishings and fine stained glass. The shingled walls of the frame church enhance the picturesque character of the asymmetrical structure with its bell tower and arched openings. It is unknown whether the design came from an as yet unnamed architect or was developed by the builders. The newspaper reported, “The whole work has been under the supervision of Mr. Robert Strange, C. E., the contractor and builder being Mr. W. C. Bain, who is gaining quite a reputation here in his line; and great credit is due both of these gentlemen for the painstaking and conscientious manner in which they have performed the important duties entrusted to them.” (Robert Strange was a member of a distinguished Fayetteville and Wilmington, N. C., family active in political and church life; as a civil engineer [c. e.] he had expertise in design and construction.) 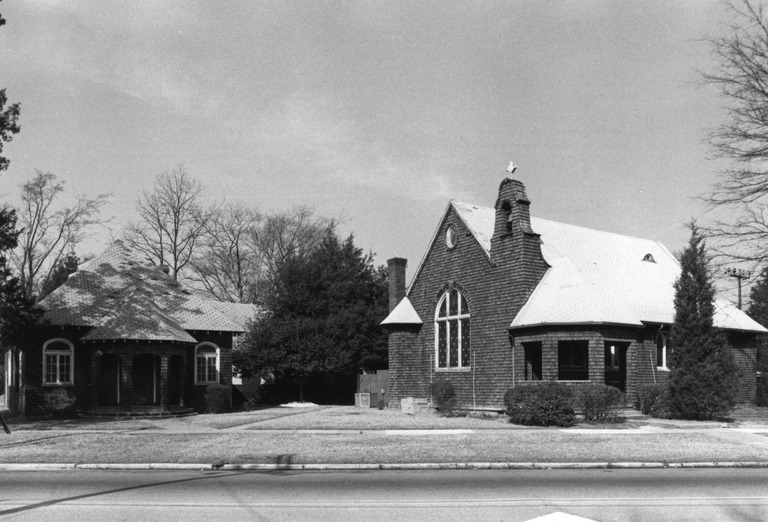