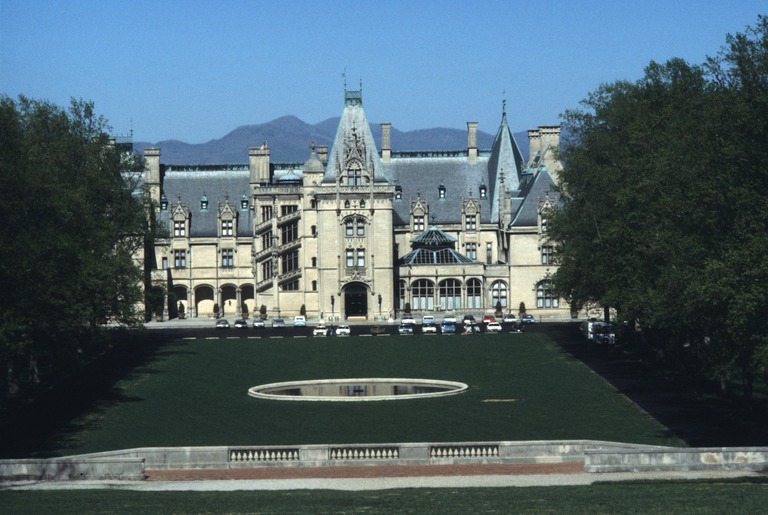 Richard Morris Hunt (October 31, 1827-July 31, 1895), America’s leading architect of the late 19th century, worked in collaboration with the nationally renowned landscape architect Frederick Law Olmsted (1822-1903) to create for George Washington Vanderbilt the immense and nationally important architectural and landscape ensemble, Biltmore Estate, near Asheville, North Carolina. The house proper, designed by Hunt, was built during the years 1889-1895, and the formal gardens immediately next to the house, planned by Olmsted, were laid out and planted at the same time. The vast park surrounding the house and garden, which eventually grew to encompass 125,000 acres, was begun by Olmsted in 1888-1895 and was expanded thereafter. The park and forests became the first full-scale experiment in scientific forest management in the United States.

Both Hunt and Olmsted were at the heads of their professions—and the ends of their distinguished careers—when they created the Biltmore Estate. For both men, it was the opportunity of a lifetime.

Richard Morris Hunt was the leading member of the architectural profession in the nation. Born in Vermont, he was the son of Jonathan and Jane Hunt, who came from families well established and distinguished in New England. After his father’s early death, Richard’s mother took the family to Europe. He took an interest in architecture and became the first American architect to study at the Ecole des Beaux-Arts in Paris, the principal architectural school in the world. He worked under architect H. M. Lefuel for nine years (1846-1855) before returning to New York to establish an independent career. There he became a leader in his profession and in establishing the American Institute of Architects.

In New York, Hunt attempted to transplant French rationalist design, but by the early 1870s he moved toward the popular High Victorian Gothic, as in the New York Tribune Building, which topped out at 260 feet as the tallest building in the world when it was completed. In 1878 he began planning a large country house for William Kissam Vanderbilt on Long Island, inaugurating a long and fruitful association with a family known for their opulent mansions. He established good relations with his clients that continued throughout his career. His French Renaissance urban mansion for W. K. Vanderbilt in New York City (1878-1883) established a kind of “court style” for the Vanderbilts.

Also central to the creation of the Biltmore Estate was Frederick Law Olmsted, who worked closely with Hunt, and who had known the Vanderbilt family as a neighbor on Staten Island. There in 1848, Olmsted had begun horticultural and landscape experiments that established his career, led to his partnership with Calvert Vaux, and the winning design for Central Park, New York, in 1858. Olmsted planned scores of other major urban parks in New York and elsewhere throughout the nation, as well as landscape plans for private estates, which culminated at Biltmore, one of Olmsted’s last and greatest projects.

George Washington Vanderbilt was the son of William Henry Vanderbilt, and the youngest grandson of Cornelius Vanderbilt, who put together the New York Central railroad system and became one of the world’s richest men. From his father and grandfather George inherited $10 million—a vast sum, but much smaller than what his brothers received: more than $70 million each. George, a bookish young man who remained single for many years, devoted his share of the Vanderbilt fortune to his artistic and horticultural interests, particularly Biltmore, which became his passion.

Originally drawn to Asheville by the mild and healthful winters for which the city was famous, he was captivated by the rolling landscape overlooking the French Broad River, and in the mid-1880s began to purchase parcels of cutover farmland through an agent. Already acquainted with Olmsted from other family projects, as well as with Hunt, George Vanderbilt brought Olmsted to Asheville in 1888 to survey the grounds and advise on development of the proposed estate. Olmsted urged Vanderbilt to develop a formal garden around the proposed house, to farm the bottom lands, and to reforest the cutover areas as one of America’s first experiments in forest management. The concepts suggested by Olmsted evolved into the Biltmore School of Forestry, known as “the Cradle of Forestry” in America.

For the main house and its surrounding buildings, Hunt worked closely with Olmsted in designing the ensemble in keeping with the French Renaissance style identified with the Vanderbilt family. Hunt and Vanderbilt traveled together in Europe in 1889 to visit chateaux and their grounds that inspired their planning. The immense house accommodated both Hunt’s and Vanderbilt’s dreams and the many furnishings and architectural fragments Vanderbilt purchased on his European trips. These imported antiques were combined with new work by such artists as sculptor Karl Bitter.

The Biltmore chateau, built of steel and Indiana limestone with the latest modern conveniences and more than 250 rooms, was the largest house Hunt ever designed. He combined elements inspired from French chateaux—the grand stair, for example, modified from the external spiral stair at Blois; other aspects from Chambord and Chenonceau; and a front axial garden rising to a hilltop “vista” inspired at Hunt’s suggestion by the Vaux le Vicomte chateau grounds near Paris. So extensive were the building activities at Biltmore that a private 3.2-mile railroad spur was constructed to bring in materials, and hundreds of workmen and artisans came from far and wide.

At the time Biltmore was planned and built, George Vanderbilt was single and living with his mother. In 1898 he wed Edith Stuyvesant Dresser, and the couple had a daughter, Cornelia Vanderbilt, who married John Cecil.

Many talented individuals complemented Hunt in planning and executing the great house and its outbuildings. During the project, Hunt was assisted by his son, Richard Howland Hunt, and a young Englishman, Richard Sharp Smith, was superintending architect. Both men continued on the project after the senior Hunt’s death. Smith remained in Asheville to become one of the city’s, and the region’s, leading architects. The Spanish tile artist and builder Rafael Guastavino, famed for his self-supporting tile vaults and arches in edifices in New York and elsewhere, came to Biltmore to make and install tilework, and settled in the Asheville area as well.

In addition to the main house, a great chateau in stone, Hunt planned other buildings in an “estate style” using a brick, stucco “pebbledash”, and half-timbered vocabulary that evoked the traditional architecture of England and northern France. He, and later Smith and R. H. Hunt, planned several farm buildings on the estate in this mode. They used similar motifs in creating the manorial village known as Biltmore Village (1893-1897 and later). Olmstead designed the village layout, and the Hunts and Smith designed the buildings, including the estate office, railroad station, village stores, and numerous houses.

The centerpiece of the village was one of Richard Morris Hunt’s favorite works: All Souls Episcopal Cathedral. One of Hunt’s least known but finest churches, the brick and pebbledash edifice embodies in powerful and sophisticated form the church planning ideals Hunt had long advocated, including the central tower over the crossing and the equality of the four wings of narthex, apse, and transepts forming a Greek cross to maximize the congregation’s participation.

As construction on the chateau neared completion in the spring of 1895, Hunt traveled to Biltmore to join Olmsted and Vanderbilt in having their portraits painted by the fashionable artist John Singer Sargent. The full-height portraits of the two great designers hang at Biltmore. That summer, after a period of declining health, Hunt died, having seen his masterpiece essentially complete. Large collections of his and his associates’ drawings for Biltmore survive at Biltmore Estate and in other major archives. George Vanderbilt’s daughter Cornelia and her husband John Cecil inherited and took over the stewardship of Biltmore. Still in family ownership, Biltmore Estate is open to the public as a privately operated historic site and is one of the principal attractions of Western North Carolina.