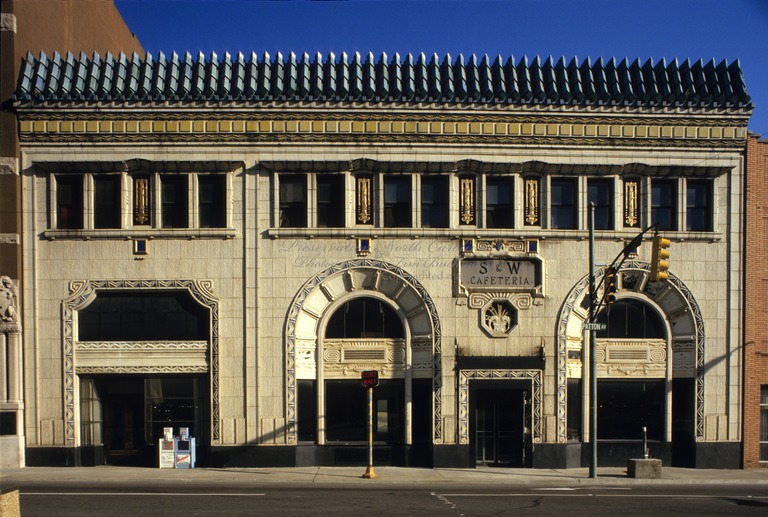 Douglas Ellington was born to Jesse and Sallie Ellington and grew up on a farm in Johnston County, North Carolina, with his two younger brothers, Kenneth and Eric. He was an imaginative child who preferred drawing and painting to athletics. After completing his general education at Randolph-Macon College in Virginia, he studied architecture at Drexel Institute and the University of Pennsylvania before winning the 1911 Paris Prize from the Society of Beaux-Arts Architects, an award that provided for study at the École des Beaux-Arts in Paris. In 1913 Ellington won the Prix de Rougevin, the top honor for decorative competitions at the École, and was the first American ever to do so. He traveled widely while in Europe.

During World War I, he served in the United States Navy, utilizing his artistic skills in the newly formed camouflage unit. The art of military camouflage was developed during World War I to conceal strategic objects and personnel from the newly prevalent enemy aircraft, and many architects, artists, and others participated in creating effective camouflage designs. He later taught in the Beaux Arts influenced architecture programs at Drexel, Columbia University, and the Carnegie Institute of Technology.

Ellington opened an office in Pittsburgh in the first half of the 1920s with his brother Kenneth as business manager, and his work during these years shows a relatively rapid evolution from the classical vocabulary of the Beaux Arts to the modern aesthetic of Art Deco. Ellington relocated his office to Asheville, North Carolina, in 1926, after he was awarded the commission for the First Baptist Church (1925-1927). His design consisted of Neoclassical building forms integrated with decorative patterns and surface ornament that reflected the fashionably modern Art Deco style.

Championed by Mayor John Cathey, Ellington’s design for the Asheville City Building (1926-1928), which was originally conceived with a tandem county courthouse, further combined Beaux-Arts planning with modern stylized decorative motifs that signal his development of an Art Deco idiom specifically tailored to the environment of Asheville. The City Building directly refers to the colors and contours of the surrounding mountain landscape, incorporates Native American motifs, and responds to the rapid modernization of the city.

Departing from the bold new style of Ellington’s City Building the county commissioners rejected his design for the courthouse and chose to erect the large Buncombe County Courthouse in a more conservative classical style from a design by architects Milburn and Heister. But the monumental Asheville High School (1927-1929) took an innovative form, with a hexagonal entry tower from which radiate three equal-sized wings—two for classrooms and the third for an auditorium. The school’s ordered plan and massing play against its rough granite exterior and organic tile and stone accents.

Ellington’s most refined example of the Art Deco style, the S&W Cafeteria (1929), is a colorful, carefully detailed composition of glazed terra cotta panels, slate, glass, and wrought iron topped by a crenellated parapet of green and blue tiles. The brightly colored façade and richly decorated interior dining rooms provided a thoroughly modern venue for the new restaurant type in Asheville. Ellington’s distinctive vocabulary of forms and decorative elements also appears in his less visible commissions such as the understated Merrimon Avenue Fire Station (1926-1927), consisting of highly articulated rectangular masses of rose colored brick, arched truck bays, and a tall training tower at the rear. Robert J. Lewis, funeral home director and chairman of the First Baptist Church building committee, commissioned the Lewis Memorial Park Cemetery Office (1927), a monument-like structure capped by an octagonal roof and flanked by arched gateways with stylized lettering and floral images. Ellington’s 4-story, 65-room Biltmore Hospital (1929-1930) combined brick and stone with little enrichment on the exterior of this modern medical facility. For his own home, the Douglas Ellington House (1926-1930), the architect built onto a log structure standing on the site and incorporated materials salvaged from his other projects. Inspired by European vernacular cottages, he refused to draw plans for the house and employed a trained stonemason along with local unskilled laborers to achieve the romantic informality of the rambling exterior in contrast with the ordered interior spaces. The house was recognized by House Beautiful and Architectural Digest magazines in the 1930s.

The real estate boom of the late 1920s that nurtured Ellington’s creative output in Asheville ended suddenly with the economic depression of 1930, and Ellington moved to Washington, D.C., to serve as principal architect, along with Reginald Wadsworth, for the federally sponsored new town of Greenbelt, Maryland. Ellington and Wadsworth are credited with designing the town’s Community Center and hundreds of housing units. In 1937, Ellington relocated to Charleston, South Carolina, to oversee the reconstruction of the historic Dock Street Theater. He re-established his office in Charleston and designed numerous churches, residences, and government housing projects there, as well as facilities associated with the Charleston Naval Base during the 1940s and 1950s. Although he never lived fulltime in Asheville again, Ellington returned regularly during the summers and, in the late 1940s and early 1950s, worked on a number of residential projects in the Asheville area. He took time to get to know his clients’ needs and tastes over extended visits before beginning a project, and although his later residential work generally lacks the decorative flair of his earlier buildings, the houses bear Ellington’s unique stamp. The Reynolds-Oertling House (1946) on Reynolds Mountain north of town is a rambling 1-story log and stone dwelling with a front stone terrace and 270-degree view of the mountains. The house was built for Senator Robert R. Reynolds and his daughter, Francis Reynolds Oertling. For Kells Castle (1949-1950), the residence of Sanford and Rose Brown, Ellington took inspiration from the Book of Kells in designing the house, using exposed cinder block with red brick banding and accents and a red tile roof. The Stribling House (1954) on Elk Mountain Scenic Highway was conceived with a bold, geometric plan of overlapping circles centered on a large circular living room with a 270-degree view.

Ellington died in 1960 at his home at Chunn’s Cove, and was buried nearby beneath a simple, carved stone of his own design. In reporting his death, the Asheville Citizen-Times of August 28, 1960, recalled that he had come to the city in the 1920s, “and some of this city’s most beautiful buildings were designed by him.” Although some of Ellington’s drawings have been lost, many others survived in the ownership of his niece, Sallie Middleton, and now approximately 320 of his drawings plus photographs and other materials are in the Douglas Ellington Collection, Asheville Art Museum.