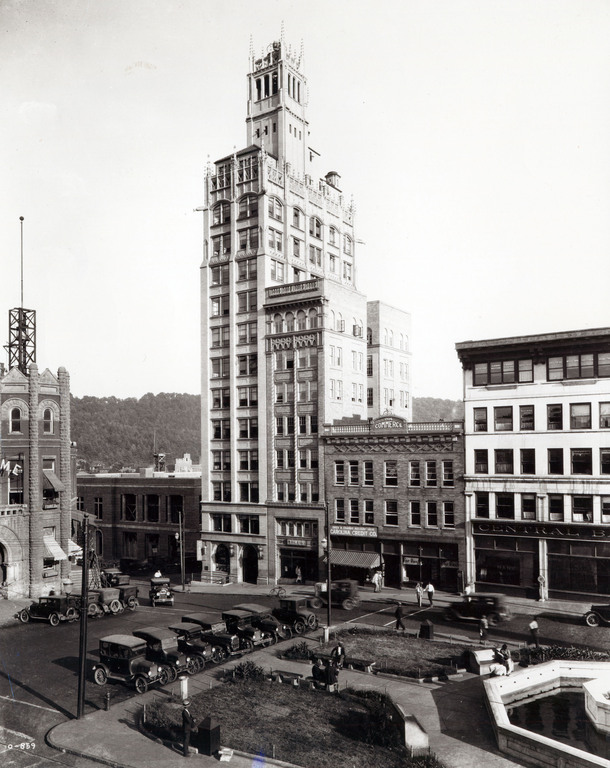 Ronald Greene (May 11, 1891-October 11, 1961) numbered among the leading architects during Asheville’s architectural heyday of the 1910s and 1920s and is best known as the designer of the mountain city’s first skyscraper—the slender, Gothic Revival style Jackson Building (1923-1924). During a long and distinguished career, he frequently took advantage of local publications to promote his practice and worked in a wide variety of styles. Continuing to work in Asheville through the Great Depression and beyond, in 1951 he moved to Gastonia and practiced in that city. He affiliated at different times with other architects including Robert L. Kane in the mid-1920s; W. Stewart Rogers (Greene and Rogers) in the 1930s; and Milton Robelot of Kingsport, Tennessee in the firm of Greene and Robelot of Asheville and Kingsport, formed in 1948. Greene was a founding member of the Architect’s Association of Western North Carolina along with ten other architects from the region and served as its president.

Born in Coldwater, Michigan, to Dr. Lyman and Jennie Greene, Ronald is described in family accounts as having come to Asheville by 1916. An article of 1926 in The Southern Tourist, based on an interview with him, stated that he was educated and worked for a time as an architect in New York and in Cleveland before arriving in Asheville. According to the Asheville Citizen of January 16, 1926, while in Michigan Greene was hired by a furniture manufacturing company to design a factory in western North Carolina in the 1910s and fell in love with the region.

In an article headed “Well Known Architect Locates in Asheville/ Ronald Greene, Once Engaged in Architectural Work Here, Will Locate Permanently,” surely based on information provided by Greene, the Asheville Times of February 28, 1921 gave details of his work in Duluth, where he was “engaged as architect by the United States Steel Corporation” and designed many churches, hotels, residences, and business buildings. “One of the most interesting achievements of the young architect was the removal of the town of Hibbing, Minn. It was discovered that beneath the heart of the city were large and rich deposits of iron ore sufficient to warrant the removal of the entire town, at that time totaling over 16,000 inhabitants.” (As described in Wikipedia, the town of Hibbing was indeed removed from that site and rebuilt not far away; the architect for the rebuilding is not mentioned in that source.) The 1921 article credited Greene with “the erection of hundreds of new residences, apartment houses, a large commercial hotel, school buildings, fireproof hospital . . ., lodge buildings for the Masons and the Elks and a number of commercial buildings [in new Hibbing]. Besides this work, Mr. Greene designed in Duluth a large Gothic church and the country club.” He was reportedly “associated with” a Chicago architect in planning a large apartment hotel in Chicago.

In deciding to return to Asheville early in 1921, Greene was surely aware of the city’s mounting building boom. The Southern Tourist writer of 1926 wound up his interview with the architect thus: “‘And now, Mr. Greene,’ said I, ‘no doubt you came to Asheville for your health, did you not?’ ‘Yes, I did not,” replied Mr. Greene, ‘I came here because I like the mountains and there was opportunity. There was absolutely nothing the matter with my health.’”

The Southern Tourist writer also noted that clients from New York, Chicago, and Cleveland had “come to North Carolina to employ him on their work.” Likely encouraged by Greene, the writer pointed to a statement by national architectural critic Fiske Kimball in Architectural Record, which described recent skyscrapers in New York as lacking in boldness and distinction but said, “A notable exception is the Jackson Building in Asheville, in which Mr. Ronald Greene has arrived at simple and successful composition with Gothic forms.” The Jackson Building instantly became a signature building for the city and the architect.

Working in a broad range of styles and building types with the panache that suited Asheville’s spirit, Greene designed buildings that helped create the city’s distinctive architectural character in the 1920s. These included the Westall Building (1924-1925) adjoining the Jackson Building, the Longchamps Apartment (1925) in a dramatic mountainside chateau form; the classically composed Claxton School (1922-1925); and residences in a wide range of styles from Tudor to Georgian Revival to rustic to bungalows. As developers established suburbs during western North Carolina’s boom years, Greene designed more houses in Chiles’s Kenilworth suburb and served as consulting architect for Sulphur Springs Park near Asheville and Druid Hills at Hendersonville.

After the Crash of 1929, architectural prospects in Asheville dropped off dramatically. Nonetheless, by about 1934 Greene had sufficient work to employ in his office the young architect W. Stewart Rogers, a recent M. A. in architecture from Harvard who had grown up in Asheville. (For a few years Rogers was listed as working for Ronald Greene, Ltd., but by the end of the decade the firm was listed as Greene and Rogers. Works produced during their entire association are cited to Greene and Rogers in the building list.) A welcome project in the mid-1930s was the Howard Gamble House (1935) in Durham, a striking International Style design with rectilinear forms that expressed Mr. and Mrs. Gamble’s interest in modern art and architecture. Its modernist character has been attributed to Rogers and the influence of his Harvard training. The house, quite innovative in Durham and North Carolina at the time, was featured in national magazines and likely inspired several copies. Like most of his contemporaries, Greene also liked to keep abreast of new trends and could work equally happily in revivalist and modern styles. Along with many other architects, Greene and Rogers found work in projects assisted by the Public Works Administration, including Madison Dormitory (1939) in simple Colonial Revival style at present Western Carolina University in Cullowhee.

As the Depression eased, more private work became available, and Greene and Rogers together and separately designed numerous buildings. The firm made sure that Asheville newspaper articles on renewed construction in the mid to late 1930s regularly featured their projects (see building list). One account in 1939 noted “something of a spurt” in home building in the area, including several substantial residences planned by Greene and Rogers in Biltmore Forest and various Asheville suburbs. Especially notable is Greene’s Snowbird Mountain Lodge (1940-1941), one of the last rustic mountain lodges built before World War II. Located on a mountain top amid miles of forested slopes including the surviving old-growth Joyce Kilmer National Forest, it was built for a Chicago travel agent to accommodate passengers on his railroad and bus tours of the mountains.

At the beginning of World War II, Greene and Rogers went their separate ways, with Rogers affiliating with Six Associates in 1942. One of Greene’s notable works in the immediate postwar era was the modernist Annie Reed House of 1948 (a clean-lined, asymmetrical design akin to the earlier Gamble House in Durham), which stood out in its Asheville neighborhood of picturesque residences.

In 1951 Greene moved to the bustling textile manufacturing town of Gastonia. His projects encompassed a wide range of building types from the First Union Bank to several health facilities and residences. Greene attended St. Mark’s Episcopal Church in Gastonia and was a member of the local Rotary Club and a Mason. At his death he left his widow, Louise, of Gastonia, and three children, Mrs. George S. Mackelfresh and Mrs. George D. Wilson of Charlotte, and Nelson R. Green, of Charlotte. He was buried in Gaston Memorial Park.