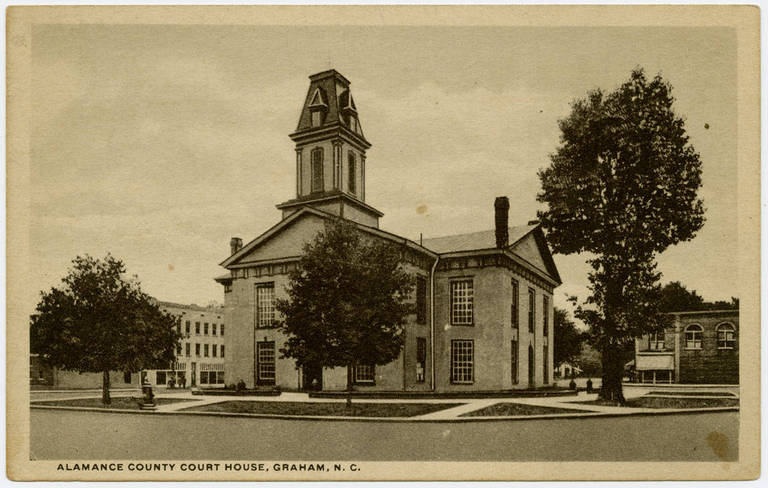 Eli Denny (1805-1876), a house carpenter active in the central Piedmont, is best known because of his association with the Alamance County textile pioneer Edwin M. Holt. Although Denny practiced his trade for many years, only a few of his works have been identified, including Holt’s home (Locust Grove) and the first Alamance County Courthouse, both noted in records kept by Holt.

Little is known of Eli Denny’s early life and training, except that he was a member of a large family of Guilford County Presbyterians. Edwin M. Holt’s diary of 1849 recorded that on March 19, 1849, Denny began construction of Holt’s house (actually an addition to a small, existing house); on April 10 Holt noted, “Commenced laying foundation wall of my house”; on April 19 he noted the election for the division of Alamance County from Orange was held, “Division carried & Alamance County established”; and on April 20, 1849, he wrote, “Raised my new house—a fine day.”

As architectural historian Carl R. Lounsbury has explained, although the house Denny built for Edwin M. Holt was a moderate sized frame structure, it represented a significant new direction in local architecture. Rather than following traditional local forms, Holt obtained the design from the illustrious New York architect Alexander Jackson Davis. Holt’s cotton factory on Alamance Creek, established in 1837, had made him a rich man, connected to other industrialists of the day, and well aware of national trends. More than once he traveled to New York and New Jersey to obtain machinery. Holt had seen in the January 1849 issue of Andrew Jackson Downing’s journal, the Horticulturist, the plan and elevation for a “small classical villa” designed by A. J. Davis for a client in New Jersey. Probably encouraged by his friend, railroad promoter and former governor John M. Morehead (whose villa, Blandwood, in Greensboro, was designed by Davis), on March 2, 1849, Holt wrote to Davis, requesting a modified version of that design, which was built as a front addition to his existing home. As noted above, Denny began construction in March and finished in mid-summer.

It was doubtless through Holt’s influence that Eli Denny gained the contract for the first Alamance Courthouse in 1849. On July 17, 1849, Holt noted in his diary that he had bought three lots in Graham and contracted with Denny to build the new county’s courthouse for a cost not to exceed $6,400. On May 15, 1850, Holt sent his “hands” (slaves) to Graham to help make the brick for the courthouse, and they returned on June 15. Several days later, the ground was broken for the North Carolina Rail Road at Graham, and Holt was elected a director of the railroad. Local history notes that the contract for the 2-story brick structure was awarded to Eli Denny and Company; the brickwork was under the immediate supervision of John and Samuel McClain; and Eli’s kinsmen John and William Denny executed the woodwork. There are other antebellum buildings in Graham that might have been Denny’s work, including the Harden House, which shows a simplified Italianate character in its paired windows, hip roof, and simple curved brackets somewhat akin to Holt’s country house.

Eli Denny also played a role in the creation of another town on the North Carolina Railroad—High Point in his native Guilford County. Named for its elevated position on the North Carolina Rail Road and located at the NCRR’s intersection with the plank road from Fayetteville, High Point was established in the 1850s and developed into a busy industrial community. According to newspaper accounts, in November 1853 Denny bought property at the location and rented a house for his family while he built a family home. “Sketches of High Point” (a history by David L. Clark quoted in the Raleigh Morning Post of November 2, 1905), stated that Denny built the first house in High Point, that of Dr. Robert C. Lindsay, a leading early townsman cited as the person who proposed the name High Point. The first train arrived in 1855.

Becoming a leading citizen of High Point, which was formally chartered in 1859, Denny served as one of the first town commissioners, was a trustee of the community’s first congregation (which was Methodist), and was later an elder in the Presbyterian church. According to an article in the High Point Enterprise of July 11, 1976, Denny and his sons, Washington and William, built High Point’s first Presbyterian church, a simple frame structure of ca. 1859. Denny’s other work in building up the new town has not been identified; little survives of High Point’s mid-nineteenth century architecture.

In 1834 Eli Denny married Serena MacLean of Guilford County, and they had several children before her death in midlife. The 1850 census recorded the widowed carpenter Eli Denny, aged 45, and his children living with his brothers John, 30, and Robert, 28, both carpenters. In 1850 he remarried, to Margaret Doak of Surry County. Mrs. Denny died on January 16, 1859, and was reportedly the first burial in High Point’s civic cemetery. In 1860 carpenter Eli’s household included his children John, 18, William, 16, and Mary, 13. In 1861 he remarried, to Mary Hanner (1819-1871) of Guilford County. Eli was widowed yet again in 1871. He and Mary Denny were buried in the venerable Alamance Presbyterian Church cemetery in Guilford County.