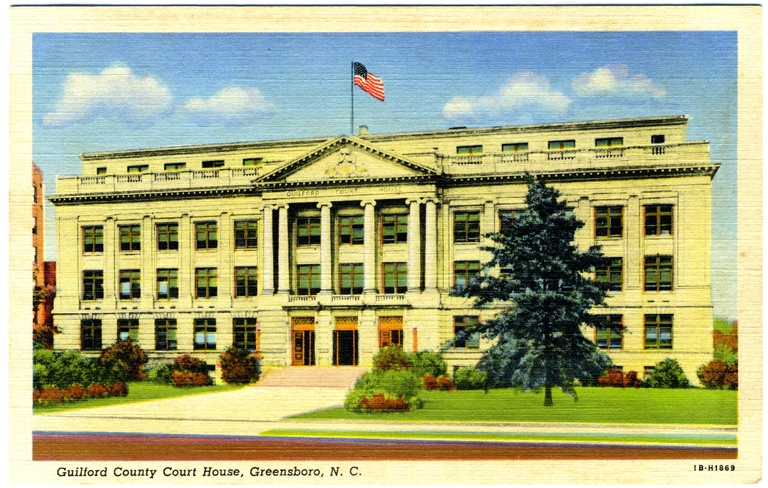 Harry Barton (June 17, 1876-May 9, 1937), a native of Philadelphia, moved to Greensboro in 1912 and became a leader in that city’s and the state’s architectural profession during the early 20th century, planning numerous important buildings and taking an active role in the American Institute of Architects in North Carolina.

Harry Barton was born to Emma Goodwin and Edmund Barton, a building contractor in Philadelphia. Harry attended Temple College and completed a degree in architecture at George Washington University, then did further study at the Beaux-Arts Institute of Design. He practiced in Philadelphia and in Washington, D.C., where for a decade he worked for the Office of the Supervising Architect, United States Department of Treasury, designing federal buildings primarily in the Midwest.

In 1912, Barton moved with his wife, Rachel Phillips Barton, to Greensboro, North Carolina, because “he regarded it as a city with a future and convenient to one of the most prosperous regions in the entire Piedmont section.” There he joined the firm of Frank A. Weston, an architect who had arrived from Denver a few years earlier and designed several downtown commercial buildings and “some of the handsomest homes of Greensboro.”

Barton’s estimate of prospects in Greensboro proved prophetic. Civic-minded and a devoted Presbyterian (becoming an elder at First Presbyterian Church only five years after his arrival in Greensboro), he soon established his own practice with a client base among the city’s industrial and financial leaders. After only a few years in town, he secured the commission for the large, neoclassical Guilford County Courthouse (1918-1920). His long-lasting and prolific practice concentrated in Greensboro but also covered other North Carolina communities. During the flush 1920s, Barton was Greensboro’s leading architect, along with his sometimes competitor Charles C. Hartmann, who arrived in mid-decade.

Like many architects of his generation, Barton worked confidently and skillfully in a variety of styles and building types. During the 1910s, 1920s, and 1930s, he designed classically inspired courthouses and municipal buildings, churches in Gothic and classical modes, eclectic collegiate and high school buildings, Art Deco commercial buildings, and substantial residences that covered the spectrum from the picturesque and romantic to formal Georgian Revival modes. For a leading furniture manufacturer of High Point, he planned the beautifully detailed and luxurious Tudor Revival style S.H. Tomlinson House (Barton’s drawings for the Tomlinson House are in the North Carolina State University Libraries Special Collections Research Center). For the Cone textile manufacturer family of Greensboro he created the Cone Export and Commission Building in an Anglophilic Tudor Revival mode, while for a related Greensboro industrialist he planned the Sigmund Sternberger House in exotic Venetian style. He designed the W.W. Graves House for a Wilson tobacconist in immaculate and conservative Georgian Revival style red brick. For his own residence, Barton adopted a light Spanish Colonial theme.

An important series of commissions for Barton came with the expansion of the present University of North Carolina at Greensboro. In 1921 the state embarked on a vast educational building campaign. College president Julius Foust commissioned Barton to design seventeen of the thirty campus buildings constructed during the 1920s. He planned these in various renditions of red brick Georgian Revival, with the Chancellor’s House an especially handsome example. Many of these were constructed by the J. A. Jones Construction Company of Charlotte. His practice extended beyond his immediate community, as he was awarded prestigious commissions in such eastern North Carolina communities as Fayetteville and Smithfield.

During the Great Depression, Barton stayed in business with public works projects, such as the economically built Alleghany County Courthouse. Shortly before his death in 1937, Barton was developing plans to remodel Greensboro’s old First Presbyterian Church into a civic center, now Greensboro’s Historical Museum, but he died before completing the work.

Over his long career, Barton worked with several junior colleagues including Lorenzo S. Winslow, Stiles Dixon and Albert Carl Wirth. He also collaborated with practitioners of national stature, most notably Hobart Upjohn of New York. Their First Presbyterian Church in Greensboro, a towering Norman Revival edifice for which Barton supervised construction, received an honor award from the North Carolina Chapter of the American Institute of Architects in 1930. (The award program, begun in 1929, continued until 1931, then terminated because of the Great Depression; it was renewed in 1955.)

Barton was one of the first licensed architects in North Carolina. His license certificate, issued in 1915, was #44 in the official registration book of the North Carolina Board of Architecture, one of the early group of men who were licensed in the state based on their having been in professional practice prior to the licensing act of 1915.

Active in civic life and widely respected in his adopted community, Barton was a Mason, an elder at First Presbyterian Church from 1917 until his death, a president of the Kiwanis club, a member of other civic groups, and mayor of Hamilton Lakes suburb where he resided (now a neighborhood of Greensboro). Professionally, he was a member of the national American Institute of Architects; a member of the North Carolina Chapter of the American Institute of Architects, and president in 1932-1933, guiding the chapter through some of the most difficult years of the Great Depression; and secretary of the State Board of Examiners in Architecture. At Barton’s death the local newspapers marked the passing of a man “prominent as Architect, Churchman and Civic Leader.” He was survived by his wife, Rachel, and daughters Eleanor, Emma, and Ruth. Few of Barton’s drawings are known to survive, and most of those are in the hands of the buildings’ owners. There is a small collection of his drawings at NCSU Libraries Special Collections Research Center.