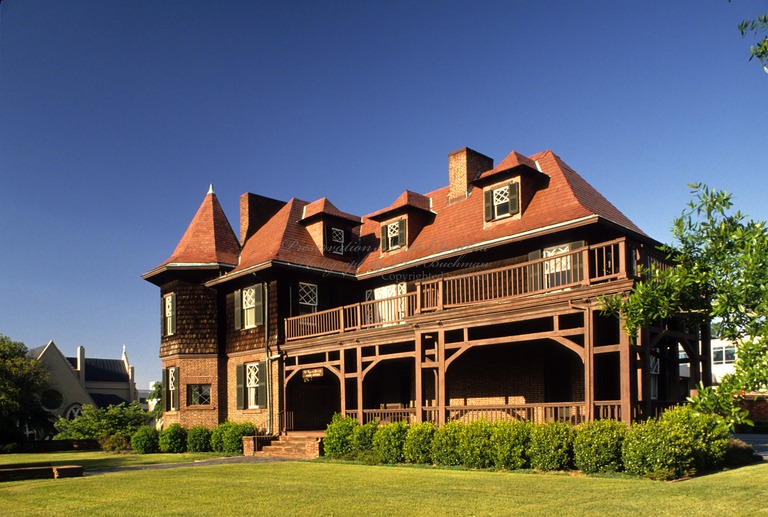 Henry Bacon, Jr. (Nov. 28, 1866-Feb. 16, 1924), best known as the architect of the Lincoln Memorial in Washington, D. C., spent much of his youth in Wilmington, North Carolina, and he designed some notable buildings in the state as a result. The friendships he made in Wilmington as a youth led to several commissions in Wilmington and Linville, a mountain resort established by Wilmingtonians. In contrast to his predominantly classical designs for which he is generally recognized, his little-known North Carolina work displayed his artistic approach to an informal, rustic architecture suited to coastal and mountain settings.

Henry Bacon, Jr., was born in Watseka, Illinois, one of seven children of Henry (1822-1891) and Elizabeth Kelton (1831-1912) Bacon of Massachusetts. In the 1870s Henry, Sr., a civil engineer, moved the family to the Wilmington area. He had been assigned to the Wilmington office of the United States Engineer Department to take charge of construction of the great New Inlet Dam and Swash Defense Dam near the mouth of the Cape Fear River, a major engineering feat (see Bishir and Southern, A Guide to the Historic Architecture of Eastern North Carolina). The family lived in Southport from 1876 to 1880 and moved to Wilmington in 1880.

After graduating from Wilmington’s Tileston School in 1884, Henry Bacon, Jr., attended architectural school at the University of Illinois for a year, worked in a Boston architectural office, and then moved to the prestigious New York firm of McKim, Mead and White. He was involved with that firm in planning for the Chicago World’s Fair of 1893. Subsequently, in partnership with the noted architect James Brite and then on his own, Bacon gained widespread respect and many honors as an architect in the Beaux-Arts tradition. His Lincoln Memorial (1912-1922), for which he won the prestigious Gold Medal of the American Institute of Architects, was by far the most famous of his works, which included important campuses, public buildings, and, in keeping with Beaux-Arts principles, memorials in collaboration with premier sculptors of the day.

Bacon maintained contact with family and friends in Wilmington, including his sister Kate Bacon McKoy. (He suggested a design for a house in Wilmington for Kate and her husband, but the couple chose another plan, which was built by local architect-builder James F. Post.) Although his oeuvre tended toward monumental classical designs, for friends from Wilmington he planned buildings in more informal styles. He designed the Donald MacRae House (1902) in Wilmington in a picturesque Queen Anne-Shingle style. Beyond the city beside the sound, he designed Live Oaks (1913), an octagonal villa for Walter and Agnes MacRae Parsley, wherein he employed a local shell-rock material.

When the Wilmington MacRae family and others developed the mountain resort village of Linville, Bacon designed some of its earliest buildings in an elegant rustic mode suited to the mountain setting. Using the abundant local chestnut bark and natural branches in artful fashion, he planned All Saints Episcopal Church (1910-1913), for which Agnes MacRae Parsley of Wilmington was a major donor. He also designed at least three cottages in similar style. His use of natural chestnut shingles and sheathing inside and out set a local pattern for the distinctive resort community, a mode that continued until the chestnut blight wiped out the great trees.

Bacon also designed two notable memorials in North Carolina: the Women of the Confederacy Monument (1913) on Union Square in Raleigh, with sculptor Augustus Lukeman; and the Gabriel James Boney Confederate Monument (1924) in Wilmington, completed after his death, with sculptor Francis H. Packer. At his death in 1923, Bacon was buried in the family plot in Wilmington’s Oakdale Cemetery; his marker was designed after a classical drawing found on his desk. Although not often recognized in larger studies of Bacon and his contemporaries, for Bacon his Wilmington-related friendships and projects were an important part of his oeuvre and his life. A state highway historical marker in Wilmington, one of the few (possibly the only one) in the state memorializing an architect, recognizes his presence and work in the city.