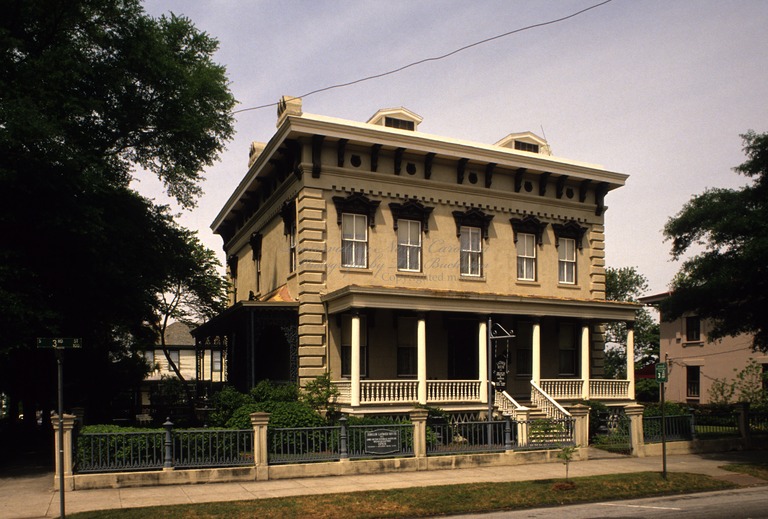 James Francis Post (1818-July 15, 1899), a native of New Jersey, came to Wilmington by 1849 and became the city’s premier 19th century builder-architect during the years when Wilmington was the largest city in the state. He designed, built, or supervised construction of some of Wilmington’s most distinguished buildings, as well building many of the ordinary structures that shaped the overall character of the city. With his frequent associates, Robert B. Wood and John C. Wood (see Wood Brothers), Post gave the port city much of its distinctive Italianate architectural character. Post’s ledger, begun in Petersburg, Virginia, traces his work throughout much of his long career. (James F. Post Ledgers, Ida B. Kellam Archives, Lower Cape Fear Historical Society, Wilmington, North Carolina.)

Born in Fairfield, near Caldwell, New Jersey, Post moved south to Petersburg, Virginia where he married Mary Ann Russell on October 8, 1843, and where the couple had two children, Erastus (who died young) and Thomas. By September 1849 the Posts were in Wilmington where James, Jr. was born. Post may have been to drawn to Wilmington by the city’s building boom after completion of the Wilmington and Weldon Railroad in 1840. Wilmington had become the most populous city in the state, and during the ensuing decades it grew rapidly, maintaining its status among the state’s cities until 1910.

Post obviously suited Wilmington’s needs as it grew in the 1850s. As his ledgers indicate, he promptly found work with prominent citizens such as the DeRosset and Wright families and with the town government. Some of his projects were small carpentry jobs for outbuildings now lost, such as a privy for George Myers (1854) and a kitchen for the Costin family (1855), various repairs and remodelings, and installing shelving or other items. Many projects, though, were for entire buildings. He also began taking commissions that drew upon his growing design skills. In 1850 he provided plans and specifications ($10) as well as constructing a building ($700) for L. A. Hart. And in time he simply provided designs and supervision in his role as architect.

Often Post worked as carpentry subcontractor to masons who took on large projects, such as Joseph Keen or Robert B. and John C. Wood. Post’s association with the Wood brothers produced several Italianate style buildings in the early 1850s, which did much to establish that style’s popularity in the city. Prime surviving examples are the Donald McRae House; the Duncan K. McRae House; the Zebulon Latimer House; and the Edward Savage House. The Woods and Post also collaborated on the New Hanover County Jail designed by Robert B. Wood in 1854, and on the large and elaborate City Hall-Thalian Hall, designed by New York theater architect John M. Trimble, to contain municipal chambers and a civic theater. There the Woods took the masonry contract, and Robert Wood also supplied a new design for the portico. James Post served as supervising architect, providing working drawings, and inspecting workmanship and materials. He earned $4 per day to a total of $3,500.

In the wake of the prestigious City Hall-Thalian Hall project, Post took on a commission for the large and costly Bellamy Mansion, built for Dr. John D. Bellamy and his family on the eve of the Civil War. Unique in the city for its grand colonnade of Corinthian columns akin to the portico of City Hall-Thalian Hall, according to family tradition its design was inspired by an idea from the eldest Bellamy daughter. Post assigned Rufus Bunnell, his young assistant architect and draftsman from Connecticut, to produce the drawings and inspect construction, and Bunnell recorded his experiences during the project, including his work with the black artisans such as carpentry contractor Elvin Artis.

Exemplifying the fluid nature of the building professions in the 19th century, Post’s self-definition changed over the years and varied with the job. He identified himself as a carpenter in 1850 and an architect in 1860. In the 1860s, he also called himself a contractor-builder and builder-carpenter, and from the 1870s on, he typically used the title architect, along with contractor, carpenter, and builder. He used some traditional business methods—often accepting goods and services as payment for work, including building materials, workmen’s time, clothing for his family, and schooling. On the other hand, he adopted the professional architect’s method of charging a percentage of construction as his fee for superintending, as in 1860, when he billed O. G. Parsley 5% of construction cost for superintending construction of stores and a house. Unlike some builders of his day, Post did not engage in building speculation. He owned little property, either in slaves or real estate. From at least 1858 onward, he rented a two-room office in a one-story, wooden building on the south side of Princess Street between 2nd and 3rd Streets. The back room was the drafting room heated by a coal grate; in the front room workmen gathered to collect their pay. From 1885 until his death, he lived with his son James, Jr., on North 7th Street in a house he had designed.

While Post fashioned certain building components locally, he also obtained many items from northern suppliers: in 1852, for example, “5 iron columns” from Heins and Company of Philadelphia; in 1854, iron railings and fencing for the W.W. Pierce House, 30 casks of nails from William Way and Company of New York, and from Hardenbury and Sickels window sash for the observatory of the Wessell-Hathaway House. He also ordered finished woodwork from the north, including in 1855 handrails, balusters and newels from Mitchel and Davis of Philadelphia and window sash and doors from Jenkins and Porter of New York, and a few years later similar items for the Bellamy Mansion, including columns, shutters, woodwork, and other items on the eve of the war. The trade stopped during the war, but by September 1865, Post was doing business as usual with William H. Jenkins, a supplier in New York.

Bunnell’s recollections add detail to the picture of the antebellum builder. Post was by 1858 “a rather portly gentleman,” of medium height with “an open, smiling countenance,” and an active man with a “brisk walk and a somewhat proud bearing.” Bunnell also supplied vignettes of the office operation. On Saturdays, he “had to calculate with Mr. P. the quantities of work done on the buildings during the week, setting the prices to it and writing orders for the money for all the white mechanics and for their masters to draw their money for the labor of their slave mechanics.” Late on Saturday afternoons, “they all white and black, flocked into the outer office room for their pay for working on the various buildings, or ‘jobs,’ that Mr. P. had under his charge.” Post taught the young architect many tricks of the trade, including “various rules for estimating the cost of buildings, such as I had not before come across.” He showed him how to “lay out and draw timber work and framing plans for buildings, which knowledge I personally used for many years . . . until the old-fashioned substantial framing for buildings gave way . . . to the western got-up ‘balloon frames’ that could be nailed together by anybody who could saw up stuff and drive nails straight.”

Confederate records document several specific projects. At Fort Fisher, the massive defensive complex that protected Wilmington from the Union navy and kept the port open to blockade runners supplying the Confederacy, he built five picket houses in 1864, as ordered by General Whiting, for $1,250 (voucher 27), a sum indicative of wartime inflation. Most of Post’s documented wartime projects had to do with maintaining Wilmington’s transportation and trade systems by water and rail, which were essential to the city’s position as a major southern port—and the last one open to Confederate blockade runners bringing supplies into and carry cotton out of the Confederacy.

Following the war, as Wilmington’s economy recovered, Post maintained his position as a leading architect and builder in the community. He superintended such major public buildings (designed by out-of-town architects) as the United States Post Office and Courthouse and the New Hanover County Courthouse. He also engaged in private projects in current styles, such as the Martin-Huggins House (1870) with its Second Empire style mansard roof. For the Seamen’s Home, Post used a mansard roof topped with iron cresting, plus a front “of iron and in the Corinthian order.”

Post’s principal known drawings survive from these late years. One set is for the William B. McKoy House. When McKoy decided to build his house, his brother-in-law, the young architect Henry Bacon, Jr. sent him proposals, but instead McKoy chose a design from the October, 1886, issue of Carpentry and Building and hired Post to customize it for him. In addition, Post signed a rendering for a design proposed for Wilmington’s Masonic Temple, which was also signed by J. K. Vaughan, architect, with whom Post was associated. The two men’s roles in the drawing or the design is not known. The date is evidently November 1894, representing an early stage of planning by the Masons to build a temple in downtown Wilmington. The design is somewhat similar to the winning proposal by Minnesota architect Charles McMillen, who specialized in Masonic buildings, and who planned the Masonic Temple that was erected in 1899.

James F. Post died on July 15, 1899 at the North 7th Street home of his son, James, Jr. The ministers of Grace Methodist Episcopal and St. Andrews Presbyterian churches conducted his burial service; he was buried at Oakdale Cemetery. In his obituary, the Wilmington Messenger of July 16, 1899, reflected, “He has done more than any other man to beautify the city of Wilmington by the hundreds of beautiful homes his taste and skill have designed.”