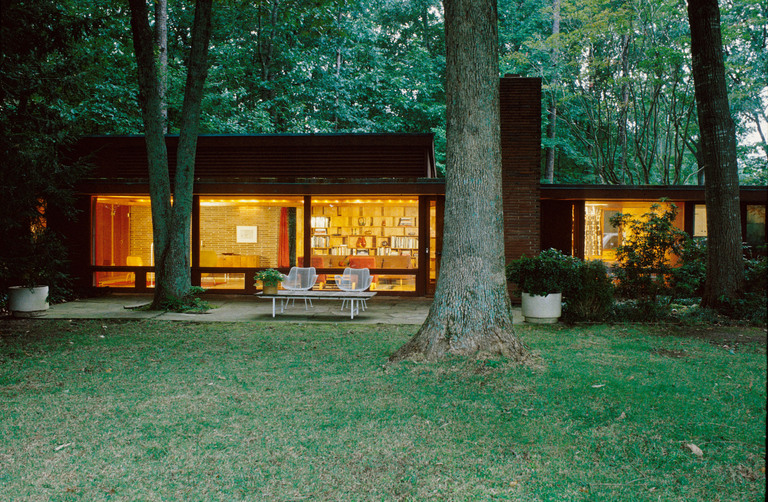 Henry Leveke Kamphoefner (1907-1990), architect and educator, was the founding dean of the School of Design (SOD) of North Carolina State University (NCSU), where he served from 1948 to 1972. During that time, he elevated the school to national prominence. Although he designed few buildings in his adopted state, Kamphoefner had a powerful influence on the architectural profession and the development of modernism in North Carolina.

The son of a Methodist minister, Kamphoefner was born in 1907 in Des Moines, Iowa. His family was of German and Dutch background. In 1930, he completed his undergraduate studies in architecture at the University of Illinois; and in 1931, he received his master’s in architecture at Columbia University. Although Beaux Arts classicism still dominated the curriculum at Columbia, it was there that Kamphoefner received his first serious exposure to modernism. Thereafter, he became a passionate advocate of modern architecture, believing that replicating the designs of the past choked the architectural dynamism of the present. Kamphoefner entered private practice in 1932 in Sioux City and developed a specialty in designing outdoor music pavilions. In 1937, the Royal Institute of British Architects picked his combination Music Pavilion and Outdoor Theatre in Sioux City, Iowa, as one of “America’s Outstanding Buildings” of the post-World War I period. In that same year, the University of Oklahoma appointed him assistant professor of architecture. In 1937, too, he married Mabel C. Franchere (1897-1987), a librarian and native of Sioux City. Kamphoefner’s solid eleven-year career at the University of Oklahoma made him dean material by his late thirties. Yet he felt that the philosophical weight of the traditional Beaux Arts was still too oppressive at Oklahoma, and he dreamed of a chance to revise fully the teaching of architecture.

That opportunity came in 1948 after the trustees of North Carolina State University (then the North Carolina State College of Agriculture and Engineering), tapped him to be the founding dean of a new School of Design. The founding of the school was part of a broader effort to encourage progress in North Carolina in the post-World War II years. The new dean lost no time in asserting his design philosophy in the “State College” catalog for 1948-1949, stating that the School of Design was “devoted to the development of an organic and indigenous architecture; its accompanying landscape architecture and the related arts, to meet the needs and conditions of the southern region.” Henry Kamphoefner purged the old faculty of what he called “incompetent deadwood,” brought in top-ranked leaders in the profession as faculty, revamped the curriculum, instituted a distinguished visitors program, fostered an acclaimed student publication, and placed the School of Design on the leading edge of modernism. Among the more than thirty distinguished individuals he recruited in the first years were former Saarinen associate George Matsumoto; United Nations headquarters design team member Matthew Nowicki; and Eduardo Catalano, from the faculty of the Architectural Association in London. Of the first nine faculty members Kamphoefner hired in 1948, four—George Matsumoto, James W. Fitzgibbon, Edward W. “Terry” Waugh, and Duncan Stuart—came with him from Oklahoma.

The school soon won accreditation. Notable visitors included Ludwig Mies van der Rohe, Walter Gropius, and Kamphoefner’s idol, Frank Lloyd Wright, who had praised him in Oklahoma as an “architectural missionary.” Inventor Buckminster Fuller and architectural critic Lewis Mumford added luster as long-term visiting lecturers. As the original faculty moved on, the dean replaced them with other talented people. They included Robert P. Burns, a native of Roxboro, North Carolina and a Kamphoefner protégé who began as a lecturer in 1959 and rose to head of the Department of Architecture in 1967. As a student at the School of Design, in 1957 Burns won the Paris Prize in Architecture, and he took top honors in his graduate studies at M.I.T. Among the other new faculty members in the 1960s were Harwell Hamilton Harris, former dean of the school of architecture at the University of Texas, and Brian Shawcroft, who strongly shared the design philosophy of the peppery dean. During the Kamphoefner years, five of the school’s students won the Paris Prize. Six students won fellowships to the American Academy in Rome, and faculty and students won three Guggenheim Fellowships and nineteen Fulbright Scholarships. According to Robert P. Burns, by the late 1950s, a national poll of collegiate deans ranked the School of Design as one of the top ten design programs along with Harvard, Princeton, and Yale.

Chief among Dean Kamphoefner’s initiatives was a Department of Product Design, instituted in 1958, the second such program in the Southeast. After seventeen years of prodding the North Carolina legislature, he initiated a graduate program in 1968, which he presented as a way to stop an architectural brain drain from the state and to draw the best graduates of other schools to North Carolina. In May 1963, the Association of Collegiate Schools of Architecture elected Dean Kamphoefner its president. From that national platform he worked with other major organizations such as the American Institute of Architects. After Kamphoefner signed his one-thousandth diploma and retired in 1972, the Association of Collegiate Schools of Architecture presented him as “dean of deans” with a special award for “having furnished more faculty members to other schools of design in the nation than any other design dean.”