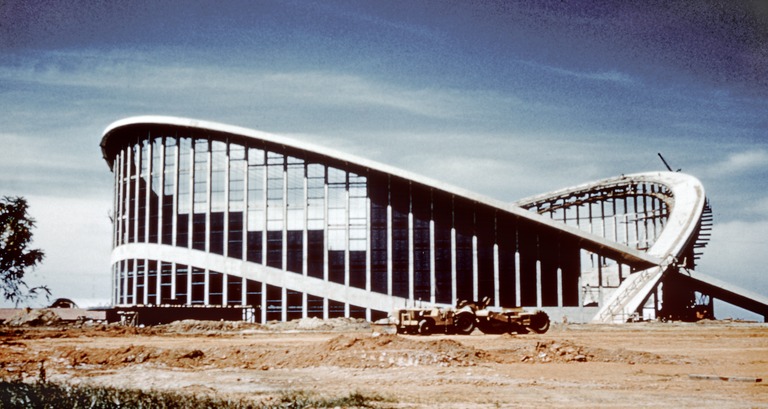 Matthew Nowicki (1910-1950), architect and educator, was a faculty member and acting head of the Department of Architecture at the newly formed North Carolina State College School of Design from 1948 to 1950. An educator, designer, and planner of international scale, his legacy lies mostly in his inspiring influence at the School of Design, his lost potential to alter the course of modern architectural and planning thought and practice, and in the radical design of his one executed commission in North Carolina, the internationally known J. S. Dorton Arena, completed after his death. A sketch artist of exceptional fluidity and skill, Nowicki left behind a wealth of drawings that illustrate his even greater originality and ability as a designer. (Many of these are contained in the Matthew Nowicki Papers in the Special Collections Research Center at North Carolina State University Libraries.)

Born Maciej Nowicki (pronounced “Novitski”) in 1910 in Chita, Russia, he was the son of a well-to-do Polish family. His father was a consul, as well as being the head of the Polish Agrarian party. Due to his father’s position, the family lived in a variety of locations, including a two-year stay in Chicago, where Nowicki learned English. Nowicki entered Warsaw Polytechnic in 1929 and graduated in 1936. Following graduation, he assumed a position as an associate professor at the Polytechnic, and began his own architectural practice. His important pre-war designs included an administration building at Lodz, Poland, a casino at Druskienniki, and a sports center in Warsaw. He also designed Poland’s pavilion for the 1939 World’s Fair. In 1938 he married Stanislawa (Siasia) Sandecka, a fellow student, with whom he was to collaborate on a number of later projects. They had one child together.

Nowicki was briefly an anti-aircraft artillery officer during the Nazi invasion of Poland in 1939. During the subsequent occupation of Poland he taught underground classes in architecture and town planning under the guise of a bricklaying course. Later, he was involved in guerilla fighting around Warsaw, but escaped to the mountains with his family.

At the end of the war, Nowicki was appointed Chief of Planning for the central area of Warsaw. He came to the United States as a technical adviser to the Polish Embassy to enlist American interest in the rebuilding of Warsaw. From there, he was selected to represent the Polish government in the choice of a site for the United Nations headquarters, and later as a consultant to the Director of Planning on the Board of Design for the new UN facilities in New York. Following the complete assumption of control by the communist party in Poland in 1947, Nowicki was unable to return home, and became a visiting critic at Pratt Institute in 1947-1948.

At the recommendation of architectural critic Lewis Mumford, Nowicki was invited to come to Raleigh as a faculty member of the newly established School of Design at present North Carolina State University in Raleigh, where Dean Henry Kamphoefner was organizing a young, modernist faculty. Nowicki was appointed acting head of the Department of Architecture, beginning with the fall 1948 session. Nowicki’s goals as the head of the architecture department were to introduce humanism and regionalism into the architectural curriculum, as part of his effort to counterbalance the requirements of a scientific and technical approach that could sometimes be detached and impersonal, even when interpreted with aesthetic sensitivity.

Dean Kamphoefner encouraged faculty members to remain active in their profession, and Nowicki took full advantage of this opportunity. He worked on a number of North Carolina projects as a consultant to the firm of William H. Deitrick. These included interior and textile design for the new Modernist Carolina Country Club in Raleigh (done with Stanislawa Nowicki), and schematic designs for a new State Museum of Art, Science and History (Unexecuted Project).

In 1948, North Carolina State Fair manager J. S. Dorton approached Dean Kamphoefner with a desire to make the N. C. State Fair the most modern plant in the world. Kamphoefner introduced Dorton to Nowicki, and the two men developed a close and friendly working relationship. Nowicki produced a series of studies for the development of a variety of facilities at the State Fair grounds in Raleigh, including a velodrome (a bicycle race track), a racetrack, and an elevated midway (North Carolina State Fair Grounds (Unexecuted Project)). Dorton was able to secure a $1.5 million dollar appropriation from the legislature for a new livestock-judging pavilion, with the commission going to Nowicki in association with Deitrick. This was to become Nowicki’s only executed building in North Carolina.

Earlier, Nowicki had sketched a design for a circular suspended roof structure as a new parliament building for Warsaw. With Dorton’s encouragement, and working with structural engineer Fred Severud of Severud, Elstad, and Kreuger of New York (later the engineers for Madison Square Garden and the Gateway Arch in St. Louis), Nowicki sketched a plan for the Raleigh arena whose form was determined by two sloping parabolic arches of reinforced concrete intersecting near the ground, the arches being connected below grade at either end and suspended above by a number of cables running from arch to arch. The cable structure additionally would act as a support for the roof membrane. As Nowicki wrote to his wife at the time, he had “escaped from the European cliché of post and beam.” Nowicki’s conceptual designs do not clearly indicate how, or even if, he proposed to enclose the outer walls of the building. His sketches show dynamically out-sloping columns at the sides supporting the interior floor and seating structure.

As executed after Nowicki’s death by Severud and Dietrick, the building received a vertical outer curtain wall of glass and steel. The arena won widespread recognition, including the First Honor Award of the American Institute of Architects and the Gold Medal in Engineering of the Architectural League of New York, and a model was exhibited at the Milan International Exposition of Modern Decorative and Industrial Arts and Modern Architecture in 1957.

In 1949, Nowicki also collaborated with Eero Saarinen on the development of a campus masterplan and a series of building designs for the newly-organized Brandeis University in Massachusetts. This plan was only partially executed.

On the international front, Nowicki associated himself with Albert Mayer of the New York firm of Mayer and Whittlesey in the design of an urban plan for Chandigarh, the new capital for the state of Punjab, in India. Nowicki and Mayer provided an overall geometric order in their city plan, which was inflected at the neighborhood level to respond to topography, prevailing winds and proposed uses. Although the pair was not hired to produce architectural designs, Nowicki spent two months in India absorbing Hindu culture and waiting for the local planners to organize themselves, during which time he produced a number of detailed sketches for structures to be built in the new city.

On his way back to the United States in 1950, Nowicki was killed in a plane crash near Cairo. The successor to Nowicki and Mayer was the French architect Le Corbusier, who retained their overall plan while changing their Garden City-inspired curvilinear neighborhood designs to a formal grid. Le Corbusier did, however, retain Nowicki’s palette of native stone and concrete for his subsequent buildings. His design for the arena in Raleigh was completed by Deitrick’s firm and opened for use for the State Fair of 1952.

Nowicki’s Dorton Arena gained widespread and long-lasting admiration in the state and beyond, becoming one of the few North Carolina buildings that are internationally recognized. The extraordinary hyperbolic paraboloid structure was echoed in a number of subsequent “saddle dome” designs produced by architects around the world in the 1950s and 1960s. For mid-20th century North Carolina, it was a bold emblem of modernity and progress, and it has been a celebrated icon of modern architectural design since the day it was built.