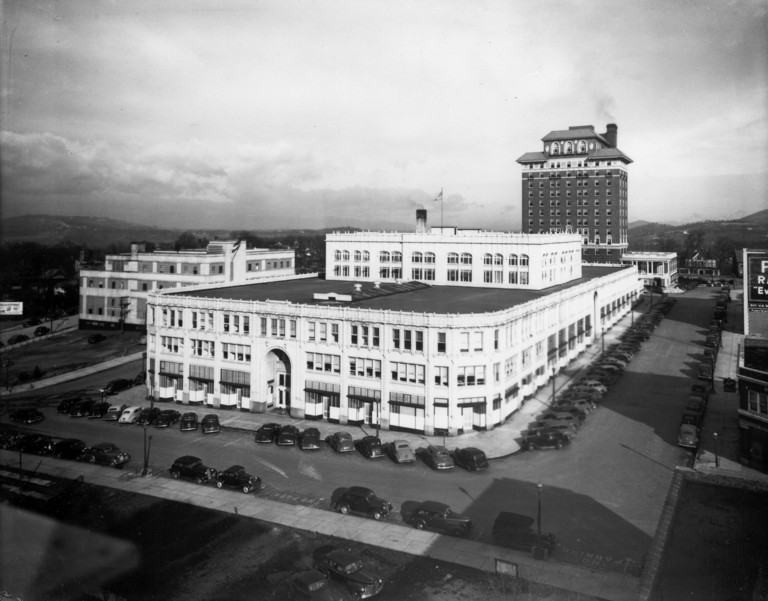 Charles N. (Newton) Parker (October 29, 1885 -July 30, 1961), architect, practiced in Asheville for many years and is best known for the Grove Arcade complex built at the height of the city’s pre-Depression boom era. A native of Ohio, he came to Asheville as a young man in 1900 and spent his career there, working briefly with Smith and Carrier (Richard Sharp Smith and Albert Heath Carrier) and then on his own. Although his work included all types of buildings, he specialized in houses in the Tudor Revival and other picturesque modes popular in the mountain city’s planned suburbs of the early 20th century.

Charles Parker was born in Hillsboro, Ohio, the son of John Milton Parker and Carolyn (Caroline) Holmes Parker. In 1900 the United States Census recorded him as living in Hillsboro with his widowed mother and his older brothers and sisters. The eldest son, Harry Lewis Parker (1878-1947), had left home in the 1890s and worked briefly in Raleigh before moving to Asheville in 1898 at age 20, where he worked for the city engineer and a private engineering firm. Encouraged by Harry, in 1900 Charles and his brother Leslie and sister Clara moved to Asheville, and their mother followed them about 1904 to 1906. In 1910 the United States Census listed Carolyn (Caroline) as a widowed head of a household in Asheville that included Harry, Clara, Anna, and Charles. (Leslie had died soon after moving.) As Charles’s daughter recalled, Charles built a “neat little chalet” at 70 Furman Avenue for his sister Clara and his mother, Caroline (d. 1926). He lived there until he met and married Julia Maynard of Georgia in 1928. He built their home at 54 Ridgewood Place, where the couple raised their family and he lived until his death.

Upon arriving in Asheville, Charles Parker fell in love with the mountain region and spent much time hiking and exploring the landscape. He worked for a time as a surveyor in western North Carolina, and then was employed as a draftsman by the city of Asheville in 1906-1907. From about 1909 to 1913 he was a draftsman for Smith and Carrier, one of the leading architectural firms in Asheville and western North Carolina. From Smith, an Englishman who was supervising architect at the Biltmore Estate and Biltmore Village (see Richard Sharp Smith), Parker gained expertise in the firm’s sophisticated and picturesque vocabulary of half-timbered and pebbledash houses. He continued in this mode throughout the 1920s. There is no evidence that Charles Parker received any formal education in architecture; he came to Asheville immediately after high school and evidently learned his architectural skills on the job. He became active in his profession and was a founding member of the Architect’s Association of Western North Carolina.

In 1913 Parker began working on his own as an architect, as indicated in Asheville city directories, and in 1916 he was advertising his services in the Asheville Citizen (November 5, 1916). According to his obituary he maintained a connection with Smith and Carrier until 1918. Probably his first project was a remarkable group of romantically picturesque cottages he designed for Rose Mary Byrne in the small Sunset Terrace [Sunset Terrace Cottages] development, which was laid out along a steep hillside by his brother Harry. Combining elements of Craftsman, chalet, and English cottage styles, Sunset Terrace had cottages called Rosemary (1913); Primrose (1913); Rambler (1915); West View (1915); Blossoms (1915); and Violet (1920), plus a seventh never built. In this same period, Parker was commissioned to plan the large new hotel, the Kenilworth Inn II, to replace a predecessor that burned. The Asheville Citizen of September 22, 1916, reported that Parker had drawn up plans for the 150-room hotel, but thereafter his name was not connected with the project, in which Asheville architect Ronald Greene was more directly involved.

Parker was one of the first licensed architects in North Carolina. His license certificate, issued in 1915, was #28 in the official registration book of the North Carolina Board of Architecture, one of the early group of men who were licensed in the state based on their having been in professional practice prior to the licensing act of 1915.

Probably through his brother Harry, Charles Parker won important patronage from Edwin W. Grove, a major figure in shaping Asheville in the 1910s and 1920s. In 1913, Harry had begun work as manager and chief engineer for developer Grove in an association that continued until the latter’s death in 1927. Grove (1850-1927) was a drug manufacturer from Tennessee who built a summer home in Asheville about 1897 and became a developer on a grand scale. About 1905 Grove began planning the ambitious Grove Park residential development on the north side of town for which Harry Parker laid out the streets and did other planning work. (Grove Park was adjacent to Sunset Terrace.) Grove’s massive, stone Grove Park Inn on Sunset Mountain and the adjoining golf course became the centerpiece in 1913. Sections of the Grove Park development, each carefully planned, were built in stages into the mid-1920s. While Harry laid out the neighborhoods, for his “designed neighborhood,” as Charles’s daughter recalled, Grove “hired my father to approve the plans for the houses to be built and thus my father received the commission to design many of them.” In addition to his work for Grove, Parker captured public attention when he designed the Arch of Triumph (1919), a grand archway on Patton Avenue that welcomed home parades of World War I veterans.

Parker also gained a clientele among the founders of Biltmore Forest, a prestigious suburban community established in 1920 around a golf course on 1,500 acres from the Biltmore Estate, and filled with luxurious residences by the period’s leading local architects. Parker planned the Thomas Wadley Raoul House (ca. 1922) for the president of the development company and the Junius Adams House (1921) for another founder. These, like others of his designs, display a Tudor Revival style that carried forward the English spirit established by R. S. Smith at Biltmore Village and elsewhere in Asheville. The Walter P. Taylor House (1925-1926), a rambling stone house of Tudor Revival manorial style, and others are also documented or attributed to Parker.

Charles N. Parker’s most famous project far exceeded any of his other known works in scale and cost: the Grove Arcade (1926-1929), a last project by Edwin W. Grove. The immense arcade building is covered in glazed terra cotta, richly detailed in molded decorations of Tudor Gothic Revival spirit, including a depiction of a medieval architect—(with Parker’s name inscribed)—and his architectural tools. The interior is lavishly finished in similar style. It covers an entire city block and was planned to include a skyscraper tower twenty stories tall.

For the arcade, developer Edwin W. Grove had acquired a large downtown tract that included the 19th century Battery Park Hotel on a tall hill. Grove tore down the hotel, decapitated the hill, and filled in the valley in front of it. According to Harry Parker’s obituary, this great project was Harry Parker’s idea. Grove built a new Battery Park Hotel (see William Lee Stoddart) at the upper end of the site, and where the valley had been, he sited a massive arcade building that was designed as the base of a skyscraper tower. Grove employed Charles Parker as architect, and work began on the project.

But in 1927 Grove died and the project halted, far from complete. The property was sold, and in 1929, on the eve of the Great Depression, the arcade was completed by a new owner, Walter P. Taylor, but without the skyscraper originally planned. Because of these events, Parker never received full payment for his work. His daughter, born in 1932, recalled that the topic of the Arcade project was not a happy one and was seldom mentioned in their family in her hearing. “My memory association of the Arcade is walking up the ramps as a small child, holding my father’s hand and then running back down.” With the crash, other clients also failed to pay Parker for work he had completed. Rather than opening doors for Parker’s future career, the great arcade marked the end of an era of great building in the city.

As for most architects, particularly in Asheville where the impact of the Depression was especially severe, Parker’s opportunities dropped off drastically. He cut back his practice to a one-man office on Wall Street overlooking Pritchard Park, designing mainly small houses, while his wife went to work as a schoolteacher. In 1940, Parker found work at Camp Lejeune near Swansboro, North Carolina, on the coast. “Lejeune was just being built at the time and my father’s first drafting room was in a tent,” recalled his daughter. He continued at Lejeune through World War II. The family spent vacations with him there but returned to Asheville for Mrs. Parker to continue teaching during the school year. After the war, Parker returned to Asheville and worked for Six Associates (an Asheville firm formed by several area architects in order to gain wartime projects), which became a major firm in the region. He retired from active practice about 1950. Always a great lover of the mountains, Parker remained in Asheville for the rest of his life and was buried in Forsyth, Georgia, his wife’s home. In Asheville, many of his fine houses still stand, and his chief landmark, the Grove Arcade, has been restored for new use as a center of enterprise in the city.