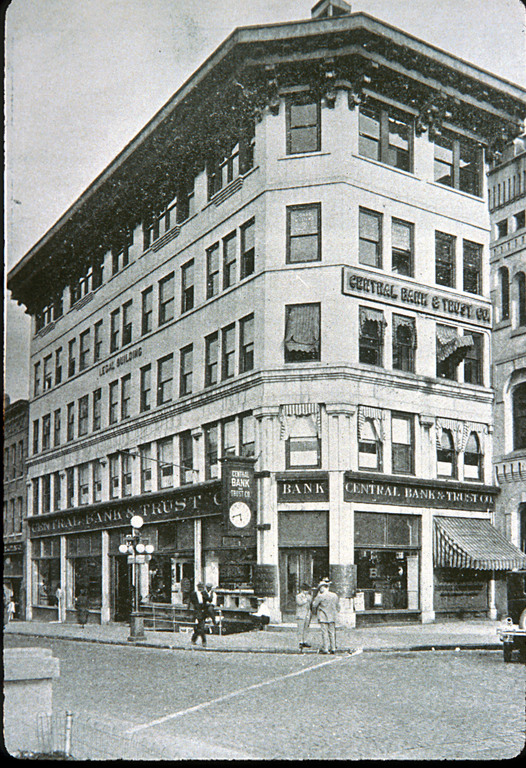 Albert Heath Carrier (1878-1961), developer, inventor, and lumberman, was an architect in Asheville whose architectural career was devoted almost entirely to his partnership with Richard Sharp Smith in the firm of Smith and Carrier from 1906 to 1924. This firm, together with Smith’s initial independent practice that began ca. 1896, designed roughly 700 projects in Asheville and throughout western North Carolina, ranging from residential to commercial to public structures and embracing a broad variety of styles and materials. Their commissions also included some remodeling on the Vanderbilt mansion, Biltmore, for which Smith had been supervising architect during construction. Among the junior architects employed by the partnership were Charles N. Parker (ca. 1909-1913), who then practiced independently in Asheville, and Joseph D. Rivers (ca. 1923-1924), who next worked with William H. Lord in Asheville before moving to central North Carolina.

Heath Carrier, as he was known, was born in Michigan to a family originally from Pennsylvania, which had engaged for several generations in lumbering and milling. Heath’s father, Edwin George Carrier (1839-1927), began in partnership with his father in Summerville, Pennsylvania, formed his own lumber company nearby, and moved in 1874 to Bay City, Michigan, where he bought out an older brother’s lumber company. In 1885 E. G. Carrier moved to Asheville and retired from the lumber business. At the time of the move, Heath Carrier, his next-to-youngest son, was 7 years old. One of many entrepreneurs attracted to railroad era Asheville, E. G. Carrier bought land that subsequently formed much of West Asheville, began building there in 1886 the Asheville Sulphur Springs Hotel, and in 1889-1891 constructed a streetcar line from the hotel to central Asheville, a hydroelectric plant to power the streetcars, and a steel truss bridge over the French Broad River to carry pedestrians, streetcars, and other vehicles. In the early 1890s a fire destroyed the hotel, a flood ruined the hydroelectric plant, and a freeze devastated his orange orchards in Sanford, Florida, and E. G. Carrier returned to the lumber business, this time in Duplin County, North Carolina.

Meanwhile, Heath Carrier was educated at the Ravenscroft School in Asheville and the Davis Military School in Winston-Salem; he did not attend college. Instead, he and his younger brother, Ralph (who had studied civil engineering at North Carolina State College), were given the Duplin County sawmill as the “Carrier Brothers Lumber Company” in accord with E. G. Carrier’s practice to set up his sons and sons-in-law in various businesses. There Heath gained an intimate knowledge of lumber characteristics and variations, construction techniques for mill and village, and developed pragmatic approaches to practical problems.

Family stories of how Carrier met R. S. Smith are undocumented. By the first decade of the 20th century, Smith had so much work that he needed a partner in his office. A surviving letter to Carrier from a friend, dated 1903, commented on Smith making Carrier an offer only to be rejected. On May 24, 1905, Smith wrote to Carrier in a letter that was evidently part of a series between the two men. He listed two dozen projects under way or under contract plus “school work” for the city. “All of this work I am handling single handed, but under an awful tension to the nervous system.” He proposed a partnership in which Carrier would “put up $1000.00 cash for half interest in my business,” and they would share profits and assets according to certain terms, including the stipulations that Smith would retain ownership of the office furniture he already had, and that he would collect and keep the payments for work contracted for before the partnership began or with plans already completed. Carrier may have welcomed the opportunity to return to Asheville because of his marriage late in 1903 and the birth of a daughter in October 1904, circumstances making the isolation of Duplin County less acceptable. After further negotiations over the details of the partnership, in May, 1906, the two men signed an agreement to form Smith and Carrier, with Smith granting equal partnership in assets and profits to Carrier on payment of $1,500.

This partnership continued for 18 years with mutual respect and amity. Smith tutored Carrier in architectural esthetics; Carrier emphasized materials and conservative construction practices; usually both agreed. Carrier’s interest in materials extended from treated woods (such as the fumed red oak in the William Jennings Bryan House), to his advocacy of reinforced concrete and robust foundations and piers sufficient to carry future expansion (as in the Technical Building), to hollow tiles, which he advocated for their strength and fire proof qualities, as shown in his correspondence with E. W. Grove for cottages at the Manor, a hotel Grove bought and was expanding. Although Carrier did not develop a style that was distinctively different from Smith’s, he favored strong vertical and horizontal lines with modest decoration and was less enamored of pebbledash exteriors than Smith. According to family recollections, Carrier was also more willing to comply with a client’s wishes than was his partner.

Carrier not only attracted associates as clients—most notably E. W. Grove—but was himself a client. Smith and Carrier’s offices were housed in at least two buildings Carrier and associates owned: the Majestic Theater (later the Paramount Theater) and the Overland-Knight Building. (In the latter, which still stands, an exposed steel beam still bears the fabricator’s label “Smith & Carrier #311.”) Smith did not join with Carrier in these business enterprises, although a letter from Smith dated 1921 proposed that they build two houses for subsequent sale on a lot Carrier owned.

When Smith died in 1924, in accord with their initial agreement, all the firm’s assets, after division of current accounts receivable (these totaled $4,665 from seven clients), passed to Carrier as the surviving partner. The assets included the right to continue use of the name “Smith & Carrier.” On October 6, 1924, Carrier wrote to his daughter Catherine that he still had “plenty of work in the office to keep me busy most of the time.” One possible project was a garage on Valley Street. He also speculated that he might get a commission for a school, “the best one the county will build, and the only one I would consider.” He noted that “Albert Wirth, an architect from Greensboro,” was coming on October 10 to help Carrier as needed and would also take on work “on his own account.” It was this connection that brought Albert Carl Wirth to Asheville, where he continued to practice for several years.Although Carrier completed works then proposed or in progress, he soon closed the office and abandoned the practice of architecture beyond a few personal projects. At his country home in Gerton, North Carolina, a village near Asheville, he expanded a shingled farmhouse with a 30-foot living room paneled with chestnut from trees killed by the chestnut blight; he also built a small commercial building in the village; and he constructed a beach house in Ft. Myers, Florida.

There were several reasons for Carrier’s retirement from architecture at age 47: the death of his mother that year and his joining his widowed father in Albany, Georgia, where the elder Carrier was involved in peanut farming; his focus on real estate development in Asheville and Ft. Myers, Florida, as well as Georgia agriculture; and his longstanding devotion to inventions, an enthusiasm he maintained until his death.

Carrier held a substantial number of patents for his inventions. Especially pertinent to architecture was the “Carrier Quadrant Casement Adjuster” that pivoted a casement window on a vertical axis a few inches from its edge, this offset making it possible to clean both sides from the interior, and, with the pivoting driven by a crank turning a worm gear, the window could not be pulled open from the outside. The casement adjuster sold well from California to New England, although profits were modest. The offset principle is now commonplace in casement windows. This and other projects were developed with financial support from E. W. Grove, an entrepreneur in a multitude of fields; Grove’s death in 1927 dampened commercial exploitation of Carrier’s inventions.

From the mid 1930s onward, Carrier divided his time between winters in Ft. Myers and summers in Gerton. His daily routine in summer included walks through the woods with dogs and grandchildren (including the author of this biographical entry), teaching these children to draw house plans, and himself interminably sketching various devices on graph paper held in a clipboard. Despite his peripatetic course, Carrier considered himself primarily an architect, was proud of his membership along with Smith in the American Institute of Architects, and enjoyed pointing out “his” buildings when driving through western North Carolina with family members. He probably would have been pleased that three relatives in succeeding generations followed him as architects.