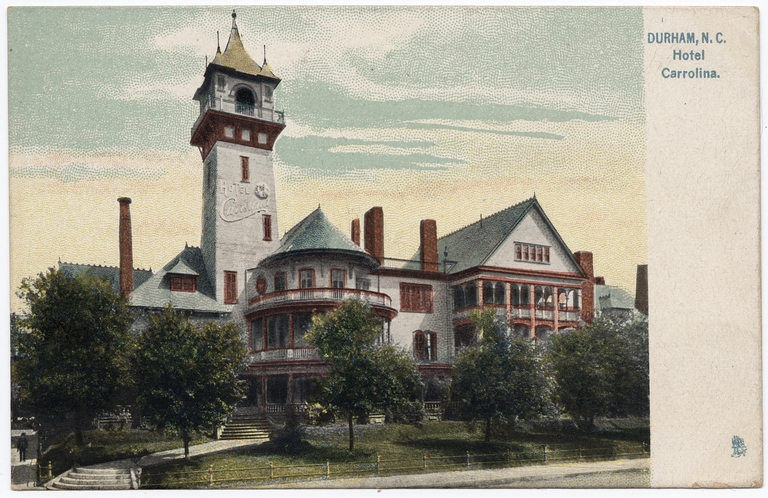 Gottfried L. Norrman (1846-1909), a Swedish-born architect active in the post-Civil War South, designed opulent Queen Anne-style edifices in North Carolina’s New South cities, all of which have been lost. Norrman was educated in Scandinavia and Germany before moving to New York City and, around 1879, to Spartanburg, South Carolina. He relocated to Atlanta in 1881 and had a distinguished career as a New South architect whose work extended into South Carolina, North Carolina, Alabama, and Florida.

In Atlanta, he planned some of the city’s first full-blown examples of the Queen Anne style, designed buildings for Atlanta’s three great expositions in 1881, 1887, and 1895, and worked in all the prevalent styles of the era including Romanesque, Shingle, and Colonial Revival. (In 1890 North Carolina architect A. G. Bauer worked briefly for Norrman in Atlanta.) An advocate of architectural professionalism, in 1892 Norrman was a founder of the Southern Chapter of the American Institute of Architects (AIA), and in 1906 he helped establish the Atlanta Chapter of the AIA, serving as its first vice president. Shortly before his death, Norrman became partners with Hal Hentz and J. Neel Reid, who continued distinguished practices for many years.

In North Carolina, Norrman gained commissions for a few key buildings in the booming towns of Charlotte and Durham, designing bold examples of the dramatic and eclectic styles of the day for leaders of the New South economy. Most imposing was the Charlotte City Hall (1890-1891), a grandiose brick building in an eclectic Romanesque-Baroque-Jacobean style with baroque entrance, stepped gables, and an immense multi-staged tower. It housed all city services, including the police and fire departments. Charlotte entrepreneur and developer Edward Dilworth Latta hired Norrman and famed Atlanta landscape architect Joseph Forsyth Johnson to help plan Dilworth, Charlotte’s first suburb. For its 90-acre park, Norrman designed the Latta Park Pavilion in “English rustic” style, which included a ballroom, billiard and bowling facilities, and a groundskeeper’s lodge and conservatory. Norrman was mentioned in promotional pieces about Dilworth in Georgia newspapers. He also designed one (unidentified) house in Charlotte in 1890 and possibly others.

In Durham, Norrman designed the Hotel Carrolina (1891-1892) for tobacco magnate Julian S. Carr. A rambling, towered Queen Anne style frame building that began as a remodeling of Carr’s Hotel Claiborne, the grand hostelry had seventy rooms and multiple broad verandahs. Although he may have planned other buildings in Durham, Charlotte, and elsewhere, thus far no others have been identified.