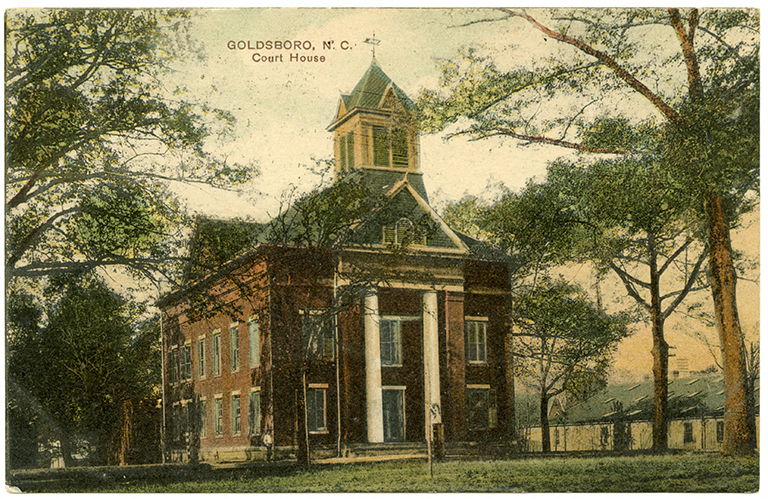 John Everett Becton (1813-1897) was a Wayne County farmer and contractor best known as the contractor for the antebellum Wayne County Courthouse and Jail. According to his obituary, he was both a farmer and a “mechanic of highest order,” with the courthouse and jail in Goldsboro to his credit. He was evidently one of many building artisans who also engaged in agriculture and identified themselves as farmers, grounded in their ownership of farmland and other property.

In 1848, architect Benjamin Gardner of Wilmington provided the design and specifications for the Wayne County Courthouse and Jail in the newly established county seat of Goldsboro, which was located on the Wilmington and Weldon Railroad at its junction with the North Carolina Railroad. The construction contract—for $6,300 for the courthouse and $2,600 for the jail—was awarded to John E. Becton of Wayne County.

(Note: Becton and his half-brothers Joseph and John Kennedy and one James Sasser bound themselves to the court in the amount of $17,800, to guarantee the contract. Some accounts have identified all of these men as the builders and the large sum as the cost of the project; in actuality Becton was the contractor and the other men joined with him in putting up the bond, a typical arrangement. Having the bond so much greater than the contracted cost provided protection to the county if not the contractor.)

The contract that accompanied the specifications stipulated that in case of any disagreement between Becton and the building commissioners, architect Benjamin Gardner would decide the matter. But Becton insisted on a further stipulation that placed more power in the hands of respected building artisans. He required that any disagreement would be referred to Gardner plus builder John Berry of Hillsborough, and if those two could not agree, builder Dabney Cosby was to serve as umpire. Completed in 1850, the Greek Revival style courthouse featured a portico with columns in antis, a brick cornice painted to imitate granite, and a square belfry housing a clock.

John E. Becton was the son of Sarah Everett and Frederick Edmond Becton, both of large local families. After her husband Frederick’s death in 1813, Sarah remarried, to John Kennedy of another established family, and had 12 children with him. Becton grew up as part of that plantation household. In 1838, Becton was one of the delegates from Wayne County at the Internal Improvement Convention in Raleigh (Weekly Raleigh Register, Dec. 31, 1838). With his half-brothers, John Thomas Kennedy and Joseph Kennedy, John E. Becton contracted in the mid-1840s to lay the roadbed for several miles of railroad, using enslaved workers for the purpose, a common practice in antebellum railroad constructing. In 1850, Becton was one of several Wayne County Whigs appointed to serve as delegates to the state convention of the party (North Carolina Telegraph [Goldsboro], May 23, 1850). He was also active in the Wayne County Agricultural Society (Goldsboro Republican and Patriot, July 5, 1853). His wife Eliza died in 1850 and John subsequently married Elizabeth Jane Kornegay, with whom he had at least two children. Becton evidently does not appear in the United States Census of 1850, and in 1860 he was identified as a d farmer aged 47 and owner of substantial real estate and personal property including several slaves.

Late in life, Becton moved west to be near his children who had already moved there. He died suddenly in 1897 while residing with his son William in Disark, Arkansas. The report of his death carried in the Goldsboro Weekly Argus of March 25, 1897, recalled that he was “a good farmer and mechanic of highest order, in his palmy days. The Court House and jail of Goldsboro are his work.”