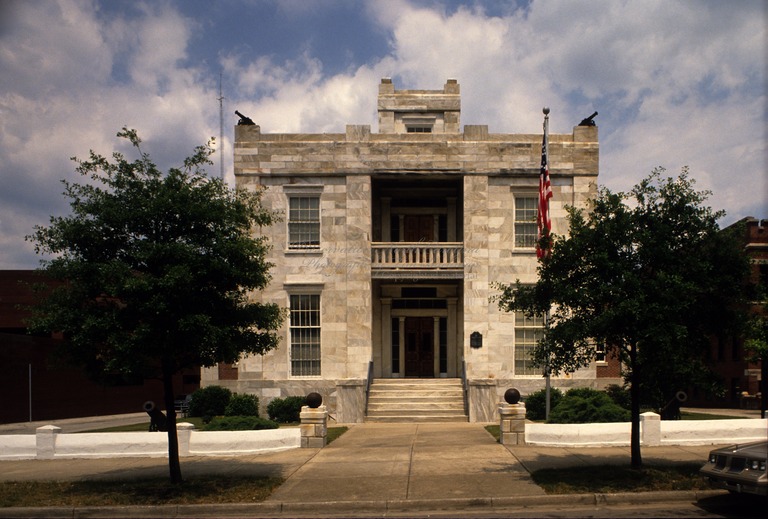 Benjamin Gardner (1792-1860), a builder active in antebellum Wilmington, built and may have designed key Greek Revival buildings including the city’s handsome market house. Part of a family established in the city, he appeared in the United States Census in Wilmington in 1820 and in subsequent censuses through 1850, when he was listed as a carpenter. The buildings cited to him are unusually sophisticated for antebellum Wilmington, raising unanswered questions about his design experience and influences.

Gardner’s early life and career are little known. He may be the “B. Gardner” who advertised as an artist in New Bern in 1826, Fayetteville in 1828, Charlotte in 1830, and Wilmington in 1833. By 1844 B. Gardner—probably but not necessarily the same man—was advertising in the Wilmington Chronicle his technique of installing tin roofs that would not be blown off easily (a useful feature in a region subject to hurricanes) and inviting the public to inspect his plan at the newspaper office. Benjamin Gardner went briefly to Savannah, Georgia, where in 1845 he built a large and elaborate jail. In 1847 he advertised in Wilmington that he had “resumed his profession in Wilmington” and was “prepared to take contracts for erecting or superintending buildings of any description.” In 1847 Gardner took on a major project, the construction of the Wilmington Market House—a remarkable and apparently unique building in its design and materials for its time and place. The open-air market, fashioned of cast and galvanized iron, was 187 feet long and occupied the center of the first block of Market Street. The Wilmington Commercial of February 29, 1848, which described the building in detail (see building entry), reported that “The contract was taken by Mr. Benj. Gardner of this place for $4,150; and the rapid and noiseless manner of its execution does much credit to the contractor.” No designer other than contractor Gardner was mentioned in city records or in any other known record.

In the following year Gardner provided the design and detailed specifications for the Wayne County Courthouse and Jail in the newly established county seat of Goldsboro. (Specifications survive in Wayne County Records, North Carolina State Archives.) Goldsboro, located on the Wilmington and Weldon Railroad at its junction with the North Carolina Railroad, had close economic ties with Wilmington. The construction contract for $17,800 was awarded to John E. Becton of Wayne County, with the stipulation that Gardner and Hillsborough builder John Berry would serve as arbiters in case of any disagreements between Becton and the building committee. Completed in 1850 and demolished in 1914, the Greek Revival style courthouse featured a portico with columns in antis, a brick cornice painted to imitate granite, and a square belfry housing a clock.

Long and credibly attributed to Gardner is another striking Greek Revival building, the John A. Taylor House (ca. 1846) on Market Street in Wilmington. A blocky and sophisticated design more akin to New York than Wilmington, it is a brick residence with a gleaming white marble front, a recessed entrance in antis, and a central belvedere. The interior features classical floral elements in the spirit of pattern books by Minard Lafever. In later years, the July 28, 1896, Wilmington Dispatch and other sources cited it as an outstanding antebellum residence and credited it to Benjamin Gardner.

There is speculation, but only that, as to whether architect John S. Norris of New York (or another architect) might have had a role in the design of the Taylor House or the Market House—both of which possess qualities of urbanity unusual in Wilmington or North Carolina for the period, suggestive of urban models as yet unidentified. Given the sophistication and quality of his known buildings, it seems likely that Gardner must have planned other notable buildings as well, but none has been identified. He died in 1860 and was buried in Oakdale Cemetery in Wilmington, as was his wife, Matilda Williford Gardner (1795-1870). Their children were Charlotte Perry, Mary Burch, Jane Durham, and Junius D. Gardner.