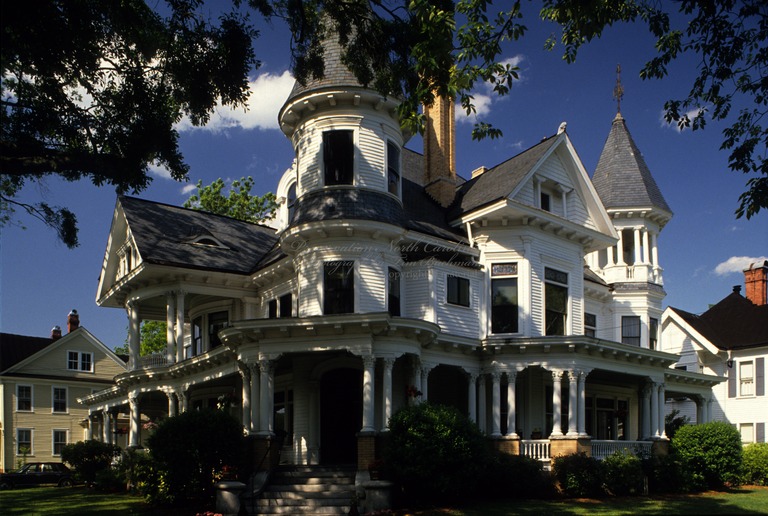 Herbert Woodley Simpson (January 19, 1870-October 21, 1945) was a New Bern-born architect who practiced extensively in that city and elsewhere in eastern North Carolina. From the 1890s through the 1920s, he designed most of New Bern’s principal edifices, and many others in the region. He was among the first generation of native-born, resident architects to practice in the state, and for many years he was one of the few architects in New Bern or eastern North Carolina outside of Wilmington.

Herbert Woodley Simpson was the son of John Archibald Simpson, a New Bern builder and undertaker, and Mary Higgins Simpson. No information has been found about Herbert’s early education, but he probably attended local schools. He apparently did not enroll in an academic architectural curriculum but followed a longstanding practice of studying with an established architect. In August 1888 he was accepted for a year of study with Baltimore architect W. Claude Frederick, with whom he studied from October 1888 to October 1889, and in March 1890 he received a recommendation from him.

Simpson soon returned to New Bern, where he probably assisted his father in his building business but began to establish himself as an architect. His first known project is the modest Queen Anne style John R.B. Carraway House (ca. 1890-1893), noted as Simpson’s design in the November 29, 1890, Manufacturers’ Record, confirming the family tradition of Simpson’s authorship. (This was the lifelong home of noted New Bern historian and advocate for Tryon Palace, Gertrude Carraway.) Simpson followed this with the Queen Anne style Christ Church Rectory (ca. 1893), and other similar residences. In 1896 he advertised in the local newspaper, “plans prepared at short notice.”

Fortunately for young Simpson, New Bern was undergoing a building boom spurred by the local timber industry and other manufacturing. Lumber magnates wanted to build the most impressive residences and commercial buildings money could buy, and as the principal resident architect, Simpson was well placed to plan them. He is credited with the design of almost every major structure built in New Bern in the first two decades of the 20th century. A versatile designer, he excelled in the Queen Anne and neoclassical revival styles, and often combined the two. He especially favored the Southern Colonial residential style with massive porticoes. He also employed the Romanesque and Gothic Revival styles for church designs. He displayed a penchant for dramatic forms both in overall massing of buildings and forceful details.

Four key religious buildings in New Bern demonstrate Simpson’s range. For one of the city’s largest congregations, he planned Centenary Methodist Church (1904) in collaboration with New York architect Charles Granville Jones, producing a massive tan brick edifice in eclectic Romanesque Revival style, with a complex form and roofline dramatizing the corner location. Like many other Protestant churches of the day, the church centers on a large auditorium with radiating pews. For St. Cyprian’s Episcopal Church (1910-1912), home of the city’s leading black Episcopal congregation, Simpson designed a strongly composed red brick building in Gothic Revival style with a massive tower and broad gables, likewise accentuating a corner site. Simpson also planned two smaller, temple-form houses of worship for the small First Church of Christ, Scientist (1907) and Temple Chester B’nai Sholem (1908), differentiating them with an Ionic portico for the Christian Science church and a Corinthian one for the Temple. Several miles away, in Greenville, Simpson planned Jarvis Memorial Methodist Church (1904-1907) in a towered, Romanesque style with auditorium plan akin to Centenary church. His principal civic building, the Carteret County Courthouse (1907) in Beaufort, displayed his favorite neoclassical mode with tall porticoes and a dome. Simpson also encompassed many other types of buildings. In New Bern he planned the Athens Theatre (1911), featuring two large arched openings and an ornate, curved façade parapet, and in Kinston and Rocky Mount he designed handsome corner banks with classical detailing. One of the most distinctive designs attributed to him—which is also credited to William P. Rose—is the Goldsboro City Hall (1902), a small but bold civic building featuring a portico, dome, and towering figures of Blind Justice and Liberty.

Simpson is probably best known for his Colonial Revival residences in New Bern and elsewhere. Among his early clients was the Blades family of the regional lumbering business. In the William B. Blades House (1903) he incorporated the neoclassical columns, pediments, and modillions of the Colonial Revival into a towered corner residence of Queen Anne massing. In this richly detailed home of a lumber baron, Simpson copied the Federal style motifs of New Bern’s early 19th century architecture in the interior woodwork, thus creating a local rendition of the Colonial Revival. Simpson’s most spectacular residence (now lost) was the James B. Blades House (1913), a granite and yellow brick mansion “of colonial style” and “one of the most imposing mansions in the state,” according to the New Bern Sun of May 2, 1913. It had a towering portico in Corinthian order, overlapping matching 1-story porches. In addition to new residences in this style, Simpson also accommodated clients who wanted substantial older houses remade in the new image. At the Coor-Bishop House, a fine 18th century Georgian dwelling, and at the J.A. Jones Residence (Hughes-Jones House), a striking antebellum residence of crenellated Gothic style, he transformed existing houses into columned Southern Colonial mansions. For William Blades’s daughter, Ivy Blades Robinson, who married another lumberman and settled in Elizabeth City, Simpson designed one of that city’s grandest residences, the Charles O. Robinson House (1913) in full-blown Southern Colonial style akin to the James B. Blades House. Simpson also planned more restrained versions of the Queen Anne-Colonial Revival style, such as the Walter Duffy House (ca. 1905) in New Bern, and he worked in other residential styles, such as the brick and shingled William Dunn House (1912) and others in New Bern.

Shortly after establishing his professional practice, Simpson married Nettie Tolson on April 21, 1897. They had two children, John Arch Simpson (January 14, 1898-January 1968) and Helen Elizabeth Simpson (February 22, 1890-May 1968). Simpson participated in the early development of the profession in North Carolina. He was one of the architects who met on September 16, 1913, in Greensboro, to form the North Carolina chapter of the American Institute of Architects (see Glenn Brown); there were five “institute members”—meaning members of the national AIA—and seven “chapter members,” including Simpson. He was also a member of the Methodist church and the Masonic order, and accomplished architectural projects for both groups in New Bern—a new church for the Methodists, and an enlargement and installation of a theater in St. John’s Masonic Lodge and Theatre. In addition to the projects included in the building list, Simpson probably designed many other buildings. A few are noted in the Manufacturers’ Record, such as a hotel for J. B. Blades (MR 10/18/1906) in New Bern; a hotel for the Beaufort Hotel Company (MR 8/27/1908) in Beaufort; and a hotel for Charles L. Abernathy (MR 8/5/1909) in Beaufort.

Simpson left New Bern in 1914 for Norfolk, Virginia, where he continued his practice until his death and still designed some buildings for North Carolina clients. In the 1920s, John Arch Simpson joined his father’s practice, which became Herbert W. Simpson and Son, and they worked together until the elder man’s death in 1945. Most of the buildings planned by the partnership were in the Norfolk area. Herbert Woodley Simpson was buried in Cedar Grove Cemetery in New Bern. A photographic portrait of him exists in the Herbert Woodley Simpson Collection, North Carolina State Archives. That collection also contains an extensive list of his works and drawings and other images of many of them.

Note: There are two principal collections of Simpson’s drawings and photographs of his projects. One is held by the New Bern Historical Society and has been posted on the website of the Kellenberger Room at the New Bern-Craven County Public Library. It may be viewed at http://newbern.cpclib.org/digital/nbhs/simpson/index.htm

Several projects are represented by either drawings or photographs (or both) in Simpson’s “Portfolio” and/or in the Herbert W. Simpson Collection at Archives and History for which information about location and status is incomplete. Some of these were built and destroyed and their locations are not ascertained. Some were probably not built. For others, their fate is still unlearned. If more information is located for these, they will be added to the building list. Beaufort County: Aurora, A. B. Styron House. Carteret County: Morehead City, J. B. Blades Summer House. Craven County: New Bern Graded School No. 3; E. H. Meadows House; W. A. Mitchell House. Edgecombe County: Battleboro, M. C. Braswell House. Halifax County: Scotland Neck, A. McDowell House. Lenoir County: Kinston, Henry Tull House; J. W. Braxton House, W. G. Jones House; and Lagrange, Lagrange Graded School.