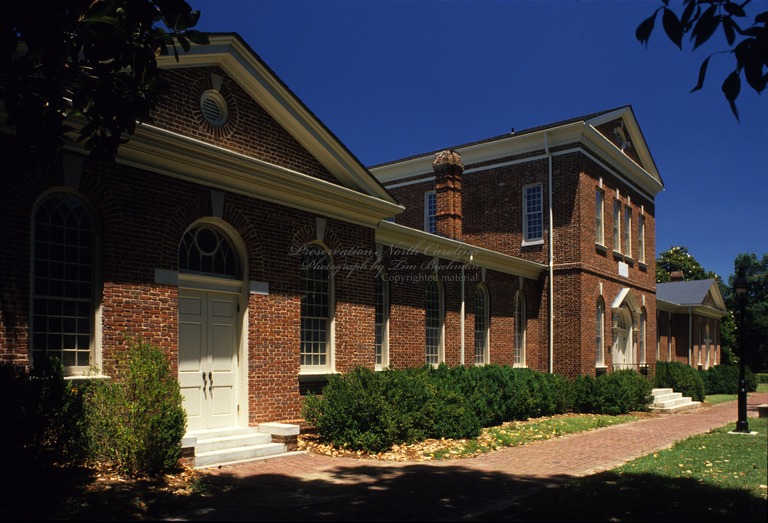 Leonard (Len) H. Royster (October 2, 1840-April 2, 1912) was a carpenter and builder who in 1878 formed with William J. Ellington (1849-1919) the Raleigh contracting and manufacturing firm of Ellington, Royster, and Company. Royster, a native of Raleigh, and Ellington, who came from Chatham County, created one of the city’s largest contracting and building supply businesses, in which Royster served primarily as the “architect” and superintendent of building from 1878 until the two parted ways in 1894.

Evidently the son of William H. Royster (1804-1845) and Mary H. Royster (1813-1880), Leonard H. Royster went to work at an early age probably because of his father’s premature death. In 1860 at age 17 he was working as a carpenter and living with his widowed mother, Mary Royster, then 46 and working as a seamstress, as well as David, 27, a tailor, and Burtus, also 17, a printer. (This family may have been related to other local Royster families, including David L. Royster, an older Raleigh house carpenter, who named his own son Vitruvius; and James Royster, father of at least seven children named for states of the union, and whose great-grandson Vermont Connecticut Royster became a prominent writer.)

By 1870, Leonard H. Royster, 28, was head of his own household, married to Elizabeth (Bettie) A. Frost and working as a carpenter in Raleigh. The couple had married on October 25, 1863. In 1880 he and Elizabeth were living with her parents and other family members. Evidently prospering as a builder, Leonard, known by this time mainly as Len, had joined forces in a partnership with a complementary entrepreneur. In 1878, he and William J. Ellington established the planing mill and contracting firm of Ellington, Royster, and Company. They advertised in the Raleigh Daily News on April 12, 1878, as the “successor firm” of Betts and Allen, manufacturing sash, doors, and blinds, moldings, brackets, balusters, newels, and many other building supplies needed for the highly decorative architecture of the era. Their shop was located near the Raleigh and Gaston Railroad, just west of that railroad’s shops. The firm also offered to provide plans and estimates for building. The next year, Hale’s Weekly carried a notice from Ellington and Royster on December 16, 1879, promoting their new machinery and emphasizing their capacity to “contract for houses on any of the railways,” employing twenty men in the field, in addition to twenty-four working in the shops.

In the operation of the firm, Royster was the “architect and supt. of buildings,” Ellington was the business manager, and Benjamin Park, a Confederate veteran originally from Virginia, was in charge of the shops. According to Raleigh historian Moses Amis, Benjamin F. Park, who had come to Raleigh in the 1860s “was a well-known contractor, and many handsome residences in the capital city bear testimony to his skill. . . . Associated with him in business at different periods were Messrs. Marshall and Anderson Betts and the late Len H. Royster, all of whom in their day were good citizens. Mr. Park was the father of Mr. Charles B. Park, instructor in the mechanical department of the A. & M.” Their association proved to be a successful one. Although their factory was “burned out” in 1879, 1881, and 1882, by the mid-1880s Ellington and Royster had become one of the largest manufacturers of sash, doors, blinds and scroll work in North Carolina. An account of 1885 stated that they employed fifty workers, and in addition to decorative woodwork, produced 20,000 shingles per day. Their factory included a 60-horsepower engine and boiler, a planing mill, and various tools, and a drying kiln in a separate building. A notice placed in the September 11, 1886, Manufacturers’ Record said they had the largest sash and blind company in the state, with the latest in equipment and as many as one hundred workers “when in full force.”

As Carl Lounsbury has explained, this was a period when sash and blind factories proliferated, and Ellington, Royster, and Company kept up with the times. In 1879, the new company was buying in one year alone nearly 1.5 million feet of yellow pine from the pine forests of Moore County. In 1882, as the News and Observer reported on August 2, the business manager traveled north to Baltimore, Philadelphia, and New York, to obtain the “most improved and fast working machines in the market.” The large brick shop with rammed earth floor, described in the same paper on July 27, measured 82 by 176 feet and held twenty-four planers. By 1883, the firm had contracted to build thirty buildings in Raleigh and supplied materials for twenty-one more, as well as shipping building materials by rail to Oxford, Henderson, and Durham, according to the Raleigh State Chronicle of January 12, 1884, and other publications touting local energy and accomplishments.

Although Royster supervised much of the construction work, in some cases the experienced builder Jacob S. Allen (ca. 1837-1909), a partner in the predecessor firm of Betts and Allen, superintended some projects for Ellington and Royster, notably the Pender County Courthouse and Jail in 1883. Allen subsequently opened his own practice in Wilmington, then returned to Raleigh.

Among the most prominent projects Ellington and Royster undertook were the Centennial Graded School in Raleigh (1885), designed by architect A. G. Bauer; the W.G. Upchurch Store in pressed brick and iron on Fayetteville Street in Raleigh (1886); and the Lea Laboratory Building (1887), designed in an unusually early Colonial Revival style by architect John Appleton Wilson, of Baltimore.

The firm also accomplished extensive residential work, of which only a few examples have been identified. On June 28, 1878, the Raleigh Daily News gave the new firm a boost in featuring the new residence of W. C. Parker, “completed yesterday, which is pronounced by the owner to be the finest and best piece of work for the money, ever erected in the city. It was built by Ellington, Royster, and Co., builders and contractors.” The next year, on April 23, 1879, Ellington and Royster contracted to build a large and elaborately finished residence for Charles Upchurch, evidently at the northwest corner of Fayetteville and Lenoir Streets. A long and detailed set of written specifications makes reference to both an “architect” (unnamed) and many drawings. The house was to have a mansard roof, a tower, a balcony, iron cresting, and bay windows, among other features. In 1887, a booster publication called City of Raleigh cited Upchurch’s “elegant” residence as a specimen of the firm’s work along with the R. T. Gray residence, additions to the local Yarborough House hotel, and the stores of Julius Lewis, Norris and Carter, and other works.

In 1894 Ellington and Royster went their separate ways. Ellington joined William J. Hicks in the North Carolina Building and Supply Company. Royster established a partnership with Benjamin F. Park in 1895, advertised as the successor firm to Ellington and Royster, in which Royster was “architect” and superintendent of buildings and Park had charge of the manufacturing shops. They promised to build “anywhere in the state.” This firm was short-lived, however, and Royster soon joined one E. Moser in a new partnership, and they built the Fountain Cotton Mill in Tarboro in 1899. Royster spent the rest of his life in Raleigh and died there on April 2, 1912. He was buried in Raleigh’s City Cemetery, as was his widow Bettie in 1921, and as had been his parents Mary and William.