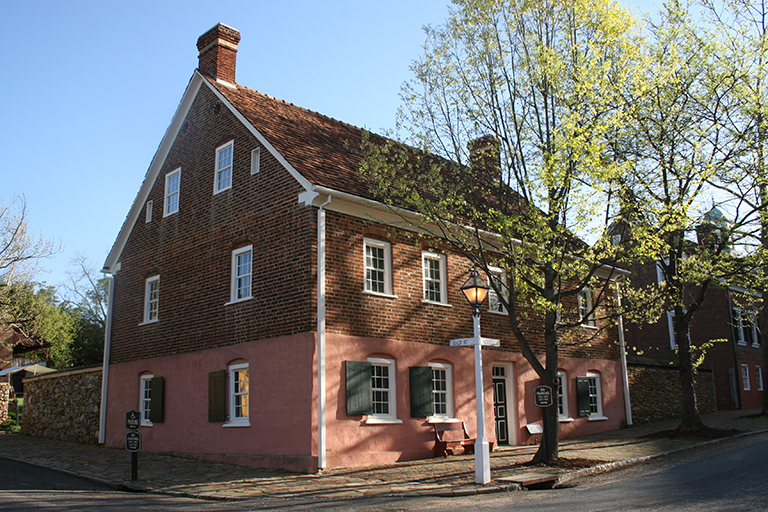 William Craig (fl. 1790s), a brickmason who worked in Salem, North Carolina, was an “outside mason” or “stranger”—i.e. not a Moravian—whose skills had a lasting impact on the brick architecture of the community. He worked closely with master mason Johann Gottlob Krause and apparently introduced patterned brickwork into Salem. Although he was highly skilled, nothing is known of Craig’s background; probably because he was not a Moravian, the Moravian Records give little information about him, his origins, or his family. He took an important role in constructing Salem’s fine brick buildings of the Federal period.

The first record of William Craig in Salem appears on April 24, 1794 when the Aufseher Collegium minutes noted, “we have heard that Gottlob Krause has accepted William Craig for mason work at the new school house construction.” According to the minutes, the acceptance of Craig as an apprentice or employee met with disapproval from the community, and Krause was urged to reconsider. But on May 6, 1794 the minutes noted that the community grudgingly accepted the appointment and moved on with the building of the “schoolhouse.” As noted in the entry on Krause, in this period Salem was frequently faced with a lack of good brickmasons.

This schoolhouse—the Boys School, which still stands—displays a different manner of laying brick from that employed in Salem previously, with glazed headers forming decorative patterns, here lozenge designs. It is believed that Craig employed this method based on his experiences elsewhere, and that Krause learned the technique from him. Such work was often seen in English settled areas such as New Jersey and northeastern North Carolina, but it had not appeared in Salem before. It became widely used in the western Piedmont of North Carolina for German families as well as English ones. Craig also employed a more standard and efficient way of laying brick than the method Krause had employed, which had shared much with the potter’s trade (see Krause entry). Like many brickmasons, Craig also undertook work in whitewashing and plastering. He was recorded as whitewashing the rooms of Brother Marshall in 1795, and in 1796 he was employed to plaster the house of “Sister Transou” by prominent community member Christoph Vogler.

Craig’s most substantial project in Salem was construction of the Vorsteher’s House of 1797, the residence of the church’s administrator. He was given this task in its entirety, from laying the foundation to raising the roof. Town leaders found his work to be too costly and demanded lower pay for workers. The two parties eventually came to an agreement and the building commenced. It is a 3-story brick building set into the hill adjoining Main Street and follows a central passage plan.

Also of major importance, Craig was employed in 1798 in working on the foundations and walls of the imposing, Flemish bond Home Moravian Church (Aufseher Collegium minutes, May 22, 1798). The mason’s work was noted as being particularly difficult as the slope of the building site was steep, and the basement rooms required special attention to their construction for the kitchens were downstairs. Craig was also mentioned as “drawing up the walls” for the church with Krause and other workers; the task required more than 300,000 bricks with some of the work was as high as thirty feet in the air. Later in 1798 Craig fitted the stone plates for stairs, windows, door sills, and accomplished other tasks in completing the church.

Shortly after working on the church, Craig left Salem. It seems that problems with the wages he requested came to a head and he was asked to leave the community. The United States Census of 1820 lists a William Craig—possibly the same man—living with his family in Salisbury, North Carolina, but otherwise his whereabouts are not known. Nor is it known whether he was involved in any of the decorative brickwork on the various other brick houses and chimneys in the western Piedmont.