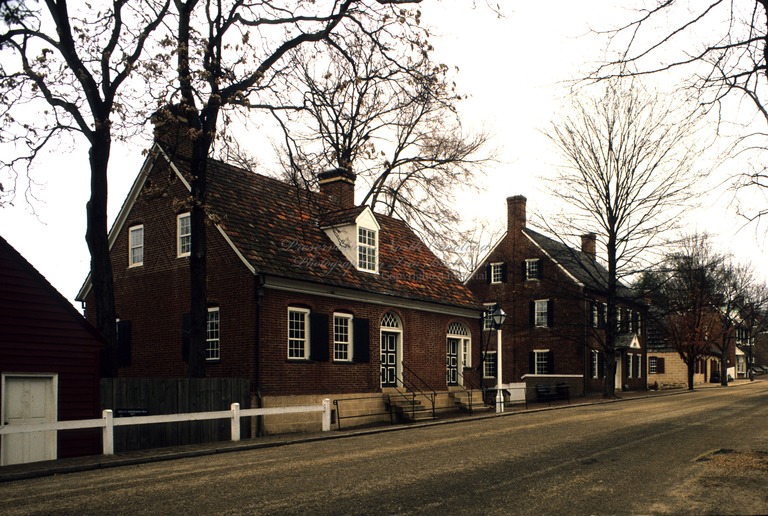 Johann Gottlob Krause (September 18, 1760-November 4, 1802) was the master mason during the construction of the first major brick buildings in the Moravian community of Salem (in present Winston-Salem). Representing the first generation of native North Carolina Moravian artisans, in the post-Revolutionary era Krause introduced construction techniques that blended Germanic forms with decorative brickwork adapted from English traditions, and thus shaped the architectural character of this unique community.

Krause was born in 1760 in Bethabara, a frontier village settled in the 1750s in North Carolina’s Wachovia Tract by Moravian pioneers sent from Bethlehem, Pennsylvania. He was orphaned by the age of two. In 1771, Salem’s master potter, Gottfried Aust, adopted him. Thus began a complex and often stormy relationship between two renowned citizens and craftsmen of the Wachovia settlement. Krause ran away from Aust in 1773 but became the potter’s apprentice in 1774. Ultimately, so many disputes arose between the two that the town council removed Krause from the Aust household and provided him room and board in the Single Brothers House; from there Krause was escorted to and from his work at Aust’s pottery. Their problems continued to fester throughout the apprenticeship, which lasted until 1781.

On March 20, 1781, to help solve the chronic shortage of masons in Salem, Krause was released six months early from his apprenticeship at the pottery so he could learn the mason’s trade from Brother Melchior Rasp. Rasp, born in Salzburg, Austria, and trained as a stonemason in Frankfurt, brought an essential Old World skill when he arrived in 1755 as one of the earliest builders in Wachovia. When Rasp received Krause as an apprentice, however, he was 67 years old, blind in one eye and suffering from a variety of illnesses. In October, 1782, after an 18-month apprenticeship, Krause was designated a journeyman working with the master, Rasp. On March 19, 1785, Rasp died, leaving Krause on his own with four years of training as a mason.

Salem, like other communities after the American Revolution, engaged in a major building campaign. The first generations of buildings in Salem and Bethabara, constructed in the 1750s and 1760s by such Old World artisans as Melchior Rasp, incorporated Germanic traditions adapted to the local setting and relied chiefly on stonework, half-timber (Fachwerk), and log construction. In the postwar era, the community turned to brick construction for major buildings, with Krause the leading mason.

In 1783, Krause began operating the Salem brickyard to make bricks for the proposed Single Sisters House, but after Salem’s tavern burned on January 30, 1784, the community council decided to use the bricks intended for the Single Sisters House to replace the tavern instead. The Moravian preference for using congregational members whenever possible for their construction projects limited their options when it came time to rebuild the tavern. Although Krause had been trained as a stonemason, an agreement was negotiated for him to construct, as well as supply bricks, roofing tiles, and pavers for the Salem Tavern (1784)—the first 2-story, all-brick building in Salem.

Masonry work on the tavern commenced June 16, 1784 and was completed December 11 of that year. Its masonry details are particularly revealing, for in its construction, Krause displayed his training as both a potter and a stonemason. His brick are oversized—-measuring 12 inches long, 5½ inches wide, and 3 inches high—and thus require two hands (rather than the usual single hand) to set in place. In this sense, Krause’s bricks function more as clay stones. Moreover, instead of using a single standard-sized brick and breaking some of them to form the closers required to even out a course of brick, Krause—the potter—molded different sized bricks to meet specific needs. Even a filler brick, a unit smaller than a queen closer, was individually molded. At the floor levels, instead of reducing the wall thickness by one brick course, as was normal practice for brickmasons, he used a smaller header brick to reduce the wall’s dimension. In these and other telling details, the tavern displays a craftsman working his way through a series of technical problems during construction.

Four days after the tavern was completed, the community council declared Krause a master mason. He was 24 years old. The following year, he completed the Gottlieb Shober House (1785) for a lawyer, entrepreneur and later postmaster of Salem. The same year and across the street from Shober’s house he constructed the long-awaited Single Sisters House (1785). In 1786, he doubled the size of the 1769 Single Brothers House with a large southern addition. In all of these projects, Krause employed the same construction detailing and the use of the oversized brick and other unusual techniques he first used at the tavern.

Krause was valuable to the community because of his unique technical skills, which evidently offset his frequently troubled relationships with the congregation. Problems included his purchase of a slave, horse trading, high prices for his work, and the brandy ration he gave his brickyard workers. A conflict between Krause and Gottlieb Shober during construction of the latter’s house even came to blows.

When the post-war building boom slowed in 1786, Krause planned to return to Bethabara and the pottery trade, but the council dissuaded him. He married Maria Meyer in 1786, bought a house, and soon took on various jobs including the position as road master, breaking stones for walls, and making smoking pipes of pottery. In 1787, he asked that the position of master mason be given over to Abraham Loesch, but by April of the following year the council noted, “concerning the bad mason work that is done at times it was suggested to have Gottlob Krause employed as the master mason.” Trouble with congregational rules, however, continued to mar Krause’s reputation. Finally, after unsubstantiated accusations of taking meat from the tavern smokehouse, Krause chose to leave Salem. In January 1789, he bought the Bethabara pottery, where he lived for the remainder of his life.

Krause’s importance in Salem’s architecture had just begun, however. By September 12, 1793, he was back in Salem to “take over the building of the new schoolhouse”—the Boys School (1794) and to furnish the brick and roof tile for it. In this 2-story brick structure, perhaps influenced by the “stranger” (non-Moravian) workman William Craig, Krause introduced into Salem decorative brickwork in which the pattern of Flemish bond brickwork with glazed headers was manipulated to form lozenges, herringbone, and even letters. This was part of a surge of such expert brickwork in the western Piedmont that blossomed in the last decades of the 18th century and the first few years of the 19th century. Such motifs were based in English, not German, craft traditions. Moreover in these decorated gables, as at the Boys School, Krause abandoned his oversized brick. Evidently in this project he had learned more than one new technique of the bricklaying trade, perhaps from Craig.

Krause’s next big project took the art of masonry a step further. In the brick Christoph Vogler House and Workshop (1797), which he built for gunsmith Vogler, he relegated the oversized brick to interior walls, while for the exterior walls he employed a molded brick water table, and elaborate use of glazed headers in a chevron pattern at the gable end, plus initials worked into the brick walls—all expert brickmasonry techniques that contrasted with his earlier work. The “W” for Vogler on the front wall and his own “IGK” on the gable end reflected the Germanic pronunciation and 18th century script worked into the brick pattern—again, techniques based in English and mid-Atlantic traditions applied within a German community.

When the Salem community began construction of its large and elegant brick church, Home Moravian Church (1800) planned by the town’s administrator Frederic William Marshall, Krause started producing its roofing tiles in 1798. By 1799 he was both supervising and personally undertaking the masonry work. In the church, the masonry unit was standardized and the techniques were typical of a standard brick mason’s techniques; with Flemish bond brickwork, water table and belt course. Little evidence remained of Kraus’s earlier techniques. In its scale this was the largest building in Salem up to the 1830s.

Krause built two other large brick buildings in Salem. The Winkler Bakery, like Home Church, was begun in 1799. It reflects Krause’s full assimilation into the mainstream of 19th century masonry and building design with a standardized brick and an increased attention to symmetry. The residence of the Salem physician, the Dr. Samuel Vierling House (1802),was the largest private house built in Salem at the time. It mimics the design set by church in many details, most specifically the use of paint to simulate a more formal rubbed brick at the corners, window and doorjambs. (Some evidence exists that Krause may have also used paint on some of his earlier buildings.) In the gables, however, Krause retained the use of dark headers to form a series of chevrons. The house was completed in June 1802. By the following September, Krause had prepared his will and sold the pottery. He died the morning of November 4, at the age of only 42, leaving a legacy of substantial, handsome, and uniquely crafted brick architecture that redefined the townscape of Salem.