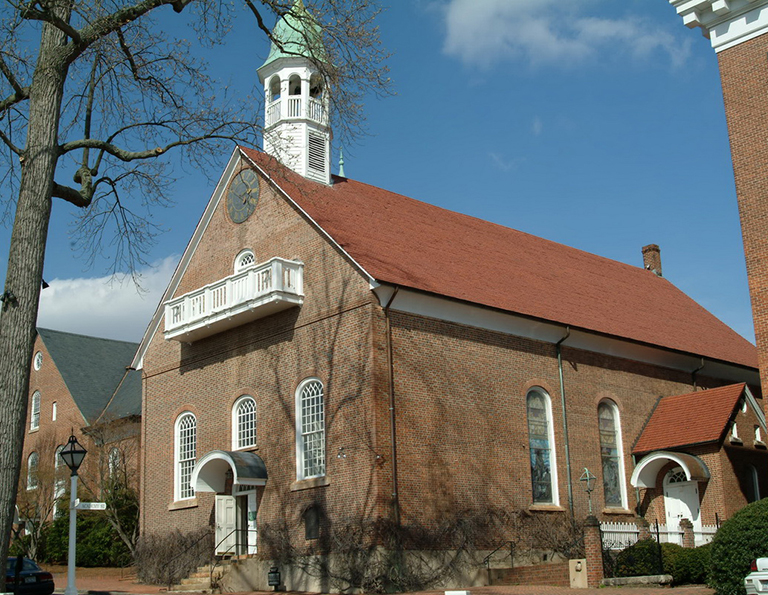 Frederic William Marshall (February 5, 1721-February, 1802), Oeconomus of the Wachau, meaning chief administrator of the Wachovia settlements in North Carolina, served not only in governance but also essentially as a planner and architect for the Moravian settlements in and around present Winston-Salem, with his best-known and culminating building Salem’s Home Moravian Church.

Marshall was born in Stolpen, Upper Lusatia, Germany in 1721, the son of army officer George Rudolph von Marschall. He attended universities in Leipzig as well as Herrnhaag, a Moravian community. He was raised in a military household that anticipated he would become a military officer, but he decided against a military career after joining the Moravians or Unity of Brethren in 1739 at age eighteen.

This group, known as the Moravians for their origins in Moravia and Bohemia, is a Protestant denomination that traces its origins to the 15th century martyr John Hus. After centuries of persecution, in the early 18th century the Moravians were able to find a sponsor and home in Herrnhut, Germany on the estate of Count Nicholas von Zinzendorf. Marshall, who was fluent in both English and German, rose quickly to positions of trust as an associate of Zinzendorf and his son Christian Renatus. At this time the Moravians, under Zinzendorf’s leadership, were expanding their activities outward from their home base in central Europe, especially through mission work, and into other hemispheres where they hoped to establish settlements where they could worship freely; follow their communal, pacifist, and religion-centered way of life undisturbed; and carry the gospel to potential converts. In 1753 the Moravians acquired a 98,985-acre tract in present Forsyth County, North Carolina, which they called Wachau or “Wachovia” after its resemblance to the Wachau valley in Austria, ancestral home of Moravian leader Zinzendorf. Beginning in 1753, Moravian leaders sent settlers to Wachovia from their previously established base in Bethlehem, Pennsylvania, as well as others from Europe to develop the community in Wachovia. The first villages were Bethabara and Bethania, founded in 1753 and 1759, respectively. In the 1760s plans were formulated to establish the town of Salem as the trade and administrative center.

In 1761 Marshall was made Senior Civilis, a Moravian minister ranking as a bishop, and in 1763 he was charged with oversight of the material interests of the Moravians’ Wachovia tract in North Carolina with special attention to creation of the town of Salem. (The town of Bethabara had already been established in 1753; Salem was to be the administrative center of several towns planned for Wachovia.) He arrived in Bethabara in 1764. For the next forty years Marshall served as administrative head of the Moravians in North Carolina, and in that position he exerted a profound influence on all aspects of the development of the area including Salem’s location, town plan, and architectural development. Marshall’s mission was stated succinctly when he made his first visit to Wachovia in 1764 and “took this occasion to announce that a founding of a new town in Wachovia was the chief object of his visit.” The next months were spent inspecting various sites until the choice was made on February 14, 1765. With that initial step personally supervised and completed, Marshall returned the next week to Pennsylvania and then to Europe, leaving one Johannes Ettwein in charge of preparing to develop the new town, with construction starting in January of 1766.

Although he was absent for the next three years, Marshall clearly articulated his vision of the town in his correspondence and directions to Ettwein. In a July, 1765 letter sent from Bethlehem, Marshall covered the spectrum from the broadest philosophical purpose of the town down to its smallest details. He explained that “This town is not designed for farmers but for those with trades.” The purpose of Salem, he wrote, was to be “more like a family where the religious and material condition of each person is known in detail, where each person receives the appropriate choir oversight, and also assistance in consecrating the daily life. This must be considered in deciding the form of the town plan.” (Choirs, for the Moravians, were groupings by gender, age, and marital status, which assisted in guiding and supporting their members; they included the Single Brothers, Married Brothers, Single Sisters, Married Sisters, Little Boys, Little Girls, etc.) Marshall stated that multi-storied apartment houses were “disadvantageous for all and especially for children,” and the risk of fire would be reduced by building with low density. Each house lot was to have a side drive, garden space in the rear, and a yard space for children.

For Salem, Marshall drew extensively from the example of Lititz, Pennsylvania, developed by Moravian surveyor Christian Gottlob Reuter, which had a standard lot size of 66 by 200 feet and street widths of 60 feet for the main street and 40 feet for others, all arranged on a grid pattern. Around a central square he proposed the major congregational buildings. With an eye for the overall appearance of the town, he suggested that “to keep the plan symmetrical the store might be placed on the lower corner [of the square] since it is larger than a family house.” (See William J. Murtagh, Moravian Architecture and Town Planning [1967], for a copy of Marshall’s plan of 1766.) Construction began in Salem in 1766, with brethren from Bethabara and Bethania as well as workmen from elsewhere, and initial buildings were completed over the next few years. Not until 1772 did the administration move from Bethabara to the new town and begin a new life there.

In February, 1768, Marshall returned to personally “undertake to have houses built for the Single Brethren and for the Single Sisters in Salem as soon as possible . . . and arrange all things in Salem according to the custom of our Congregation and Choirs in Europe.” After a reevaluation of the locale’s water sources, topography, and fall lines, one of Marshall’s first actions was to recommend “that the Square be moved seven lots further south.”

It is difficult to define Marshall’s precise role in the actual design and construction processes in relation to the various master craftsmen in Salem. Congregation records noted that on December 1, 1768, “The site of the Tavern was selected by Marshall and others.” Based on the concept of congregational consensus, it is likely that extensive consultation occurred on all major town projects. Marshall presided over these discussions and was unquestionably influential. Possessing both drafting and designing skills, Marshall took essentially the role of architect for several buildings, as illustrated by his drawings for the Community Store (attributed), Vorsteher House, Single Brothers House, and Home Moravian Church, among others.

During the years before the American Revolution, major construction projects in Salem included the Single Brothers House, the Single Brothers Workshop, the Community Store, and the Gemeinhaus. It is likely that Marshall worked with the artisans involved, such as stonemason Melchior Rasp, to develop and refine the design and to supply needed drawings as the work proceeded.

Marshall left Salem again in February, 1775 to attend the Unity’s Synod meeting in Europe and did not return until 1779. During the American Revolution, however, there was little construction attempted in Wachovia because the Moravians, who were pacifists, devoted most of their energy coping with the war and seeking to retain their land rights.

In 1780 Marshall designed a new Bell Tower, which originally sat on Salem Square and later was moved to stand beside the Gemeinhaus (Salem). In 1783 Marshall went to the nearby town of Friedberg to aid in designing their church. He also spearheaded the formation of a construction committee including Brothers Praetzel, Stotz, Herbst, and Johann Gottlob Krause to determine the final location for the church in Salem. He served as a member of the 1783 committee to supervise construction of the proposed Single Sisters House. When the 1771 Salem Tavern burned in January, 1784, Marshall shifted attention to rebuilding the tavern, and drew plans for the new Salem Tavern II as the first all-brick building in Salem. In 1788 he presented the plan for a new Bethabara Church and Gemeinhaus in Bethabara.

Aware that Salem was on the verge of a postwar building surge, in June, 1788 Marshall prepared a set of Building Rules which were enacted on June 22. More than any other document it showed Marshall’s concern for community planning as integrated with both spiritual and secular well-being. The document covers all aspects of the built environment and shows Marshall’s deep understanding of architecture, building trades, and town planning.

In 1793, at age 73 and plagued with gout and deafness, Marshall remained active and continued to shape the architecture of Salem. In 1794 he supervised design of the Boys School. In April, 1797 Marshall undertook his crowning architectural achievement, Home Moravian Church. The imposing brick building combines fine Flemish bond brickwork and a traditional Moravian plastered cornice with tall, arched windows and other motifs reflective of the nationally and internationally prevalent taste for neoclassicism. In this building, Marshall introduced an apparently original entrance treatment, with an arched hood that became a distinctive and lasting feature of Salem architecture and was revived in the early 20th century as part of a local Moravian or Salem Revival style (see Northup and O’Brien).

In 1800, as a fitting conclusion to a life dedicated to the congregational system and its architectural character, Marshall had the satisfaction of seeing Home Church, his last and most important building, completed on the Square. He died two years later at Salem’s height as a congregation town.