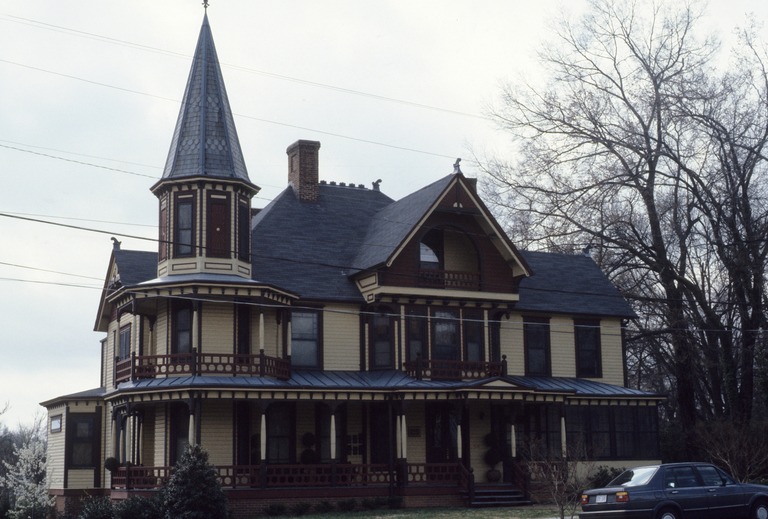 George C. Bonniwell (1837-1912), a highly mobile manufacturer, builder, and architect, was a native of New York who moved to the western Piedmont of North Carolina in the late 1870s. He and his daughters Josephine and Norma constituted an unusual family in North Carolina building practice—as “Bonniwell and Daughter” for a time. His daughter Norma N. Bonniwell was especially active, working under her own name as “architect” from a young age, and planning substantial buildings in a several-county area in the western Piedmont and foothills.

Born in Williamsburg, Long Island, George was the first child of James Bonniwell, a wheelwright from England, and Phoebe Capes, who married in 1836. In 1839, the family and other Bonniwells moved to Mequon, Wisconsin as pioneers, where James and Phoebe had seven more children. In 1850 James and his brothers joined the California gold rush, but later he returned to Wisconsin. George’s early life and training are not known, but he is believed to have been involved in planning and constructing buildings for the 1876 United States Centennial Exposition in Philadelphia before arriving in North Carolina about 1877.

By 1880 Bonniwell was living in Lovelady, Caldwell County, North Carolina, a community near Hickory. He was listed as a millwright and head of a household that included his second wife Catherine (Kate) Snedeker and four children. The elder children, William (aged 17) and Ada (aged 14) were born in New York, while the two youngest daughters Norma N. (aged 3) and Josephine (aged 1) were born in North Carolina.

In 1877 George C. Bonniwell had established the Hickory Hub and Wheel Works with Andrew L. Ramseur, who had an iron forge, gristmill, and sawmill on the Catawba River. The partners soon began manufacturing wagons and moved their business to the Western North Carolina Railroad town of Hickory where they established the Piedmont Wagon Factory. Ramseur went back to his saw mill, and in 1882 Bonniwell changed the name to the Piedmont Wagon Company, which became one of Hickory’s leading industries. Bonniwell became known as Hickory’s “Father of Industry.” In 1881 he began the Hickory Co-Operative Association (later the Hickory Manufacturing Company) which produced sash, blinds, doors, trim, and other building materials, and soon went into construction. The State Chronicle of October 11, 1884, reported that he was the superintendent and “architect” of this company, which did all kinds of building work.

According to a notice in the Raleigh News and Observer of August 24, 1899, by that time Bonniwell’s extensive construction work included the Black Mountain Hotel, the Hickory Inn, the Waynesville Courthouse, Claremont College, the J.H. Pearson House and an Episcopal Church in Morganton, the Methodist Episcopal Church in Hickory, and the Lowenstein House in Statesville, along with many other buildings. A few of these have been further identified (see building list).

By 1899 George Bonniwell was in Raleigh and associated with builder John W. Coffey (see Coffey Family). The announcement of their partnership described Bonniwell as a native of New York and a “graduate in architecture of Cooper Institute of New York.” Family tradition suggests that Bonniwell had a role in designing or building the neoclassical Olivia Raney Library in Raleigh (1899-1900), but this is undocumented. The firm of “Bonniwell and Coffy, Building Contractors” advertised in architect William P. Rose’s booklet, That House of 1900. Bonniwell’s Raleigh stay was brief, however, for in 1900, the United States Census found him and his family (Kate, Georgina, and James G.[Gaither]) back in Hickory. According to the Coffey family, George Bonniwell left for Texas about 1900 but moved to Florida before 1910. In the 1910 census he was listed as an architect in Hillsboro County, Florida, living with Kate and their daughter, Georgina, 25, a schoolteacher. According to From Tavern to Town, he died in St. Petersburg, Florida and was buried in Oakwood Cemetery in Hickory.

Although their practices were brief, with the encouragement of their father, Norma and Josephine Bonniwell were among the first North Carolina women to pursue the profession of architect. Norma N. Bonniwell was identified as an architect for several building in the 1890s and worked briefly in Raleigh in an architectural office along with her sister. After she married William Peele King in 1901, she discontinued the profession. In 1903 Josephine married Eubert Lyerly, a prominent businessman who ran a hosiery mill in Hickory and had a family. She lived in Hickory the rest of her long life, leaving descendants in the community. According to Josephine’s descendants, the Craftsman style Lyerly House (1912) in Hickory was designed by George C. Bonniwell and his son, James Gaither, and built for Josephine and Eubert Lyerly. Josephine is credited with painting the Craftsman style decoration of the interior.