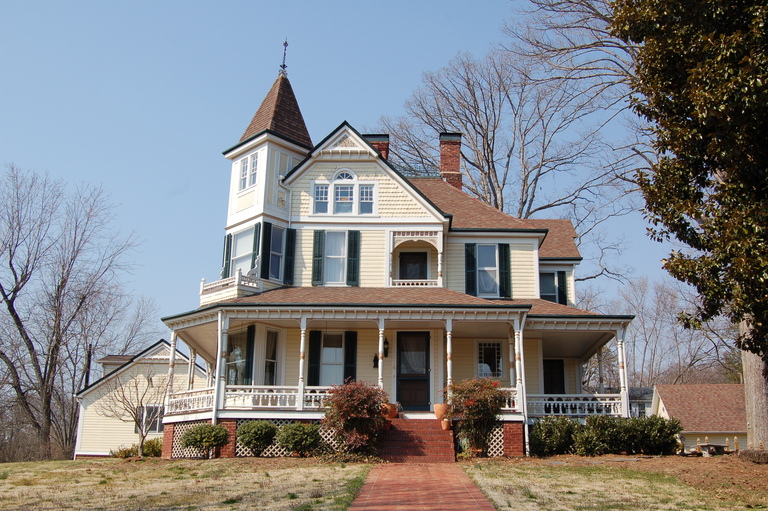 Norma N.Bonniwell (1877-1961) or Norma Bonniwell King, her married name, was among the very few women in 19th century or early 20th century North Carolina identified as an architect. She was the daughter of George C.Bonniwell, a manufacturer, builder, and architect who trained three of his children—Norma, Josephine, and James Gaither—in his business. Norma was identified as an architect from a remarkably young age. Although she evidently worked with her father in Bonniwell and Daughter, Norma had her own identity as an “architect” and had clients in several towns in the western Piedmont and foothills. The first such reference appears in the March 19, 1892, Manufacturers’ Record, which reported that “Miss Norma Bonniwell has prepared plans for the erection of $25,000 building at Lenoir College” in Hickory. In 1893 she designed an elaborate Queen Anne style residence in North Wilkesboro, the Thomas B. Finley House, for which the client’s family recalls signed plans.

A few years later, The Landmark in Statesville noted on February 23, 1897, “Miss Norma Bonniwell, an architect of Hickory, was in town last week looking after the matter of drawing plans for residences for Messrs. R. L. Poston, C. W. Boshamer and W. A. Thomas. She is now preparing plans for Mr. Poston’s house, which is to be built on Mulberry street, next Mr. Geo. H. Brown’s.” A few of these houses have been identified. The W. A. Thomas House, as it turned out, was actually designed by Asheville architect Arthur J. Wills. A Poston house (no longer standing) of Gothic Revival style was located at 123 S. Mulberry Street in Statesville. She may also have done other work in the Hickory area.

Norma Bonniwell and her sister Josephine evidently moved to Raleigh about 1899, as did their father, George. They were both listed in 1900 as boarders living at the White residence in Raleigh, both working in an “architect office.” The architecture firm of Pearson and Ashe hired Norma as a draftsman in 1899, and it is likely that Josephine worked at the firm with her sister. On November 20, 1901, Norma Bonniwell married William Peele King, and they settled in Windsor, North Carolina. She evidently did not return to her architectural practice.