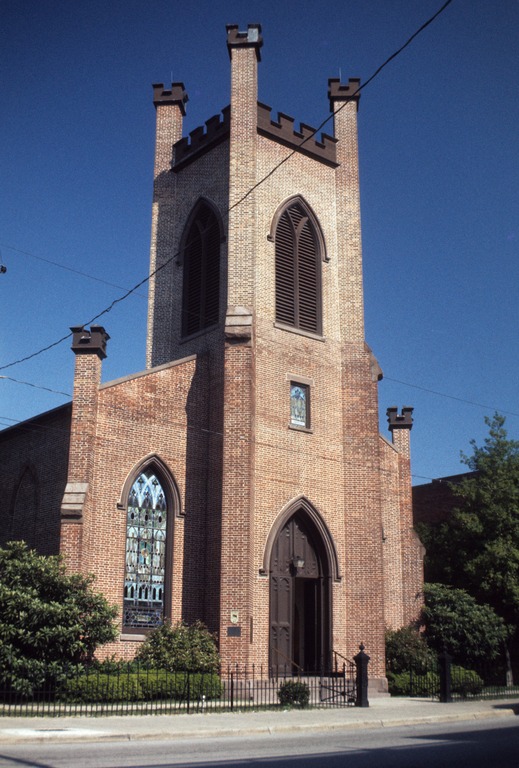 T. Thomas and Son (fl. 1840s), consisting of Thomas Thomas and his son Griffith, was a New York architectural firm that planned several buildings in the antebellum South. The firm’s only known project in North Carolina is the First Baptist Church in New Bern (1848), one of the earliest non-Episcopalian Gothic Revival churches in the state.

As Peter Sandbeck relates in The Historic Architecture of New Bern and Craven County, North Carolina, New Bern Baptists were meeting by 1740; they organized a congregation in 1809; and they built a plain meeting house by 1812. As the congregation prospered and grew, its members decided to build a new church. According to New Bern and church memoirist John D. Whitford, they looked northward for a suitable architect and selected the firm of T. Thomas and Son of New York. Thomas Thomas, a founder of the American Association of Architects in 1837, is best known as the designer of the Italian palazzo style Hay House in Macon, Georgia in the 1850s.

Although some early 19th century Episcopal congregations in North Carolina—including Christ Church in New Bern—built churches in the Gothic Revival style, few other Protestant denominations used that mode—which was often associated with Catholicism—before the 1850s. (See William Percival, First Baptist Church, Raleigh). The brick church, rendered in the Flemish bond brickwork favored in New Bern, was one of the first major buildings erected in its community after a downturn in the local economy. It is not known which of the city’s brick masons did the brickwork, but records indicate that the bricks were fired at the kiln of Col H. J. B. Clark, and New Bern’s leading antebellum carpenter, Hardy B. Lane, Sr. executed the carpentry work.