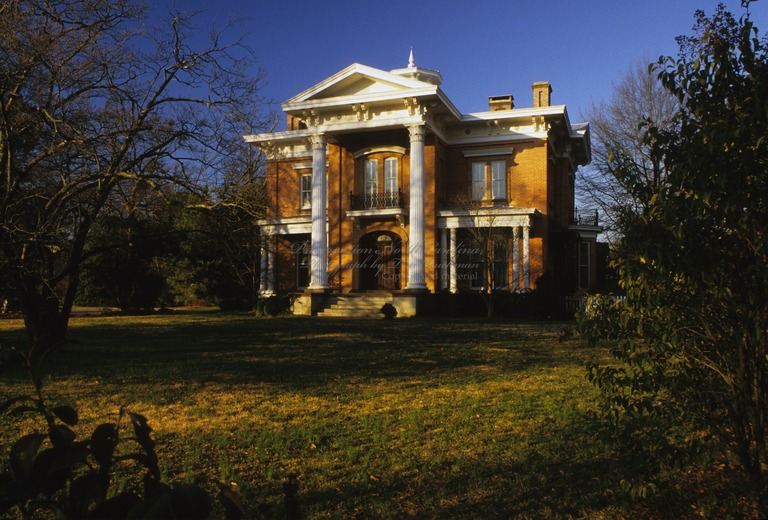 William Percival (fl. 1850s), architect, was a colorful and enigmatic figure who designed several boldly stylish and dramatic edifices during his brief tenure in North Carolina in the late 1850s. After coming from Richmond to Raleigh in 1857, Percival created a legacy of work that encompassed the Italianate and Gothic Revival styles and included villas, college buildings, churches, and a courthouse, and gained him widespread attention before he left the state in 1860. Despite his fame at the time and his penchant for self-promotion through competitions and newspaper articles, his life story is almost unknown: nothing is known of his parentage, training, or subsequent career, or even his birth and death dates.

In the early to mid-1850s, William Percival was working as an architect and engineer in Virginia. He advertised in the Richmond Enquirer of October 12, 1855, as a civil engineer and architect who could survey for railroads and plank roads and design private and public buildings; the references he gave indicated he was involved in surveying projects in southern Virginia in 1853 and 1854. According to Kemp Battle’s history of the University of North Carolina, Percival was a retired officer from the British army; there was indeed a William Percival who served as captain in the 9th (East Norfolk) Regiment of Foot in the early 19th century, but there is no documented link between the two men.

In 1855, William Percival won a prize for architectural drawing in the annual fair of the Virginia Mechanics Institute. He soon opened a drafting room in Richmond, and when the Virginia Mechanics Institute established a school to teach drafting and design, Percival was employed as the principal. He lectured on the history of design, and with his assistant, John Grant, instructed more than thirty students as draftsmen. On May 23, 1857, Percival and Grant announced in the Richmond Daily Dispatch their partnership as “Architects and Civil Engineers” with “professional training and combined practical experience of more than 30 years” that enabled them to design all kinds of buildings and to supply “working drawings, specifications, and superintendence.” They had on hand “complete sets of plans for churches, villas, farm cottages, bridges &c.” The partners soon gained a commission that took Percival to North Carolina: the First Baptist Church in Raleigh.

The First Baptist Church was an important commission, a large Gothic Revival edifice at the center of the capital. The stuccoed brick building measured 80 by 48 feet plus side wings, was trimmed in sandstone, and featured a central entrance tower rising to a spire 160 feet above the ground—the tallest spike in the city’s skyline at the time. Contractor Thomas H. Coates of Petersburg began construction in the fall of 1857, and the church was occupied in 1859. With the church underway, Percival attracted so much work in North Carolina that by January, 1858, he and Grant opened an office in Raleigh. By May, 1858, the partners had separated, and Percival advertised offices in both Raleigh and Richmond.

In the Raleigh Register of August 28, 1858, Percival advertised that he had sixteen years of experience in public and private work in Europe, Canada, and the United States. He reeled off an impressive list of North Carolina clients that included the building committee of First Baptist Church, the building committee of the University of North Carolina in Chapel Hill, and leading citizens William M. Boylan and Rufus S. Tucker of Raleigh and William S. Battle of Tarboro. He also cited Daniel Barringer and Thomas Bragg as clients, possibly for construction or remodeling of houses, now lost, in Raleigh. A month later, he ran a notice in the Raleigh Register of September 29, 1858, for carpenters and bricklayers to submit proposals at his office to build a “large Brick Residence” in Tarboro (probably “The Barracks” for William S. Battle) and alterations to a brick house near Rocky Mount (probably the Lewis house known as “Stonewall”). Potential bidders could examine “plans, full working drawings, and specifications” at Percival’s office on Fayetteville Street in Raleigh. In his advertisement in the Tarboro Southerner (March 12, 1859 and later), Percival added as references C. Harrison of Raleigh, K. H. Lewis of Nash County, and Robert Norfleet of Tarboro. Between 1857 and 1860, Percival produced for these and other clients a series of dramatic buildings that introduced bold new architectural ideas to Raleigh and to small towns from Tarboro in the east, to Chapel Hill in the west, and Yanceyville on the north.

Like other architects of his day, Percival employed the Gothic Revival and Romanesque Revival modes for churches. For Calvary Episcopal Church in the prosperous river town of Tarboro, he planned an asymmetrical Gothic Revival edifice with two unequal towers. His water-colored perspective of the church is the only known example of his drawings to survive. The brick church was planned to have a coating of scored stucco, but the Civil War delayed its completion, and it was completed in 1867 with the brick walls remaining exposed. Percival’s other known church design was for First Baptist Church in Hillsborough, a Romanesque Revival brick building with corner tower. Its construction was slowed by the congregation’s conflict with the builder, and local brick mason John Berry completed the job in 1870.

Percival especially favored the Italianate style. Some of his most extravagant and innovative designs were for Italianate suburban villas. Two of these—The Barracks built for planter and industrialist William S. Battle on the outskirts of Tarboro, and Montfort Hall built for William Montfort Boylan on the western edge of Raleigh—are symmetrical villas with classical motifs, their plans centered on rotundas lighted by skylights. Still more adventurous were two dramatically asymmetrical villas, both now lost, built on the outskirts of Raleigh: the Carter Braxton Harrison House and the Rufus S. Tucker House. Extraordinary and even eccentric departures from precedents in antebellum North Carolina, these ornate brick residences exhibited forms, plans and conveniences far ahead of most local residences of their day. When Raleigh merchant Rufus Tucker’s showplace villa was finished, it was complete with hot and cold running water, hot air heat, and acetylene gas lights. Tucker commended his local builders, Thomas H. Briggs, Sr. and James Dodd, on August 2, 1859: “The style of the House being new to our Mechanics and the work tedious and difficult—Must have required considerable patience and a great deal of labor, but you have shown in its successful completion (according to the designs of the Architect), that you are Master Builders.”

For the University of North Carolina, where he became successor architect to Alexander Jackson Davis, Percival used a more restrained Italianate or Tuscan mode. Although Davis had proposed designs for new buildings for the university, Percival won the project, perhaps due to proximity. He planned two large lecture halls and dormitories, now known as New East and New West, in a style to harmonize with Davis’s Old East and Old West, reiterating Davis’s Tuscan style in low roofs, bracketed eaves, and strong pilasters. Highlighting the drama of his creation, he oriented the new buildings to extend east and west perpendicular to the older pair, thus broadening the impact of the complex as viewed from the main, north front of the campus. (See John V. Allcott, The Campus at Chapel Hill: Two Hundred Years of Architecture [1986].)

Percival’s principal civic monument, the Caswell County Courthouse, displays another facet of the Italianate style. Symmetrical in form, it features a broad, arched roofline and bold cornice above an inset loggia where corn and tobacco leaf capitals enrich the pilasters. The masonry structure was stuccoed and scored to resemble stone blocks. Dabney Cosby and his son John W. Cosby, had originally won the job early in 1858 to design and build the edifice, but the opportunity was kept open and Percival took the project by mid-year.

Ever eager to promote himself and his profession, William Percival submitted his drawings of the Caswell County Courthouse and other buildings as the winning entry in the State Fair’s architectural drawing competition. A writer for the Greensboro Times of October 30, 1858, was “struck with the beauty and magnificence” of the courthouse drawing and commented, “We are very deficient in Architectural taste, and it is a source of pleasure to see a new spirit spring up. We hope Mr. Percival may be instrumental in awakening every corner of the State on the subject.” Percival frequently conversed with members of the press, who reported glowingly on his work and his qualifications as a “man of fine education and great architectural skill.” Percival continued to impress journalists and promote his work as part of the “improvement” in local architecture. On November 16, 1859, the North Carolina Standard carried a long story praising his completed works—the “striking” Tucker villa, the “handsome and imposing” Boylan residence, and the “beautiful and unique” Harrison house. Work under “contemplation” included a building for Peace College, a Baptist College, and a new bank.

With so much work afoot, Percival’s reach may at times have exceeded his grasp. During construction of New East and New West in Chapel Hill, university leaders complained that he was not providing adequate attention to their project. On February 23, 1858, the university president, David Swain, wrote to William Battle that he was so concerned about Percival’s delay that he was tempted to take the train to New York and turn to “Mr. Davis” for his services again. Complications arose concerning the intended heating system and whether fireplaces or gas fixtures should be used. Percival evidently left North Carolina early in 1860, leaving the heating systems in the hands of the contractor, Thomas Coates (in the end, fireplaces had to be installed). The buildings mentioned as under contemplation in November, 1859, were either left unbuilt or were constructed by other men. After a hiatus of some months, in June, 1860, it was reported that Percival had written from Richmond to explain that his long absence was due to a fall. Nothing further is known of Percival or his subsequent life or death. As late as the July, 1861, term of the Caswell County Court, county trustee Thomas D. Johnston reported the payment of $200 to William Percival, architect. Especially significant he also reported “about $25,000” paid to David McKnight of Greensboro, the contractor for the building. McKnight was a brickmason who had been involved in other major projects in the central Piedmont.

After disappearing from the state, Percival left behind him a few unfinished buildings and disgruntled clients. More important, however, he left a legacy of some of North Carolina’s boldest and most modern designs, the like of which would not be seen again for many a year.