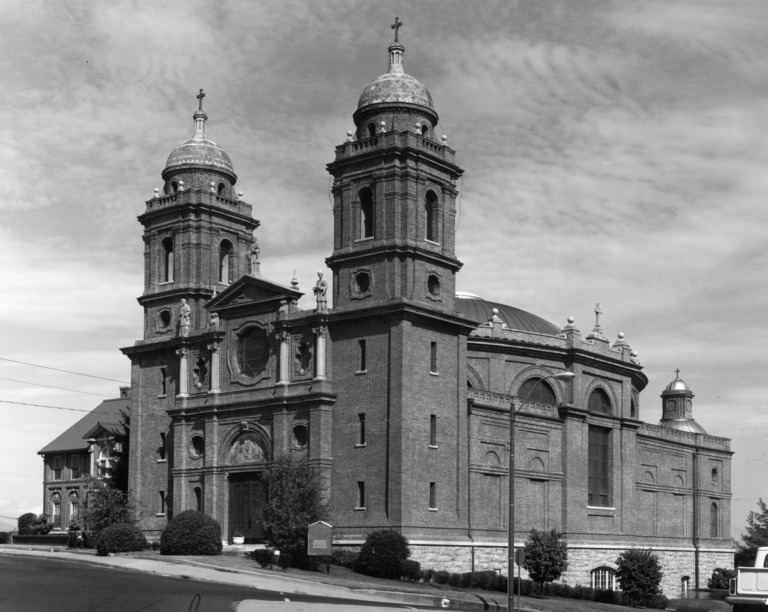 Rafael Guastavino y Moreno (1842-1908), architect and master builder, was born in Valencia, Spain and died at his residence in Black Mountain, North Carolina. He was known for improving an ancient form of masonry construction and introducing it to the United States, where it was used by leading architects in many significant buildings, particularly in the Northeast. The construction firm he started in 1889, the Guastavino Fire Proof Construction Company, continued in business until 1962, installing its specialized type of work in perhaps a thousand buildings in the United States. The company also built in Canada, Cuba, India and Great Britain. In North Carolina, Rafael Guastavino was involved in two major building projects. The Biltmore Estate (see Richard Morris Hunt) was the project that brought him to North Carolina. There he employed his special tile and construction methods in the swimming pool, ceilings in several spaces, and the gatehouse. His chief monument in North Carolina is St. Lawrence Catholic Church (now Basilica of St. Lawrence). His son, Rafael Guastavino, Jr., carried forward his tradition.

In Guastavino’s special method of building, widely called Guastavino Construction in the United States, skilled artisans used layers of flat clay tiles embedded in mortar to build horizontal parts of buildings in the form of vaults or domes, to carry floors, roofs, ceilings and staircases. These tile structures were strong, lightweight, fireproof, and economical. The economy of the method owed to the reduced need for steel or iron and formwork. Guastavino had experimented with this construction method in Barcelona, the major city of Catalonia, the leading industrial region of Spain. There, while a young man, he won a competition to design a large mill, and he soon was busy building other mills, factories and large homes for the industrialists of the region.

When Guastavino immigrated to the United States in 1881 this way of building was unknown here. He settled in New York City and had some success in winning design competitions, but he found more work installing his vaulting for floors in projects he was not asked to design. Even though he had designed large structures in Spain since the mid-1860s, working as a contractor rather than an architect would be his route to success in the United States. At the same time, he strove to become known to the larger building community by publishing a series of drawings of interiors in Spanish and Moorish styles and by securing patents on his basic tile structures. Within several years he was being engaged by the nation’s leading architectural firms, and his work was being installed in the homes of Vanderbilts and Morgans, public buildings such as the new Boston Public Library and Carnegie Hall, and utility buildings such as power stations for the Edison Electrical Illuminated Company.

Rafael Guastavino came to North Carolina to work on the Biltmore House in the early 1890s. Liking the area, he began to buy land south of Black Mountain, amassing about a thousand acres. He built a large house there and created an estate he named Rhododendron. He planted grape vines and apple trees, created ponds, and built workshops and kilns where he experimented with making the tiles he needed for his construction. Guastavino also planned an iron truss bridge over the Swannanoa River at Black Mountain, but it was evidently never constructed.

As a Catholic himself, he became involved in efforts to build a new Catholic church in nearby Asheville and was a major benefactor. The result was St. Lawrence Catholic Church (now a Basilica), perhaps the building that best displays Guastavino’s unique way of building with tile. It is also the last building where Guastavino was involved as an architect, although he shared credit with Richard Sharp Smith, the English-trained architect of record, who had also come to Asheville to work on the Biltmore House. Guastavino and St. Lawrence Church attracted frequent coverage in Asheville newspapers. The Asheville Citizen-Times of October 16, 1909, carried a detailed retrospective of its construction over nearly five years:

“This mighty vault was built bit by bit over nothing, above the church floor. When Mr. Guastavino began preparations of work up there with a handful of men, builders called him foolhardy, said it was an impossible feat, that there was no precedent for it.

“Mr. Guastavino’s plan was to build the entire dome of thin, flat terra cotta tile, 6 x 12 inches, and an inch thick—much in size and shape like the bricks of the ancient Romans still to be seen in the walls of the little church near Canterbury, England.

“Mr. Guastavino began laying these tile exactly as if he were shingling an imaginary dome in space, only using cement for nails. Beginning at the bottom course, the first six or seven thicknesses of tile were laid one over the other braking joints, in a special cement of plaster of paris. The next course, laid in Portland cement, was held in place by overlapping the tile below. The process was repeated until the great dome was finished without the aid of girdlers [sic] or supporting scaffolds.”

Rafael Guastavino died in 1908 at his home at Black Mountain, with the great church still unfinished. A high requiem mass was held for him in the nearly completed building. Plans were made for him to be interred in the church, which was later accomplished. When Guastavino died he was far from retired; he was still president and principal owner of his construction company and was involved and informed about the day-to-day business. This was only possible, however, due to the assistance of his son, Rafael, Jr. and a gifted business manager, William Blodgett. He was also still designing. His last patent was submitted in 1905, and was for a huge structure to be used “as a receptacle for century records.” It was to be taller than the Eiffel Tower. The patent was granted after his death.

Rafael Jr. took a major role in completing St. Lawrence after his father’s death. In 1909, when the church was nearing its dedication, the Asheville Gazette-News of September 15 described it as “one of the most beautiful and artistic in the country,” and noted that the younger Guastavino had “continued his father’s work in the architectural work of the church.” In 1909, Rafael Jr. began building St. Mary’s Catholic Church (now also a Basilica) in Wilmington, which is strikingly similar to St. Lawrence in its overall appearance and the use of the special Guastavino method of construction. It is not known whether the elder Guastavino had a role in its planning.

The work of Rafael, Jr., and of the Guastavino Company continued long after the death of Rafael, Sr., who had brought his special skills and Spanish heritage into American and North Carolina architecture. Rafael Guastavino’s remains rest in a crypt located to the left of the altar in St. Lawrence Basilica, at the entrance of the Chapel of Our Lady, behind a door covered with tiles and a medallion made by his son.