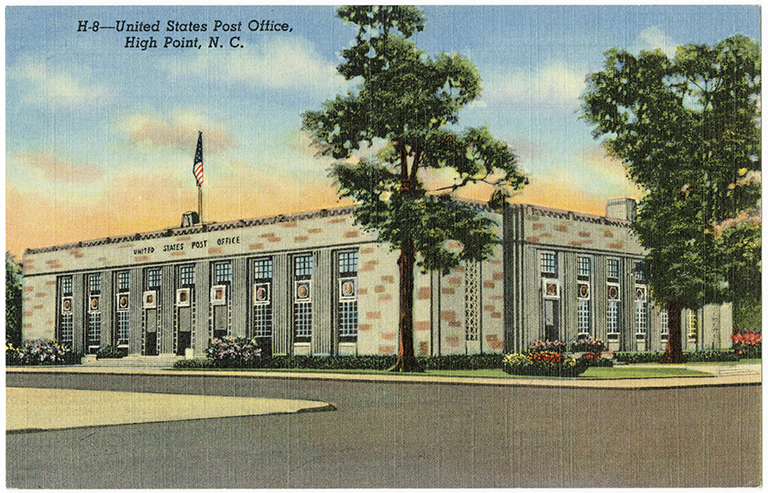 Eccles D. (Dewey) Everhart (Aug. 10, 1902-Nov. 30, 1964) was an architect active in the Piedmont during the mid-20th century. Like many of his contemporaries, Everhart worked in both traditional and modernist modes. He was associated with other local architects, including Herbert B. Hunter and for many years Louis Voorhees, his partner in a firm in High Point. His best-known works are those produced by the firm of Voorhees and Everhart, which substantially defined the mid-20th century character of High Point in a period of major growth and prosperity in the textile and furniture manufacturing city.

Public records show that Eccles was born in High Point, a son of John H. Everhart and Molly Aaron Everhart. In 1910 the family was living in Charlotte, and by 1920 they were back in High Point. Eccles attended the University of Virginia. He married Doris Abels in 1926. In 1930, the United States census recorded Eccles as head of a household that included Doris (a native of Minnesota) and son Lee, aged one year. High Point city directories listed Everhart intermittently from 1919 through 1958. In 1919 he was a “helper” at a local car works; in 1927, he was a draftsman in the architectural office of Herbert B. Hunter; in 1928 he was listed as an architect in Hunter’s practice; and in 1930 he was listed on his own as an architect—just as the Great Depression was curtailing work for architects.

It appears that Everhart and Louis Voorhees formed an architectural association in the early 1930s and formalized it in 1938. Everhart had his own listing in the city directory in 1933, along with individual listings under “architects” for Tyson Thaddeus Ferree, one Fred B. Klein, and Everhart’s future partner, Voorhees. In the 1939 city directory he was listed as part of the firm of Voorhees and Everhart. Eccles’s World War II draft card stated that he and Doris resided at 220 Edgedale Drive in High Point, and that he was self-employed as part of the Voorhees and Everhart partnership, which had offices at 308 1/2 N. Main St. in High Point. This association continued, with various other partners and employees, for many years. It is not clear which man designed which buildings or what their respective responsibilities were. For a discussion of the architectural work of the firm, see the entry for Louis Voorhees.

A long article in the High Point Enterprise of May 28, 1965 recalled the accomplishments of the “venerable architectural firm” of Everhart, Voorhees, and Connor, with emphasis on Everhart. (The firm was more often cited with Voorhees’s name first.) During his 40-year career, Everhart designed buildings that “continue to brighten the High Point landscape.” The article reported that early in his career Everhart had helped Herbert Hunter design High Point College’s initial structures. Everhart and Voorhees collaborated with Hunter in designing St. Mary’s Episcopal Church (1929) in High Point, a cruciform stone building in Early English Gothic Revival. The 1965 article also pointed to other projects, “ranging from the Post Office and County Building to the Medical Center, the Friends Church, Clara Cox Homes, YMCA, and the interesting renovation of a large, old dairy barn into the attractive clubhouse at Willow Creek Golf Club,” plus other public and private buildings, shopping centers and residences “too numerous to mention, but including some of the finest in this city [High Point], Thomasville, and Lexington.”

After a time, the article continues, the partners brought into the firm George Connor, a native of High Point who had studied at High Point College and present North Carolina State University and had working experience in Wilmington and Charlotte. In the mid-1950s Greensboro native and North Carolina State graduate S. Aaron Allred associated with the firm, then left for a time, and returned in 1964 as a principal in the firm. As many as 40 to 50 draftsmen and architects reportedly apprenticed and gained experience in the firm over the years. After Everhart’s death in 1964, the firm was operated chiefly by Connor, with help from Voorhees and Allred. In 1965 the firm was acquired by Connor and Allred; at that time the firm had numerous projects under construction, which the 1965 article listed.

Eccles Everhart was involved in community and professional activities. In 1952 he was elected vice president of the North Carolina chapter of the American Institute of Architects; other officers elected then included Thomas Wright Cooper of Raleigh as president, Robert Clemmer of Hickory as treasurer, and Edward Loewenstein of Greensboro as secretary. (The winter, 1952, AIA meeting at which these men were elected is pictured in a long, horizontal group photograph in Jackson and Brown, History of the North Carolina Chapter.) He continued to be active in his profession until his death at a relatively young age. Everhart was interred in Floral Garden Park cemetery in High Point.