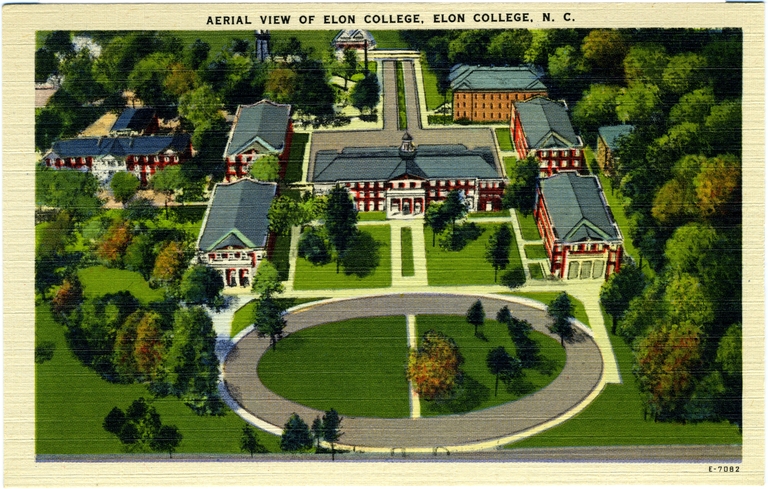 Herbert Bernard Hunter (October 5, 1890-March 31, 1976), architect, worked widely in North Carolina and elsewhere, with his principal North Carolina projects occurring in the 1920s. Born in Charlotte, according to his obituary he attended the Charlotte Military Academy before studying at the Beaux Arts Architectural School in New York. He worked as a draftsman for Charlotte architect Leonard L. Hunter (probably a relative) for a few years, and then established his own firm in High Point in the early 1920s. He was an early member of the North Carolina Chapter of the American Institute of Architects and was pictured among the group at the annual meeting in Charlotte in 1929. He also served as architect for the National Park Service, designing numerous park buildings. A special opportunity came, as his obituary stated, when he was “personally selected by President Franklin D. Roosevelt to make the drawing for the White House Oval Room.” He served in the Navy in both World Wars, planning hospitals and other facilities. He and his wife Johnsie had two children, Herbert Bernard, Jr., and Haynes N. In 1965 Hunter retired to Asheville, and he died in nearby Hendersonville at age 85.

Hunter designed a variety of buildings in North Carolina, chiefly in the 1920s. He is best known for his campus work, typically in the popular Georgian Revival-Colonial Revival style with red brick accented by bold classical detailing. He worked in this mode in planning the campus and designing the original buildings of High Point College (High Point College Buildings; 1920-1924; now High Point University), a newly established Methodist school. He continued the style with the Elon College Buildings (now Elon University), where after a fire, the industrialist Holt and Duke families sponsored construction of five buildings “all of colonial architecture.” And he used a similar vocabulary at the new campus of the Junior Order United Mechanics National Orphans Home (1925-1932), which was generally modeled on the University of Virginia.

Hunter was also eclectic in his use of styles and forms, as evidenced by his striking design for the 12-story Hotel Kinston (1928), an exotic blend of Moorish, Mission, and Art Deco motifs that towers over Kinston’s main street and is one of the few skyscrapers in eastern North Carolina. Also in Kinston, he planned a Tudor Revival mansion, the Harvey C. Hines House (late 1920s), for a leading businessman who was an organizer of the hotel project. Hunter’s obituary in the Asheville Citizen (April 2, 1976) also mentioned buildings at Mount Mitchell State Park, houses in Blowing Rock and Charlotte, and a residential project for James B. Duke, but these have not been identified.