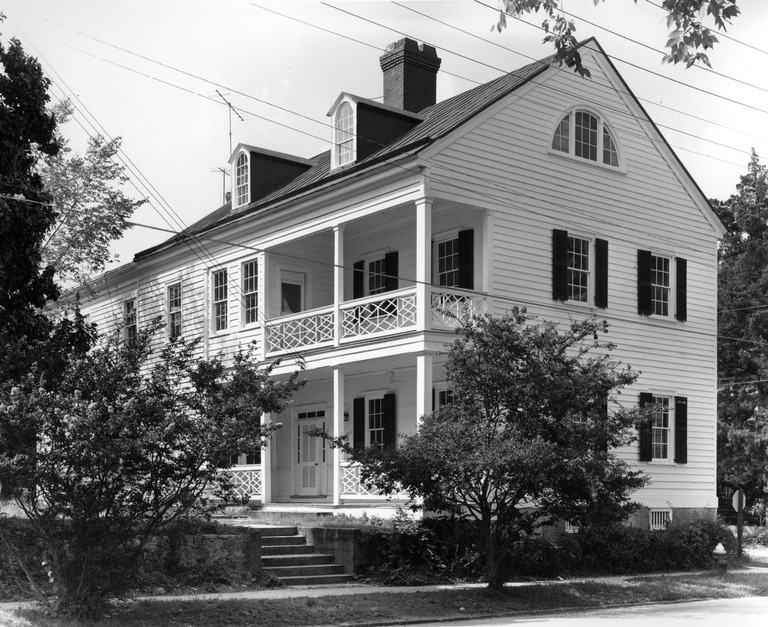 James Coor (fl. 1737-1796) was a wealthy and politically prominent resident of New Bern whom local tradition has described as an architect or builder. The source of this tradition is not clear, and no known documents from his lifetime record such a role. Three exceptionally fine late Georgian style houses in New Bern are credited to him on stylistic and traditional grounds, but proof remains elusive.

New Bern historian Gertrude Carraway described Coor as a “naval architect, builder, and revolutionary leader,” who was probably born in England but “apparently moved to North Carolina from the Eastern Shore of Maryland to serve as a naval architect at the invitation of Thomas Webber of Jones County, owner of land on Trent River as well as in New Bern.”

Carraway writes that Coor is “said to have drawn plans for a house for Webber at 506 Craven St. as well as one for himself [the Coor-Gaston House] on the same street and for several other men. The Masonic Lodge and the New Bern Academy are also said to have been designed by him.” Much of Carraway’s information came from the memoir of New Bernian John D. Whitford, “The Home Story of a Walking Stick” (p. 59), which includes information Whitford gathered in the late 19th century from older New Bernians. In many cases, Whitford’s accounts are accurate, while others are less reliable. Two of the standing buildings attributed to Coor—the Masonic Lodge and the New Bern Academy—date from after his death; it is not impossible that he had a hand in early planning for these institutions.

Architectural historian Peter B. Sandbeck suggests in The Historic Architecture of New Bern and Craven County, North Carolina that Coor may have been a contractor who worked in association with architect John Hawks. Lynda Vestal Herzog notes that James Coor and John Hawks were associated in several civic roles and groups from the 1770s onward. Their relationship in construction activities, if any, remains undocumented.

Circumstantial and stylistic evidence tend to support the tradition of Coor’s role in three late 18th century houses that share certain late-Georgian details akin to the John Wright Stanly House of 1779-1783 (and to Hawks’s drawings for the interior woodwork of Tryon Palace; see John Hawks). Coor’s own residence, the Coor-Gaston House (ca. 1786) is a fine example of late Georgian architecture with several details related to those at the John Wright Stanly House. Coor also owned and may have built the Coor-Bishop House (ca. 1770-1778, ca. 1904), which likewise has details in common with the Stanly House. Also attributed to Coor is the original portion of the Smith-Whitford House (ca. 1772-1782?, ca. 1875-1880), which was Whitford’s home in the late 19th and early 20th centuries and has features related to the aforementioned houses.

Supporting the tradition of his involvement in building, Coor did take two apprentices to the house carpenter’s trade: John, a free boy of color aged 8 in 1777 and Solomon Johnston, probably white, aged 14, in 1784. It is possible that he himself trained and worked with these boys, but it was not uncommon for merchants and other non-artisans to take apprentices to skilled trades and then assign their training to other artisans. Whether Coor was himself an artisan or perhaps a contractor or speculator who employed others to execute buildings is not known.

Coor’s early life is obscure, but according to Carraway he was in New Bern by 1737, serving as clerk of court, and in 1745 he and his wife, Mary, witnessed a local will; she was a daughter of Thomas Smith of New River. The couple had at least one son. Coor’s political career, on the other hand, is well documented. As described by Carraway, he served in the North Carolina colonial assembly during the 1770s and later in the provincial congresses. After the American Revolution, he served in the state legislature and as speaker of the state senate. The New Bern North Carolina Gazette of Saturday, December 31, 1796 noted the death on the previous Wednesday of “James Coor, Esq., an old inhabitant of this town, formerly a member of the Legislature, and speaker of the Senate.”

Note: Dendrochronology studies on the Coor-Gaston House and the architecturally related Craven County plantation house, Bellair, have shown later construction dates than originally believed; long thought to have been built shortly before the American Revolution, their probable construction dates are ca. 1785-1786 and 1790-1793, respectively. Future dendrochronology study may reveal revised dates for the other New Bern houses associated with Coor. Although repeated research on Coor’s role in building has found no documentary evidence, possibly new evidence will be found to illuminate the authorship of these distinctive and important 18th century buildings.