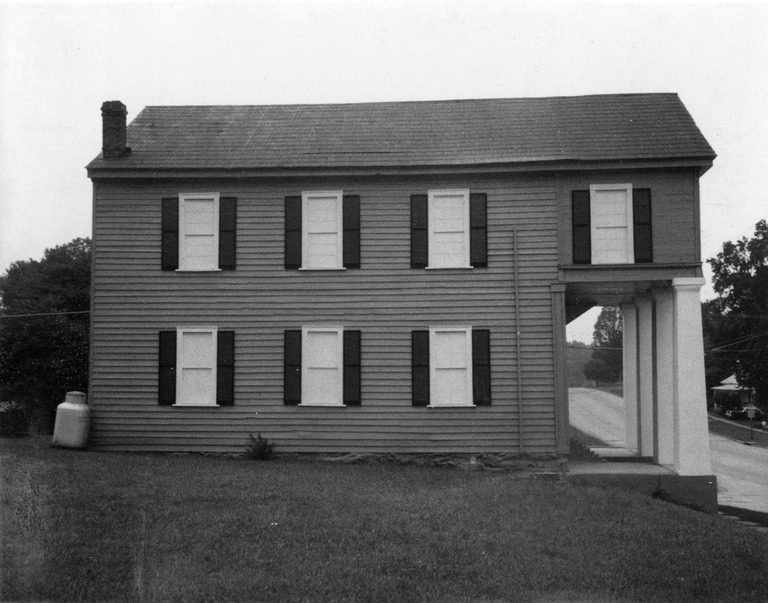 Martin Hanks (1799-1870s) was a carpenter and contractor active in Orange and Chatham counties and their county seats of Hillsborough and Pittsboro, respectively, for many years. Apparently a native of Chatham County, he and his brother Wesley undertook projects there from the 1820s onward. Their principal surviving work in that county is the Pittsboro Masonic Lodge [Columbus Lodge No. 102], a community landmark standing beside the principal east-west road through town a few blocks from the central courthouse. In an interview published in the Raleigh Sentinel in 1873, Hanks also stated that he had built several structures in Hillsborough during his tenure there in the 1820s, including the Masonic lodge, the academy, and others. In 1821-1832, according to church history, he and his brother Wesley built a sanctuary for St. Bartholomew’s Episcopal Church, also in Pittsboro.

According to tradition confirmed by Hanks’s own recollection, his earliest firmly attributed work is the Federal-Greek Revival style house known as the Ruffin-Roulhac House in Hillsborough. Hanks recalled, “I bought the lot where Judge Ruffin lives for $2.05, built a house and sold the place to William Phillips, who swapped it to lawyer Frank Hawks for a family of negroes.” Deed research for the National Register of Historic Places nomination confirms his statement (see below).

Hanks’s best-documented, surviving work is the Masonic lodge in Pittsboro. In 1838 he joined with local builder Isaac J. Collier to erect the lodge building for a lodge chartered in 1837. The cornerstone was dated June 23, 1838—a midsummer date relevant to Masonic traditions. Apparently the project encountered some problems, for on April 3, 1839 the lodge minutes recorded, “The Building Committee shall have full power to proceed to complete original contract with Bros. Hanks and Collier and failing therein make other contract or contracts as they deem best to finish work on the Lodge Hall.” (Both men were members of the lodge, as the term “brother” emphasizes, and Isaac Collier was also its secretary.) Its precise completion date is uncertain. The building was initially a straightforward, 2-story frame structure. In 1849 a Greek Revival portico extension was added facing the main street and reorienting the building, which had originally fronted on the side street, eastward.

Hanks soon became involved in the construction of the nearby, brick Chatham County Courthouse at the center of town. The contractor and possibly the designer was Raleigh brick builder Dabney Cosby, who undertook the job in 1843. A specialist in brick construction and stucco work, Cosby often subcontracted with or hired carpenters for his projects, which may have been the case for the courthouse. When the county made its final settlement with Cosby in February 1845, it reserved $1,533.02 for final payments to local workmen who had helped Cosby. Martin Hanks received $200, presumably for carpentry work.

Martin Hanks is also credited with building the Greek Revival style Baptist Church (no longer standing) in Pittsboro in 1847. Nothing further is known of Hanks’s career after that, but he apparently remained active at his trade. After the Civil War, Hanks advertised in the Pittsboro Semi-Monthly Record of the Pittsboro Scientific Academy of August 1, 1866, that he could “execute all kinds of cabinet work and carpenter’s work of all descriptions.”

United States censuses show the unmarried brothers, Martin and Wesley Hanks residing in their own and others’ households in Pittsboro. The census of 1850 recorded Martin and Wesley as living in the same household, both identified as “mechanics,” a common term for skilled workmen including builders. Wesley, indicated as the head of the household, was aged 49, and owned real estate valued at $4,000. Martin was 51 years old. The household also included three apprentices—John George, aged 19, James Brassington, aged 19, and Nasa Neil, 23—plus a mechanic, Atlas George, aged 25. The only woman in the household was Fanny Freeman, a “mulatto” woman aged 20. In 1860 the census listed Martin Hanks as a carpenter, aged 64, with real estate (illegible) and $200 in personal property. He was residing in a tavern keeper’s household. Wesley Hanks, lived in another household, and Fanny Freeman, identified as a free mulatto housekeeper aged 36, resided in the household next door with Margaret Freeman, aged 9 and probably her daughter.

In 1870, the United States Census listed Martin Hanks, aged 71, as a cabinetmaker living in a household headed by his brother Wesley, aged 69. Also in the unmarried brothers’ household again was Frances Freeman, now identified as a white housekeeper aged 50. Martin Hanks died in 1878, leaving his property to Wesley and to Fanny (Frances) Freeman, with Wesley the executor of his estate. Martin’s personal property consisted of walnut and pine furniture and a “Small lot of lumber & of unfinished Coffins.” Wesley died in 1879.

Note: The Pittsboro Chatham Record of Thursday, September 4, 1899 noted Fanny Freeman’s death the previous Monday, identifying her as as a “well known colored woman” aged about 77 years. “She was one of the ‘old issue’ of free negroes, and owned a comfortable house and lot at this place, where she lived and died.” “Old issue” referred to people of color who had been free before the Civil War and Emancipation.

Note: A few years before Martin Hanks’s death, on November 15, 1873, the Raleigh Sentinel carried a long and detailed story headed “‘Recollections of Hillsboro’ by Martin Hanks of Pittsboro”. The writer noted that he had conversed in Pittsboro with Mr. Hanks, who had reached “his three score and ten.” Hanks stated that he had gone to Hillsborough in 1819 and left there in 1829, and while there he built “Judge Nash’s” house: “‘An English architect [William Nichols?] allowed me one hundred dollars for a mantle piece, but I took only sixty from the Judge. I built the male academy for which the town paid me $3,800. The money was raised by sale of town lots, I bought the lot where Judge Ruffin lives for $2.05, built a house and sold the place to William Phillips, who swapped it to lawyer Frank Hawks for a family of negroes [the house known as the Ruffin-Roulhac House]. I built the Masonic Hall [Eagle Lodge] for that town the Masons price being $4,000. The money was raised by lottery. . . . The lot upon which the Lodge was built was bought by Judge Norwood and was once owned by Fanning. The old Judge, (Norwood) was a kind, sociable man and not above drinking with a house carpenter or brick mason. He often met us in Stephen Moore’s back room for a chat and a drink. I built a house for Mrs. Southerland, who was then a fine looking young widow, living near her father’s eight miles east of Hillsboro. I fell in love with her and could not keep from telling her so. She did not take my view of the subject and I concluded to travel awhile. About 1819-20 several houses were moved from Haywood to Hillsboro by Faucett and Ellison. Judge [Archibald D.] Murphy and his navigation schemes failed, and the bright prospects for Haywood vanished. John Faucett’s house and the corner stone west of the court house are two of the houses moved from Haywood.’ Such was our chat with Martin Hanks who is yet a bachelor, and may be displeased with this public notice of one of his old love affairs. The lady is not living and there is no one to take offence except Mr. Hanks, and we shall be able to settle the matter agreeably with him at the next court.”