John A. Fawcett; John A. Fossett 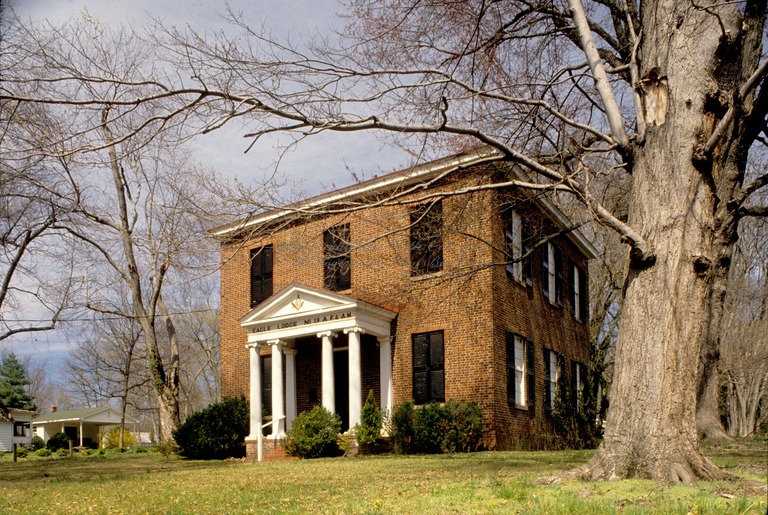 John Abisha Faucett (Fawcett, Fossett) (1793-August 25, 1847), was a Hillsborough house carpenter and the informal partner in the 1820s of brickmasons John Berry and Samuel Hancock. A son of Henry Faucett, Sr., John A. Faucett was part of a large extended family in the Eno River valley that included many craftsmen, chiefly woodworkers, who often married into families of similar interests. John’s brother, carpenter and cabinetmaker Thomas A. Faucett, operated a local woodworking and furniture making shop for several years, sometimes in association with partners—as Findley and Faucett (formed in 1831) and Faucett and Jeffers (formed in 1834). John married on March 28, 1821, Temperance (Tempie) Palmer, a daughter of house carpenter and joiner Martin Palmer and Priscilla Bivens, the latter the daughter of a brickmason. Members of both the Faucett and Palmer families are buried in the Old Quaker Burying Ground northeast of Hillsborough. (There was also a later John A. Faucett in Orange County, apparently a blacksmith.)

Little is known of John A. Faucett’s early life and work. He probably learned his craft from a family member. By 1818 he was sufficiently established to take an apprentice, Alfred Gray, son of Polley Gray, in 1818, to the carpenter’s trade. He also invested in at least one architectural book: Owen Biddle’s popular, The Young Carpenter’s Assistant (Philadelphia, 1805). His copy is one of the few surviving builders’ guides signed by a North Carolina artisan. He wrote inside the back cover, “J. A. Faucett, 1823, his Book, 1823,” and he also wrote, “John A. Faucett, Hillsborogh [sic], 1827,” on the margin of the plate opposite page 30, which depicts a stair case design with a simple step-end decoration of a type seen frequently in Hillsborough. John Berry’s autograph, probably of a later date, appears on the title page. (Motifs adapted from Biddle’s plates, especially this stair detail, appear in several Hillsborough buildings, including the ca. 1820 Ruffin-Roulhac House and Berry’s 1845 Orange County Courthouse. Some of these likely represent Faucett’s work, but many carpenters used Biddle’s book, and not every Biddle-inspired motif indicates Faucett’s hand.)

By the early 1820s Faucett had formed an association with brickmasons Berry and Hancock, and on November 16, 1824, the contract for the second Person County Courthouse in Roxboro was awarded to the trio under the name of John Fawcett & Company as noted in the Person County Building Commissioners’ records. This was the first of several major out-of-town projects for Berry and his associates. The three men continued to work together through at least the 1820s, though Faucett’s role in other projects is less well documented. Faucett probably worked with Berry and Hancock on the Frederick Nash House (1819) and the Hillsborough Academy and Eagle Lodge in the 1820s. He may also have executed the elaborate interior woodwork in Berry’s Caswell County Courthouse (1831-1833) and other Berry buildings. It has not been determined when Faucett’s association with Berry ended.

Faucett accumulated substantial property, such as houses and lots in Hillsborough, including several occupied by craftsmen in the area west of Wake Street. He may have worked with Hancock in overseeing the molding and burning of brick at the Webb-Hancock brickyard near the Eno River. Both Hancock and Faucett suffered from ill health in the 1840s and died within a year of one another, Faucett on August 25, 1847, and Hancock on April 11, 1848. Faucett was survived by his widow, Temperance, and daughters Priscilla, Martha, and Sally. At the time of his death, Faucett owned a large collection of carpenter’s tools indicative of the continuing activity of his shop. The sale of his possessions included chisels, adzes, saws, froes, dozens of different kinds of planes (for refined woodwork), grinding stones (to sharpen tools), and a number of chests and benches. John Berry was among the many individuals who purchased equipment from Faucett’s shop.