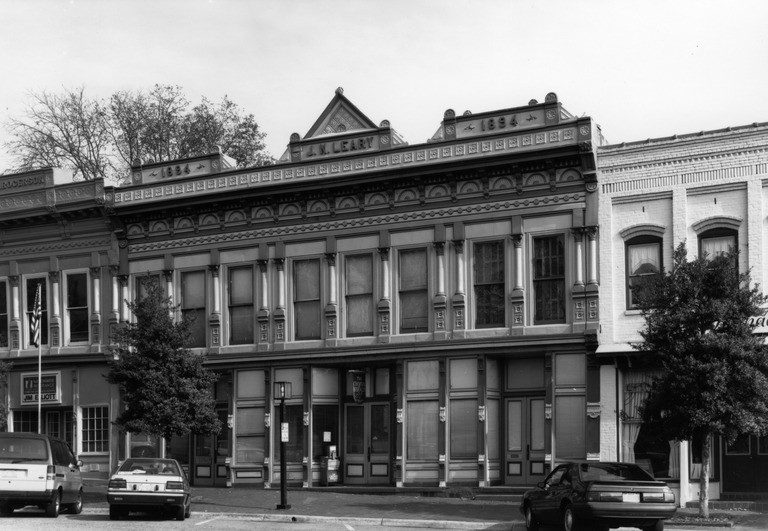 Theo (Theodore, Theo.) Ralph (October 30, 1857-October 21, 1903) was a carpenter born in Pasquotank County, North Carolina, who moved to Edenton in the mid-1880s and became the town’s leading builder for several years before his death. His work encompassed many types of buildings including residences, commercial buildings, a factory, and an ice house. He is especially known for his residences, which included many of the Edenton’s most elaborate houses of the late 19th century. Like his successor, Frank Fred Muth, he was the premier builder in Edenton during a busy period of construction and left a lasting mark on his adopted community.

Details about Ralph’s early life and family are scarce. He was evidently a son of William and Luvenia Ralph. The 1870 United States Census recorded Theo Ralph, aged 12, living in an Elizabeth City household headed by one S. LaBoyteaux, 58, a milliner, and two younger milliners who may have been her daughters. His relationship to these women was not indicated. The 1880 census recorded Theodore Ralph, a carpenter aged 21, in the household of Luvenia Ralph, a widow; he and John Ralph, 22, a porter, were identified as her sons and natives of North Carolina. In 1886, Theodore Ralph wed Sarah Frances (Fannie, Fanny) Spruill (October 17, 1867-January 10, 1897) in Columbia, Tyrrell County; they had at least five children before Fannie’s death at age 29. In the 1900 census, Theodore Ralph, aged 42, was listed as head of a household that included four children—Annie, 12; Mabel, 10; Grady, 7, and William, 5. (Another daughter, Fannie May, was born December 19, 1896, and died September 10, 1897).

Although Theo Ralph worked as a builder in Elizabeth City for several years, his projects there are not identified, nor is his name is not listed among the men in the building trades in Thomas R. Butchko, On the Shores of the Pasquotank: The Architectural Heritage of Elizabeth City and Pasquotank County, North Carolina (1980). On August 21, 1883, the Elizabeth City Weekly Economist carried a notice that he had sued one W. H. Purcell for money due for material and labor on building a dwelling on Fearing Street.

Ralph moved to Edenton about 1885, when he was in his twenties, and found a ready clientele for his work. The Edenton newspaper, the Fisherman and Farmer, frequently noted Ralph’s activities, including construction jobs and social and community events. In 1887, the Fisherman and Farmer of November 4 identified Ralph as “Edenton’s contractor,” who had begun building two brick law offices on the Shepard lot in front of the Bay View Hotel. In 1887, the Elizabeth City North Carolinian noted on June 22 that “our former townsman Theo. Ralph, now of Edenton,” had gained the contract for rebuilding the Bertie County Courthouse in Windsor, a few miles west of Edenton, and on August 11 the Progressive Farmer noted the same project and identified Ralph as “a well-known contractor of Edenton.” The Windsor Ledger reported on October 5 that Ralph, his wife and their baby had arrived the previous week and would remain until the courthouse was completed. The same newspaper reported expenses for the project, including $20.00 to one L. Thrower for drawing the court house specifications and two payments to Ralph for work on the courthouse in the amounts of $500 and $1,000.

On October 31, 1890, the Fisherman and Farmer carried a laudatory statement about Ralph’s contributions to the community: “If there is anyone in Edenton who deserves to have his name perpetuated in the town’s history, it is Mr. Ralph. He came to Edenton about 5 years ago with small means. . . and not only built up an estate, but helped others, too. He had done all in his power to advance Edenton, has constructed a number of fine buildings, and has ornamented our city, as well as having been useful to her.”

Ralph’s own residence, the Theo Ralph House, gained special attention: On September 5, 1890, the Fisherman and Farmer described “Theo. Ralph’s Mansion” as a “most magnificent structure” at the northeast corner of Broad and Gale streets. The “elegant” residence built for “our enterprising Contractor Mr. Theo. Ralph” was a “modern” design by architect George F. Barber of Knoxville, with six large verandas and an octagonal tower about 46 feet tall. It was to be so handsomely finished as to “surpass any residence ever erected in Edenton” and doubtless serve as an advertisement for Ralph’s capacities.

Over the ensuing years, Ralph’s work continued to attract attention. On May 22, 1891, the Fisherman and Farmer reported, “Progress is the order of the day. That enterprising and popular contractor and builder, Mr. Theo. Ralph, will erect on the South east corner of Broad and Church streets a handsome brick building with a front of 26 feet and a depth of 64 feet.” Although Ralph’s own residence and store have been lost, other examples of his work survive. Especially notable, specifications exist for two of Ralph’s most prominent projects, which still stand (see Butchko, Edenton, for transcripts). The Josephine Napoleon Leary Building (1894) on Broad Street in downtown was built for a woman born in slavery who became a leading entrepreneur; the specifications described the brick building with an “ornamental iron front” marked “J. N. LEARY” on the pediment. For the William J. Leary House (1897) overlooking Edenton Bay, Emma Leary and Ralph signed a contract with a detailed description of every construction element and in several instances mentioned items to be “like Mrs. Dixon’s”—suggesting that Ralph had previously built the home of Milton and Sallie Dillard Dixon now known as the Dixon-Powell House. The design of the ornate Queen Anne style Leary House came from Knoxville architect George F. Barber; plans for it survive (see Butchko, Edenton). Besides these documented examples, Thomas Butchko in Edenton: An Architectural Portrait suggests that “Most of the large Victorian, Italianate, Victorian, and Queen Anne houses built [in Edenton] between ca. 1885 and 1903 can be attributed to him” and provides a list of examples.

Ralph diversified his interests, as did many contractors and builders of the period. In 1896, according to the Fisherman and Farmer of April 3, he was erecting a factory on Church Street “for the manufacturer of sash, doors, and blinds.” He also undertook projects beyond Edenton. In addition to the Bertie County Courthouse in Windsor, the Fisherman and Farmer of April 3, 1896 noted that Ralph was erecting “a handsome residence for C. E. Branning in Bertie county,” and in 1899, the Virginian-Pilot of Norfolk of September 17 reported that Ralph had been to Belhaven, N. C., where he had a contract to build a large mill and a “nice dwelling.”

Ralph evidently made an effort to publicize his activities. A report from Edenton in the Norfolk Virginian of March 28, 1897, noted that Ralph had commenced a handsome residence for Mrs. Duncan Winston on West Queen Street in Edenton, and another on the following April 17 reported that Ralph had begun work to enlarge Edenton’s Bay View Hotel. In 1899 the Virginian-Pilot carried reports from Edenton on Ralph’s work of diverse types, such as an ice factory, a fish hatchery building, and some dry kilns for the Branning Manufacturing Company in Edenton and a saw mill for the Branning Company at Columbia; the latter notice from Edenton described Ralph as “our hustling contractor.”

In 1900, the Eastern Courier of Edenton reported on July 5 that Ralph had left Edenton for “Washington City,” where he was to be treated at “one of the celebrated hospital.” His ailment was not identified. He evidently returned to work. The Virginian-Pilot reported from Edenton on September 6 that Ralph had left with a “force of carpenters” for Belhaven to “do some work for the Belhaven Lumber Company” and expected to be away for two months, and the Edenton Fisherman and Farmer of October 18, 1900, noted that Ralph was nearing completion of Mr. George Folk’s new house on Church Street in Edenton. The cause of Ralph’s death in middle age is not yet known. He and his wife were buried in Beaver Hill Cemetery near Edenton.