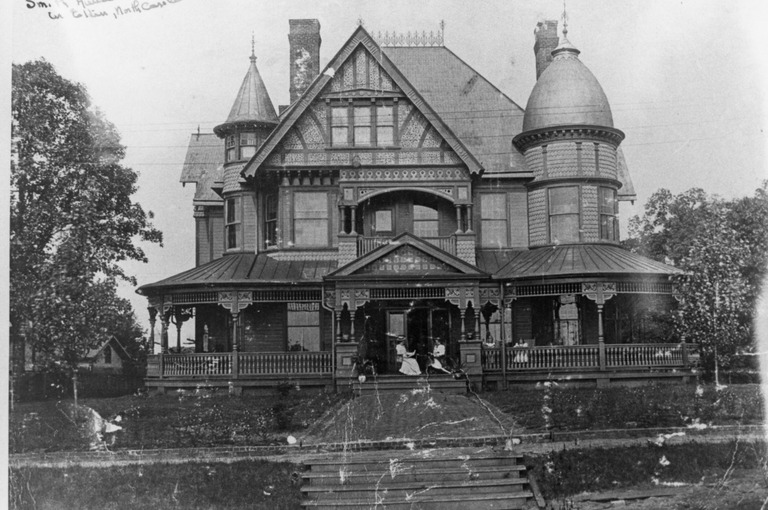 Thomas A. Kluttz (March 5, 1862-November 5, 1907) was a native of North Carolina who emerged in the 1880s as architect and superintendent for several buildings in the state, and in 1895 entered into a partnership with Knoxville mail-order architect George F. Barber. The resulting firm produced designs for many houses in North Carolina and in other states.

According to “First Families of Knoxville,” Thomas A. Kluttz was born in 1862 to Eli and Mary Elizabeth Linn Kluttz, who in 1860 were residents of Rowan County, N. C. Also in the Kluttz household in 1860 was Mary’s brother, Thomas Linn, aged 24, an apprentice house carpenter. Thomas A. Kluttz and his sister Mary (1867-1933) were orphaned at young ages: their mother died on March 31, 1867, shortly after Mary’s birth, and their father Eli died in 1874. The two orphaned siblings made their home with their uncle, mechanic and house carpenter Thomas Linn, from whom Thomas Kluttz probably obtained some or all of his training in construction. In 1880 the United States Census listed Thomas A. Klutz, single at age 19, and his sister, Mary, aged 13, living in Linn’s large household in Hickory, N. C. Both Thomas Kluttz and Thomas Linn were noted as “mechanics.” (The term “mechanic” referred to various handicraft trades and was often used for builders. Thomas A. Kluttz married Annie Boone in 1888 in Cumberland County, N. C., and they had a daughter, Jeannie or Jennie (1889-1909).

During the 1880s, Thomas Kluttz established himself in Fayetteville, N. C. as an architect and builder, and in the late 1880s and early 1890s, he regularly advertised his services as architect and superintendent in the Fayetteville Weekly Observer. He gained commissions for several prominent projects. In Fayetteville in 1887 he planned a new spire for the venerable and prestigious First Presbyterian Church to replace a spire that had deteriorated. (The 1887 spire was later replaced, and a portico was added by architect Hobart Upjohn of New York.) Likewise in 1887, the Fayetteville Weekly Observer of November 3 reported that Kluttz had superintended the completion of the Hotel LaFayette from designs by a Richmond architect, one H. Jackson. The Raleigh News and Observer of May 2, 1888, carried a report from Fayetteville that he had completed a “handsome new residence” on Railroad Street for Mr. A. E. Rankin. The account said it was “perhaps the neatest and most commodious dwelling in East Fayetteville,” and identified Kluttz as an “eminent architect” of Fayetteville. The Fayetteville Weekly Observer of June 27, 1888, reported that he was executing renovations at St. John’s Episcopal Church (see William Drummond). The same newspaper reported on June 4, 1891 that Kluttz had newly completed the Red Springs Hotel in that Robeson County town. The report cited Kluttz as a “well-known architect” and lauded the hotel for its tasteful appearance and comfortable arrangements, including “roomy piazzas” that “encircled” the hotel on the first and second floors,” allowing “a siesta completely sheltered from the sun” at all hours of the day. At the time, Red Springs was a popular summer mineral springs resort. During this period, architect and builder John C. Stout is described as having trained for three years in Kluttz’s office. Stout moved to Wilmington, where he became a prominent contractor and architect in the 1890s, and he later practiced in Rocky Mount and elsewhere.

In about 1895 Kluttz entered into a business partnership with the prolific mail-order architect George F. Barber. How that connection was made is not yet established. Kluttz and his family moved to Knoxville, where he stayed for the rest of his life and continued the association with Barber, working primarily in various Queen Anne and Colonial Revival modes. The United States Census of 1900 recorded in Knoxville architect Thomas A. Klutz, his wife Annie, a native of Florida, and their daughter, Jennie, aged 10. Kluttz was also listed in the Knoxville City Directories of 1903, 1904, and 1906. Several North Carolina houses are cited or documented to the firm of Barber and Kluttz, including the large Colonial Revival style Dred and Ellen Yelverton House in Wayne County, N. C., for which plans survive marked “Barber and Kluttz.” The building list below includes works cited to Barber and Kluttz as well as those cited to Thomas A. Kluttz alone.

In 1907, the Manufacturers’ Record of December 12 carried an announcement that the firm of Barber and Kluttz, architects, had been discontinued due to Kluttz’s death the previous month, but that it would continue under Barber’s name. “The firm has ample facilities for preparing plans and specifications for and superintending the construction of all classes of buildings, and has planned some of the most important structures in the South. It has various new orders now in prospect.” Thomas A. Kluttz was buried in the Old Gray Cemetery in Knoxville, where his marker shows his birth and death dates as March 5, 1862-November 5, 1907. As noted in findagrave.com, he was predeceased by his wife Annie Boone Kluttz (1872-1903).