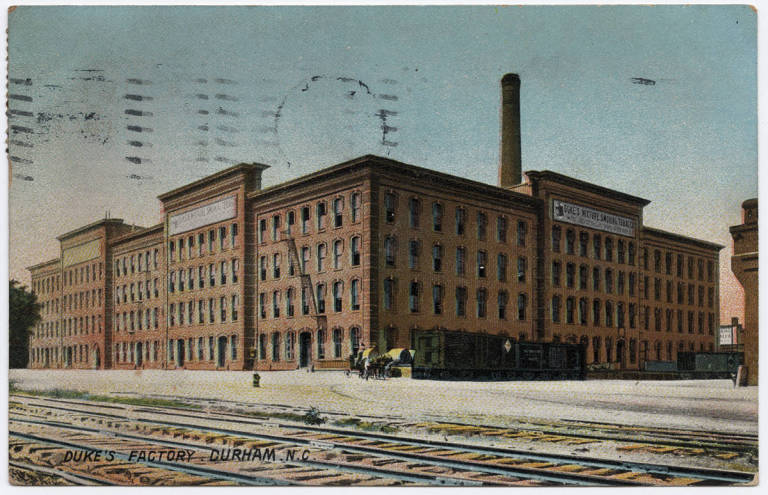 William H. Linthicum (February 14, 1818-September 22, 1886), was a builder born in Prince Edward County, Virginia and active in Danville and elsewhere before moving south about 1881 to become a leading builder in Durham, N. C. during its tobacco building boom of the 1880s. Of his known body of work in Durham, all that survives is the altered but still imposing W. Duke & Sons Company Cigarette Factory, one of the few buildings surviving from that transformative era. His son and his grandson, Hill C. (Carter) Linthicum (1860-1919) and H. (Henri) Colvin Linthicum (1886-1952) operated the firm of Linthicum and Linthicum and had prolific practices that encompassed several North Carolina communities.

Reportedly William H. Linthicum was for a time a member of the construction firm of William H. and Thomas Linthicum, founded in Danvi1le, Virginia in 1850, which erected buildings in Maryland, Virginia, and North Carolina. Little is known about that partnership. The United States Census of 1850 identified William H. Linthicum as a single carpenter aged 28, residing with other young men in the home of merchant C. G. Simmons in Pittsylvania County, Virginia. In 1860 Wm. C. [sic] Linthicum was still in Pittsylvania County, Virginia, a master carpenter aged 38 with personal property of $5,050 and real estate valued at $5,000. He headed a household that included his wife, Susan, and young sons Rolley [Raleigh, Rawley], George, and Hill C. In the 1870 census, he was listed as a widowed farmer, and his oldest sons were working on the farm. In 1880, he was again identified as a carpenter aged 60 and was residing with his grown sons Raleigh, George, and Thomas in the tobacco town of Danville, Virginia.

In the early 1880s, William H. Linthicum joined in the tobacco era building boom in Durham, North Carolina. His firm is credited with constructing such key buildings as the W. Duke & Sons Company Cigarette Factory (1884); the E. J. Parrish Warehouse II (1887); and store buildings for M.C. Herndon, W.T. Blackwel1, and Slater and Halliberton.

Capturing special attention was the large and prestigious factory built for W. Duke and Sons to accommodate their expanded use of cigarette-making machines. The Raleigh News and Observer of December 25, 1884 carried an enthusiastic description of the edifice shortly after the scaffolding was taken down and “the proportions of the new structure fully revealed. It certainly is a splendid addition to that stirring city.” The brick was made in Durham by “Mr. W. H. Linthicum, the builder of the edifice, who is of Danville, Va.” The building measured 184 by 71 feet and stood four stories tall above a basement, with a “handsome cornice of galvanized iron made by a firm in Salem, Ohio.” The writer commented that if the tobacco firm’s business continued to increase, the building would be expanded (which it was). There followed a detailed account of the organization of the building, its machinery, its workers, and its large output. The owners said “the building is the best for the business that they have ever seen, and give unstinted praise to the builder, Mr. Linthicum.”

When W. H. Linthicum died suddenly in 1886, one newspaper account from North Carolina carried in the Richmond Dispatch of September 25 identified him as “a native of Prince Edward County,” who had lived in Durham for five years and “constructed many important buildings.” The Raleigh News and Observer carried a story from Durham noting, “By his death the town loses one of its most reliable and efficient contractors for brick work. He has constructed many of the largest buildings in town, such as Duke’s factory, Lyon’s factory and Stokes’ hall [an opera house, no longer standing], and as a faithful, upright and competent contractor, he had the confidence of the community.” He was buried in Durham’s Maplewood Cemetery.