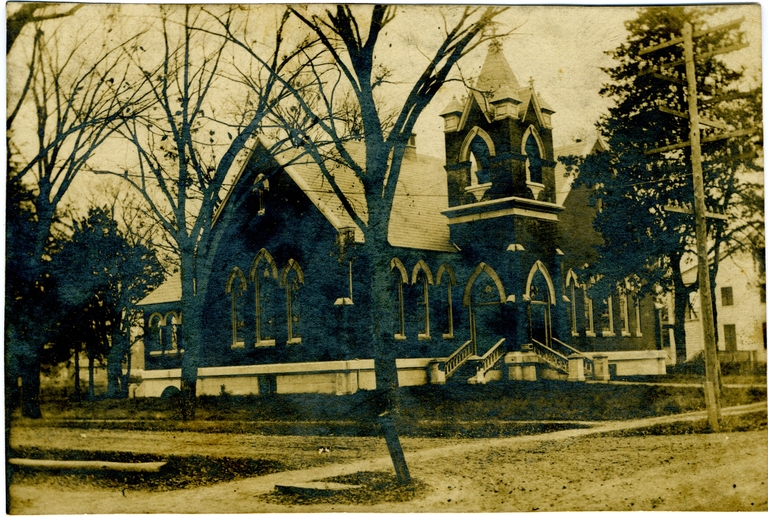 Grounded in a tradition of family employment in the building trades in the upper South, Hill C. Linthicum was the son of Susan Carter and William H. Linthicum (1818-1886), a builder in Virginia and later in Durham, North Carolina. Little is known of William’s early activities, but he was evidently part of the construction firm of William H. and Thomas Linthicum, founded in Danville, Virginia in 1850, which erected buildings in Maryland, Virginia, and North Carolina. By the late 19th century, William was involved in the tobacco era building boom in Durham, North Carolina, where his firm was credited with constructing such key buildings as the W. Duke & Sons Company Cigarette Factory (1884); the E. J. Parrish Warehouse (1887); store buildings for M.C. Herndon, W.T. Blackwell, and Slater and Halliberton; and the Durham Baptist Church (1887).

Hill C. Linthicum was educated at Danville Military Academy and studied architecture in Baltimore. He joined his father’s contracting business in 1878 and thereby gained expertise in practical building and business methods. In the early 1880s he married Elizabeth Freeborn, a native of Canada, and settled in Henderson, North Carolina, where he and later his son H. Colvin designed several buildings over the next few decades, including his own house in 1883. Judging from the numerous building starts of houses and stores reported in the Manufacturers’ Record, by the early 1890s Linthicum was enjoying a prolific practice in Winston (later part of Winston-Salem). The journal listed in 1891 several commissions from leading citizens of the growing tobacco city, including residences for Thomas Farrow, V. W. Long, John Young, D. L. Devane, H. Poindexter, C. C. Vaughn, Cicero Tise and M. W. Norfleet, plus designs for the Christian Church, King’s Daughters Dormitory, and the Tise and Wilson stores. Of these, the Edgar Vaughn House and the H. Poindexter House are believed to be the only surviving examples of his work in Winston-Salem. Further information is needed on his other projects in the city.

At the turn of the century, Hill C. Linthicum had sufficient work in Durham to open an office there. References to his projects in the Manufacturers’ Record cite him as Hill C. Linthicum of Durham as early as 1904. His known buildings in this period include a 1904 residence for a cotton mill superintendent, the Jesse H. Erwin House on Pettigrew Street in Durham, and the Confederate Memorial Auditorium in the eastern North Carolina town of Hertford in 1906. He contributed notices regularly to the Manufacturers’ Record during the first decade of the 20th century. (See note on Manufacturers’ Record at the end of this entry.)

After his move to Durham, Hill C. Linthicum engaged actively in promoting professionalization for North Carolina architects. He became an early member of the North Carolina Architectural Association (established in 1906) and served as its vice president in 1911 and president in 1912. Most important, he took a central role in founding the North Carolina Chapter of the American Institute of Architects, working with AIA executive secretary Glenn Brown to organize the chapter in 1911 and 1912. Linthicum along with Louis H. Asbury, Richard Sharp Smith, Willard C. Northup (see Northup and O’Brien), and Garland Rose were the five AIA members who met on September 16, 1913, to form the North Carolina chapter. On September 17, it was Linthicum who wrote to Brown to report that “last night in Greensboro” the chapter was “duly organized,” and to send the documents to apply for the chapter’s membership in the AIA. As he wrote to the AIA, “We have only 5 institute members and 7 chapter members. We are a baby chapter.” Linthicum became its first president, with Louis H. Asbury vice president and Willard C. Northup secretary-treasurer. Linthicum also became a devoted advocate of the state bill to require licensing of architects, working along with Asheville architect William H. Lord and others to frame the licensing act and gain its approval from the state legislature in 1915.

Meanwhile, in 1912, Hill’s son, H. Colvin Linthicum, joined his father’s office as a draftsman after completing his architectural education at the University of Pennsylvania. He had attended preparatory schools in North Carolina, including Oak Ridge Military Academy and Bingham Institute. He also attended Smithdeal Business College in Richmond, Virginia, before deciding on a career in architecture. In 1915, the two Linthicums were among the first architects in North Carolina to gain their licenses after passage of the licensing act in 1915. H. C. Linthicum’s certificate was #23, and Hill C. Linthicum’s was #24, both obtained in the 1915 group of men granted licenses because they had been in professional practice prior to that year. In 1918 the younger Linthicum became a full partner in the firm; he continued the business alone after Hill C. Linthicum’s death in Durham on October 6, 1919.