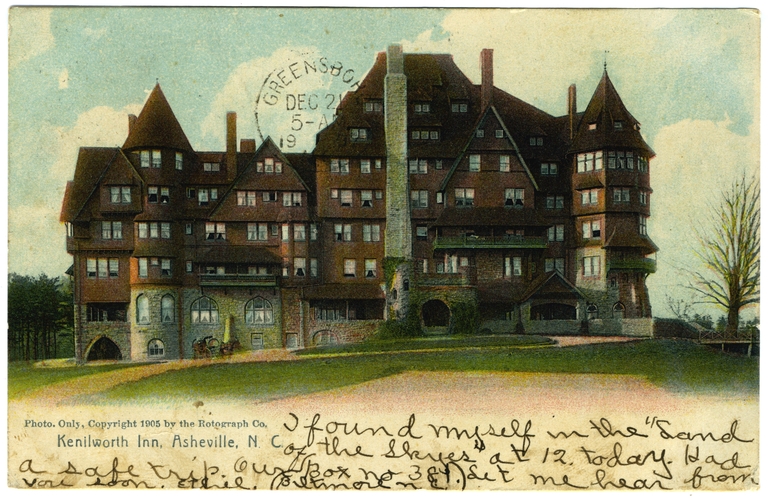 William Lightfoot Price (1861-1916) was a major Philadelphia architect who designed three ambitious resort projects in North Carolina, all in locales connected to national urban centers by railroad lines: the Kenilworth Inn at Asheville; the E. W. Grove Park Hotel, also near Asheville, and the Overhanover development near Wilmington. Of these, only the Kenilworth was realized.

The importance of Price’s work nationally has gained new recognition in recent years with the publication of George E. Thomas’s biography, William L. Price: Arts and Crafts to Modern Design (2000), from which most of this entry is derived. A native of Philadelphia, Price apprenticed to a carpenter before gaining architectural training under Philadelphia architects Addison Hutton and Frank Furness. During his early career (1881-1890s) he was associated with his brother Francis (Frank) as W. L. and F. L. Price, and also with his brother Walter. After the turn of the century William Price became the senior partner in the firm of Price and McLanhan, with M. Hawley McLanahan, an architect and real estate developer. Price planned many commercial buildings and private residences in Philadelphia and elsewhere, and was especially well known for his imposing hotels and other large buildings. He worked in the Shingle Style and the Arts and Crafts mode as well as designing some unusually early and influential works in the geometric style that became known as Art Deco. Among his best known and most spectacular projects were the Art Deco style Traymore Hotel in Atlantic City and the Chicago Freight Terminal.

The Kenilworth Inn (1890-1891) at Asheville, Price’s only North Carolina project known to have been constructed, was the first big project for the young W. L. and F. L. Price firm. Like its near contemporary, the Battery Park Hotel designed by Philadelphia architect Edward Hazlehurst, the Kenilworth was erected during Asheville’s railroad era resort boom of the late 19th century. Investors included men associated with creation of the nearby Biltmore Estate (Richard Morris Hunt). The Asheville Daily Citizen of September 17, 1890, published a perspective drawing, probably by Price, of the envisioned hotel on which work had begun on August 25. The account cited Dr. W. C. Browning of Philadelphia as president of the Kenilworth Inn Company and identified Frank S. Riggs of Philadelphia as the contractor. The immense building with its tall roof and panoply of gables, chimneys, and towers created a romantically picturesque landmark on its hilltop site. It commanded, according to the newspaper, views of the mountains “on all sides, as far as the eye can reach.” From the “sky parlor” one could see trains arriving from the east through the Swannanoa gap and others chugging in from the south on the Spartanburg line; another vantage viewed the “Vanderbilt estate, which is just across the river.”

Price also created designs for another large hotel near Asheville, for developer E. W. Grove—a towered giant chateau in stone, which he labeled the E. W. Grove Park Hotel in his drawing. Before building his hotel on Sunset Mountain, in 1911-1912 Grove obtained designs from Price and several other architects. Grove accepted none of them but adapted ideas from some (including Price’s) in the large, rough stone Grove Park Inn (1913) built under the supervision of his son-in-law, Fred Seely.

Far more ambitious was the Overhanover resort development (ca. 1902-1920s) proposed in 1908-1910 as an exclusive seaside resort near Wilmington in New Hanover County. It was one of several expansive projects envisioned by the partners. As George Thomas explains, McLanahan had been scouting for likely development sites, with special attention to railroad access and seaside locations. On the strength of their Blenheim Hotel in Atlantic City, New Jersey, Price and McLanahan attracted the interests of a variety of developers. The Overhanover site, located at Figure Eight Island, was an especially promising site close to the Atlantic Coast Line Railroad where it neared the ocean.

For a time headquartered in Wilmington, the ACL encompassed a series of earlier lines and constituted part of a principal route from New York to the burgeoning beach resorts on the east coast of Florida, where the leading developer was railroad magnate Henry Flagler. Flagler, who had special ties with the Wilmington area, married Mary Lily Kenan of Wilmington in 1901. In 1902, the ACL acquired the Savannah, Florida, and Western Railway Company, which included a main line from Charleston to Tampa, thus completing the ACL route from Richmond to Florida. It seems likely that Flagler or Wilmington-oriented capitalists such as William R. Kenan, Jr., Pembroke Jones, or ACL president Henry Walters—all of whom were well acquainted—might have had some role in the Overhanover endeavor.

Price’s drawings for Overhanover (1909), illustrated in Thomas’s biography, depict a grandiose complex with imposing entrances flanked by dramatic water towers; elaborate hotels—the Onslow, the Hanover, the Wilmington, and the Raleigh; a sanitarium; and many private residences. Like several of Price and McLanahan’s other schemes, Overhanover was never built. However, one of Price’s best known hotels, the Clarendon Hotel at Sea Breeze, Florida, built in 1910 farther south on the ACL, incorporated architectural features similar to those Price had drawn for Overhanover.