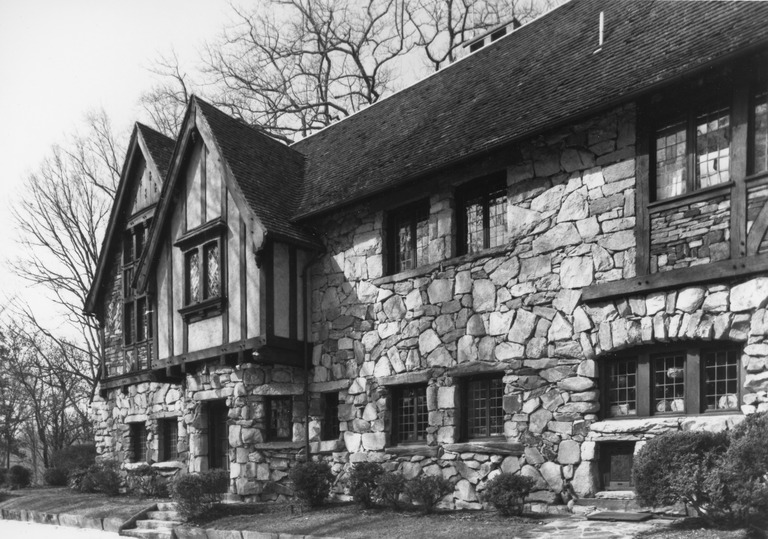 Erle G. (Gulick) Stillwell (August 29, 1885-October 22, 1978) was a prolific architect who spent his long career in his adopted community of Hendersonville, North Carolina. With an extensive practice in western North Carolina and other locales, he planned buildings of myriad styles and types—including Tudor revival, rustic, and Georgian Revival residences; neoclassical public buildings; and Art Deco movie theaters—and led in the development of the architectural profession in western North Carolina and the state. The biographical entry and building list here are adapted with permission from William Mitchell, Buildings as History: The Architecture of Erle Stillwell: A Descriptive Catalogue of His Drawings in the Henderson County Public Library (2006). The building list provides only a sampling of Stillwell’s many projects, with emphasis on those still standing; a fuller roster with illustrations appears in Buildings as History.

Stillwell was born in Hannibal, Missouri, to an established local family. In his youth he moved with his widowed mother to various cities, and when he was eighteen he and his mother settled in Hendersonville. He soon made the first of several real estate investments in the area, and in 1907 he married Eva Smith, the daughter of a local real estate developer with whom Stillwell formed a partnership. He became interested in architecture as well as real estate, studied the subject at Cornell, and went to Atlanta in as an apprentice architect. He moved back to Hendersonville by 1913 and associated briefly with Hendersonville architect Hans C. Meyer before the latter moved away.

Stillwell thrived in Hendersonville, where he was well positioned to take part in the growth of the town and the booming real estate market in western North Carolina, which was closely related to the Florida land boom. He invested extensively in real estate and development, as real estate prices soared. Like his contemporaries, he was fluent in essentially every style his clients might desire. He designed elaborate and sophisticated residences for wealthy residents of the region, including several in the deluxe suburbs of Asheville and its neighboring community of Biltmore Forest. Like others of the region’s leading architects, he often produced Tudor Revival, Georgian Revival and various Anglophilic and Francophilic designs for these clients, but he also planned richly detailed versions Mediterranean modes akin to those in Florida. In 1929, the first year that the North Carolina Chapter of the American Institute of Architects presented honor awards to the state’s architects, Stillwell won awards for two projects, the Mrs. F. W. Galbraith House in Biltmore Forest and the Johnson Residence (not identified).

Stillwell also planned several relatively modest houses including bungalows and designed unpretentious but handsome brick commercial buildings in Hendersonville, Brevard, and other communities. Lie many of his contemporaries, he often employed classical motifs and occasionally Gothic revival elements in apartment houses, shops, churches, civic buildings, and schools. Among his most distinctive school projects was Christ School in Arden, North Carolina, where over a period of several years he planned picturesque campus buildings of local stone.

The crash of the Florida land boom in 1926 dealt a severe blow to construction and to real estate prices in western North Carolina. For Stillwell like many others it essentially halted his business and depleted his fortunes. Three years later the stock market crash and the onset of the Great Depression put him and others deep into debt. A welcome opportunity came in 1932 when the owner of the famed High Hampton Inn in Cashiers, North Carolina, commissioned Stillwell to design a large, rustic inn featuring local chestnut bark shingles, to replace the predecessor building that burned in May 1932; it opened the following May. Continuing work at Christ School also helped keep the firm in business.

During the Great Depression, Stillwell had the good fortune to begin an association with the Wilby-Kincey company which was co-owned by Paramount Pictures. In 1934 he designed the first of many theaters for the firm, an association that proved to the salvation of his practice. Centrally located in their communities, and accommodating the growing public for movies during the Depression, his movie theaters were classic examples of the type and usually featured moderne and Art Deco motifs. Often they were the most striking—or only—examples of modernist design in their small town settings.

Through his movie theater work, he garnered the first of several projects sponsored or assisted by the United States government through the Public Works Administration—the remodeling of the city hall in Sumter, South Carolina, to include a movie theater. Late in the 1920s, he had provided plans for present Western Carolina University, and he gained additional commissions for the campus that were funded during the depression with PWA and WPA assistance.

With the onset of World War II, private construction projects all but disappeared, and military construction projects went primarily to large firms. To qualify for some of this work, Stillwell and some of his architect friends in Asheville teamed up to form Six Associates. The founding members of the group, who planned the association at a meeting at the S&W Cafeteria in Asheville (designed by Douglas D. Ellington), included Stillwell, Henry Irvin Gaines, Anthony Lord, William Waldo Dodge, Jr., W. Stewart Rogers, and Charles Waddell. The combined staff of Six Associates in this period included as many as forty. The firm won commissions for three field hospitals and other projects and formed relationships that brought additional work after the war. In the postwar era, Six Associates established itself as a premier architectural firm in western North Carolina; Stillwell and other founders continued their association until their retirements or deaths. The firm headquartered in Asheville continued under that name until the mid-1990s. The successor firm is Callaway Johnson Moore and West.

Stillwell kept his office in Hendersonville until 1953 while also commuting to Asheville where the main offices of Six Associates were located. He continued to design buildings, including the theaters that were his specialty. In 1950 he became president of Six Associates and spent much of his time in Asheville, while maintaining his own practice for several years. He retired from Six Associates in 1970. His wife, Eva, died in 1971, and Erle lived until 1978, dying at the age of 93.

Throughout Stillwell’s career he was active in the organization and promotion of the architectural profession. He was a founding member of the Architect’s Association of Western North Carolina. He became a member of the American Institute of Architects in 1916 and was a longtime leader in the North Carolina Chapter of the American Institute of Architects, serving as the chapter’s secretary-treasurer (1917-1921) and president of (1922-1923 and 1942-1944). He was awarded the honor of FAIA in 1942. A substantial portion of his architectural drawings and other records are held by the Henderson County Public Library in Hendersonville.