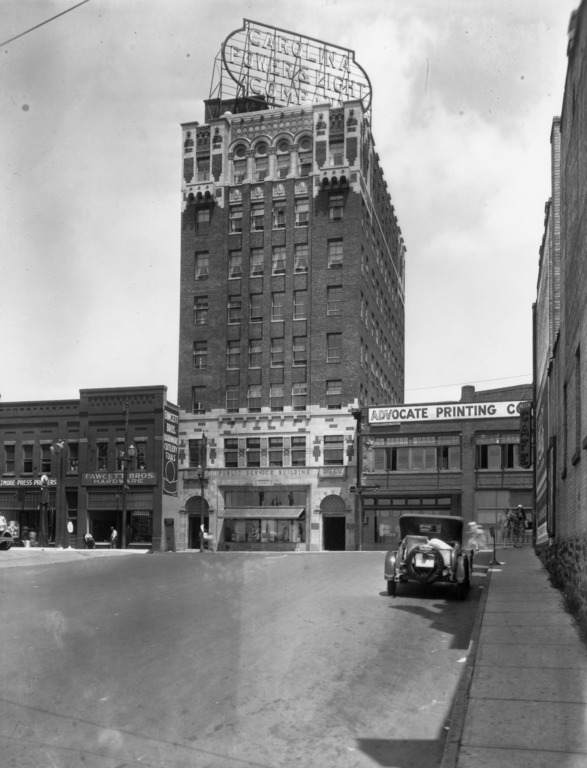 James Douthit Beacham (1891-1956) and Leon LeGrand (1894-1963) of South Carolina formed an architectural partnership in Greenville, South Carolina in 1921 which continued through 1940. Although much of their work was in South Carolina, they also took commissions in Asheville and elsewhere in western North Carolina and had a brief partnership with architect Henry Irven Gaines (1900-1986) as Beacham, LeGrand, and Gaines in the mid-1920s.

James Beacham, the son of William G. Beacham, was born in Greenville and studied at Furman, Clemson, and Virginia Polytechnic Institute, graduating from the last in 1911. He worked as a draftsman for Joseph Emory Sirrine from 1911 to 1914 and again from 1917 to 1920. In the interim he worked for Hart and Gardner in Nashville and with H. Olin Jones in Greenville. Leon LeGrand graduated in architecture from Clemson in 1915 and was working as a draftsman in Sirrine’s office in 1919. Beacham and LeGrand opened a practice in Greenville in 1921; the firm’s largest project in South Carolina was the 10-story Chamber of Commerce Building (1920s) in Greenville in association with the Sirrine company.

In 1925 amid a building boom in Asheville and western North Carolina, Beacham and LeGrand entered into a “three-way partnership” with the younger architect Gaines, likewise a native of South Carolina who had worked for Sirrine. The Asheville Citizen of July 17, 1925 explained that Asheville office, styled Beacham, LeGrand, and Gaines, was to be operated by “junior partner” Gaines and was separate from Beacham and LeGrand’s firm in Greenville “although associated for mutual convenience.” The trio soon joined with other regional architects to organize the professional group called the Architect’s Association of Western North Carolina. The three-way partnership got off to a promising start but terminated after a major project, the Fleetwood Hotel near Hendersonville, North Carolina, collapsed. See Beacham, LeGrand, and Gaines, and Henry Irven Gaines for further details.

By 1928, as indicated in Asheville city directories, Beacham and LeGrand were partners with offices in both Greenville and Asheville, and Gaines was practicing on his own in Asheville. Beacham also resided in the mountain city from about 1928 to 1931. Beacham and LeGrand’s best-known building in North Carolina is the Public Service Building, an ornate 8-story skyscraper erected by the Coxe estate with Carolina Power and Light Company as the original tenant. The design takes full advantage of the hilly site, with equally elaborate façades on all sides creating a bold landmark. Although Beacham and LeGrand continued to work in South Carolina through the 1930s, no North Carolina works of that period have been attributed to the firm.