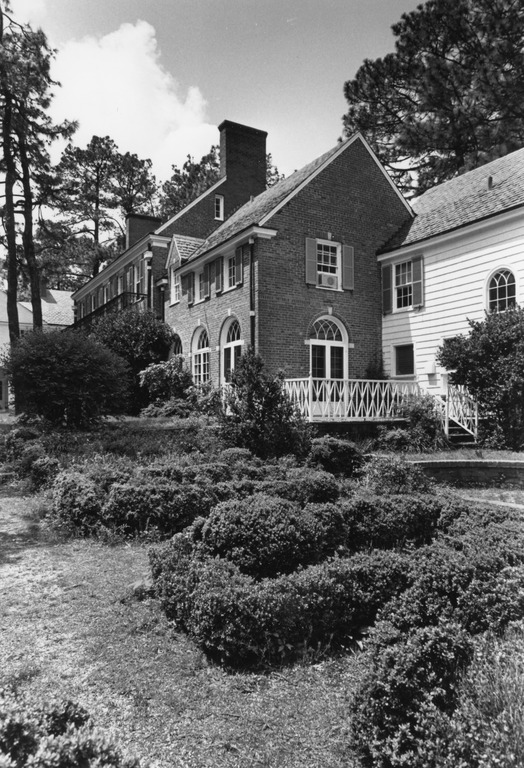 Aymar Embury II (1880-1966), a New York architect known for his country houses and country clubs of the early to mid-twentieth century as well as bridges and other public works in New York, created in North Carolina a distinctive and eclectic body of architecture that helped define the unique character of the Sand Hills resort communities including especially Pinehurst and Southern Pines. The local newspapers gave extensive and laudatory coverage to Embury’s work in the area, reporting frequently on buildings he designed. The Moore County News of April 27, 1922, noted several Embury projects and commented, “Embury has set his sign manual so persistently on Weymouth Heights [in Southern Pines], as well as on Knollwood and Pinehurst that the Sandhills country is becoming an Embury dream.” An article about his work in the Sand Hills in Architectural Record, June 1924, observed that his buildings there employed styles drawn from Colonial and English traditions “with a freedom and informality that are characteristic of all of Mr. Embury’s work, but with a distinct (if undefinable) local flavor.”

Born in New York City, Embury was graduated from Princeton University in 1900 with a degree in engineering, received his master’s degree from the same institution in 1901, and began practicing architecture in New York in that year. As related in the finding guide to his papers at Syracuse University Libraries, Embury taught architecture at Princeton while working for various architectural firms in New York. During World War I he served as a captain with the 40th Engineers of the United States Army, and he designed the Army Distinguished Service Medal and Distinguished Service Cross. Embury’s architectural practice encompassed a range of building types, including clubs, country houses, hotels, libraries, and college buildings including those at Princeton, Kalamazoo College, and Hofstra College. Especially noteworthy was his work with New York Parks Commissioner Robert Moses, as part of a team that designed and executed more than 600 projects for the city of New York, including numerous bridges, the Lincoln Tunnel, and the Port of New York Authority Terminal Building. He was also the architect for the New York City and Argentine Pavilions at the 1939 World’s Fair in New York. Like other architects of his generation, he made a study of historic architecture, which honed his skills in using colonial and other historical motifs in his own designs. He wrote several books, including 100 Country Houses (1901), The Dutch Colonial House (1911), Country Houses (1914), Early American Churches (1914), The Liveable House (1917), and The Esthetics of Engineering Construction (1943). Notable for North Carolina was his volume on historic architecture in New Bern for the White Pine series.

Although Embury’s practice focused in the northeastern and mid-Atlantic United States, he created a significant body of work in North Carolina, chiefly in Moore County in the Sand Hills region, a thinly settled area which in the late nineteenth century had become home to the resort communities of Southern Pines and Pinehurst. The temperate weather, relatively dry air, and supposedly healthful aura of the pines attracted northern investors, developers, visitors, and residents. In time the area, especially Pinehurst, became a nationally renowned golf mecca, while in Southern Pines fox hunting and other equestrian sports were popular. The developers of both communities created planned towns, and they and the residents of the communities employed various northern architects to design buildings of a sophistication previously unknown in the locale.

Much of Embury’s work concentrated in Southern Pines, to which he was introduced by fellow Princeton graduate James Boyd. The grid-plan town was begun as a health resort for northerners after the railroad arrived in 1877, and it grew slowly until the 1890s, when the focus shifted to recreation. By 1910 it had a collection of residences and hotels in a variety of styles. When the popular Piney Woods Inn burned in 1910, resident author and property owner James Boyd provided a tract at the south end of Massachusetts Avenue for a new hotel—the project that brought the young Embury to the area. His large, frame Colonial Revival style Highland Pines Inn opened in 1912 and featured capacious porches punctuated by gabled pavilions. The grounds were planned by Alfred Yeomans, a landscape architect from Chicago and a Boyd relative. Embury also designed several Colonial Revival style Highland Pines Cottages to be built near the hotel and rented under its management. This prestigious project was the beginning of a long period of work for Embury during a prime development era for the Sand Hills resort communities.

According to “Some Work of Aymar Embury II in the Sand Hills of North Carolina,” by Russell J. Whitehead (Architectural Record, June 1924), when Embury did his first work in the area in 1911, he used simple designs employing local materials for reasons of cost and also “because local labor could be depended upon to execute only the type of construction to which it was accustomed.” Entering a world long dominated by vernacular building traditions, he found that some local contractors “had never seen a blue print, or built from plans, and full sized details were unknown. These men, however, were eager to learn and quick to take suggestions and among them there are today [1924] many mechanics who can read plans intelligently and execute them well.”

Embury’s architectural and personal style suited Boyd and the prosperous, typically northern people who created the leisurely lifestyle of Southern Pines, and he did much to shape the architectural character of the community. He employed an eclectic vocabulary of revivalist styles, including the Georgian Revival and various English and French-inspired modes that he and his clients saw as suitable to the picturesque setting, temperate clime, and sociable lifestyle. He frequently used a linear floor plan organized around a large, central living room with views of both the entrance front and the rear garden that integrated indoor and outdoor living. Among his best known residential works in Southern Pines is Weymouth (ca. 1904, 1920s), a red brick and frame Georgian Revival house with a zoned, linear plan to accommodate author James Boyd’s literary and equestrian social circles. For Boyd’s aunt, Mrs. A. P. L. Dull, Embury designed a luxurious and eclectic English and French inspired residence called Loblolly (1918, 1928). After a downtown fire in 1921, Embury designed new brick commercial and institutional including the post office and a doctor’s office. He also planned several other residences in Southern Pines, as well as the Southern Pines Country Club as the centerpiece of a highly regarded golf course.

Likewise during the 1920s, Embury engaged in projects for clients in nearby Pinehurst, the curvilinear model resort village designed for Bostonian James W. Tufts by Frederick Law Olmsted, where his work appears alongside that of other architects including Hobart Upjohn of New York and the firm of Rand and Taylor, Kendall and Stevens of Boston. He designed two commercial blocks and the Carolina Theater (1921-1922) at the heart of Pinehurst along with several residences—including a 1925 model home, the “Ideal House”—chiefly in Colonial Revival modes with wood-shingled exterior walls compatible with the New England image of the town. Embury wrote of the community in the Pinehurst Outlook of December 10, 1932, that it was “singularly fortunate in having not only a few buildings of outstanding merit, but in having practically nothing Pinehurst that is offensive architecturally, so that. . . no matter where one turns, one feels that the community possesses good taste, and demands an agreeable background to the business of living.”

Other Embury projects in the Sand Hills included red brick, Georgian Revival style edifices in the railroad town of Aberdeen such as the Aberdeen High School and the Sand Hill Fruit Growers’ Association Building. Embury also designed in the 1920s the Mid-Pines Country Club at the new Tufts family development called Knollwood a few miles outside Pinehurst. The formal, expansive Georgian Revival style clubhouse was the center of a golf course planned by the famed golf course designer Donald Ross. This combination of a large and handsome clubhouse with a professionally designed course was a popular model for country clubs for many years to come; as a specialist in such facilities, Embury attracted elite North Carolina clients outside the locale, including the Charlotte Country Club and the Hope Valley Country Club near Durham. Although Embury continued to practice until the mid-1950s, there are no known post-World War II examples of his work in North Carolina.

According to Embury’s obituary in the New York Times of November 15, 1966, he was survived by his third wife, the former Jane Schabbehar, and three children, including his son Edward, with whom he had practiced architecture for several years. The Times reported that Embury had retired from active practice about ten years earlier but “had continued as a consultant to his firm here, now headed by his son, Edward Coe Embury.” The Times article noted that Embury sometimes “showed little patience with modernists” and quoted his comment in an 1938 interview: “Modernists. . . believe that the essence of their work is to do something that has never been done before. They leave off all ornamentation because, they say, the ornaments do not aid the structure to do its job. I suppose some of these architects do not use neckties or buttons when they dress.”