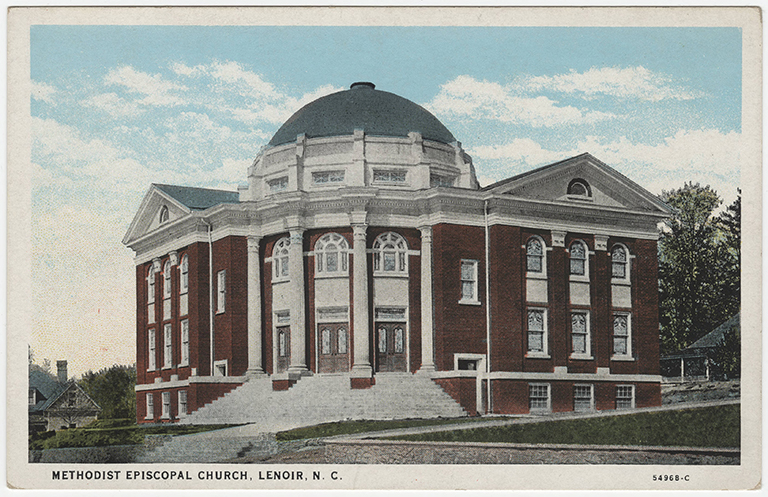 Though his career began promisingly, Georgia-born architect Charles Walter Carlton (1864-1947) worked in obscurity most of his life, often in the employ of other architects and builders. While never a resident of North Carolina, he oversaw the design and construction of perhaps a dozen Methodist Churches in the state, all of them based on a Beaux Arts version of the Akron Plan, and most of them located in the piedmont region. Rarely credited as the architect, Carlton’s role in the design of these churches is revealed in building trade journals and minutes from church building committee meetings.

Carlton was born near Carrollton, Georgia on December 3, 1864, just as the Union army under William Tecumseh Sherman was ripping its way through the state. At age 19, in 1883, Carlton entered the office of John Moser and E. G. Lind. It is likely that Carlton learned the rudiments of architecture from Moser and Lind while the firm was engaged in the building of the Cathedral of St. Philip in Atlanta on Washington Street, begun in 1882.

In 1884 Carlton joined the Atlanta firm of Kimball and Wheeler. The principal, Hannibal I. Kimball, was an inventor and entrepreneur busy at the time building the Kimball House Hotel in Atlanta (1883-1885) and preparing plans for the Randolph County Courthouse in Cuthbert, Georgia (1885-1886). The designer for buildings was Kimball’s partner, Lorenzo Wheeler, an architect from New York famous for his use of the Dutch Renaissance Revival style. The training Carlton received on such projects must have given him the skills and confidence to take on the design of large public buildings.

After two years with these firms in Atlanta, Carlton moved to East Point, Georgia to work for the U.S. War Department on the construction of Fort McPherson. Founded in September of 1885 to house ten army companies stationed near Atlanta, the fort consisted of 42 buildings arranged in two parallel rows facing a large parade ground. How Carlton contributed to the design of these buildings is unknown. We do know that Captain Joshua West Jacobs, the fort’s supervisor of construction, employed civilian architects, and that most of the buildings were constructed after 1888. It is likely that Carlton worked for several years at Fort McPherson.

During the early 1890s Carlton moved to Brunswick, Georgia to establish his own practice. By 1893, though, he moved again, this time to Birmingham, Alabama to supervise an addition to the Girl’s Industrial school at Montevallo. He next appears in the historical record in 1899 as an office manager for J. W. Golucke, an Atlanta-based architect engaged in the design of the Calhoun County Courthouse in Anniston, Alabama (1899-1900). That year, Carlton settled in Anniston and married Bobbie Frances Freemon (1876-1958) of Meridian, Mississippi, with whom he would eventually have four children.

Carlton did well in Anniston, working on the courthouse for his new hometown and designing the Hotel Alabamian (ca. 1905), also in Anniston. Two more courthouse commissions in Alabama—in Clay County ($40,000) and Cleburne County ($25,000)—both secured in 1906, helped to provide Carlton with the funding to buy out the firm of J. W. Golucke that year. Over the next six years, Carlton was involved with the design of the State Normal College at Jacksonville Alabama (ca. 1910), the Cleburne County Public School in Heflin, Alabama (ca. 1910), and the 1912 remodeling of the Talladega Country Courthouse, damaged during a tornado. All of the designs reflect the Neoclassical Revival of the American Renaissance.

In 1912 Carlton moved his family and firm to La Grange, Georgia. The reason for the move is unclear, though it seems he became associated at this time with Chattanooga architect Reuben H. Hunt on projects in Georgia and South Carolina. In 1915 the Ohio Architect, Engineer and Builder reported that “Charles W. Carlton and others of La Grange, Ga have incorporated the firm of Charles W. Carlton Co. with a capital of $5,000 which may be increased to $10,000 and will open offices for the practice of architecture.” The practice was focused on churches. In 1916 alone Carlton was credited with the design of two churches in Lanett, Alabama, one Methodist and another First Christian, and First United Methodist in Piedmont, Alabama. Unfortunately, the business of designing small churches in rural communities could not sustain the firm; in 1916 Carlton moved to Chattanooga and joined the firm of R. H. Hunt and Company as a draftsman.

Over the next five years, Carlton worked in Hunt’s office. Judging from his initials on surviving drawings by the R. H. Hunt Company, Carlton continued to work on churches. In many cases, he planned churches for congregations in industrial communities where civic and business leaders were often Methodists and encouraged construction of churches for that denomination. It is uncertain how much independence he enjoyed. Though not a partner in the firm, Carlton was trusted to prepare drawings for some of Hunt’s ecclesiastic commissions, and he represented the firm to church building committees. While the Hunt firm was credited with works such as the First Methodist Church South in Lenoir, North Carolina (1916-1918), the congregation considered Carlton the architect, and he was so cited in the Lenoir News-Topic of October 17, 1919. This church typified his work: a 2-story brick building atop a raised basement, with a trio of entrances oriented to a curved corner bay with pilasters or engaged columns and a dome, flanked by pedimented wings.

Most of Carlton’s work between 1916 and 1921, while he worked in the Hunt firm, was in the piedmont area of North Carolina, within a day or two of travel from the Chattanooga office. Carlton essentially reproduced the Neoclassical Akron-plan design of the Methodist church in Lenoir for a dozen other towns and cities in North Carolina. In 1920, he provided a similar design for the West Durham Methodist Church, which was published in the local newspaper and much admired but evidently not constructed. Also in 1920 he provided plans for the Methodist church in Boone, as reported in the Watauga Democrat of February 26, 1920. That newspaper described the proposed building in some detail, including the arrangement of classrooms adjoining the auditorium and in the gallery, which could provide additional seating, and a room inside the dome for 150 men to meet. The report quoted from the Rev. D. M. Litaker, “one of our best church builders,” who said, “You can get 50 per cent more building in this plan for the same money than with any other plan in use. This plan of building is grand in its looks because of its perfect proportions. It does not have to look ornaments to make it look good. It is commanding in its classic beauty just from its perfect lines of architecture.”

In 1921 Carlton traveled to Louisiana and Florida to do some unspecified supervisory work, but he continued his church building work in North Carolina, now in his own name. He continued to essentially copy the Methodist church plan he developed while working for Hunt. Examples include Burkhead Methodist Church in Winston-Salem, which was cited in the Winston-Salem Journal of October 12, 1920 as about to begin construction in spring, 1921, and Asbury Temple United Methodist Church in Durham (ca. 1925).

The later 1920s and the 1930s do not appear to have been prosperous times for Carlton. In 1927, now 63 years old, he returned to Chattanooga to work for the contracting firm of M.K. Wilson as a draftsman and supervisor. He also worked for the Willingham and Company, lumber manufacturers. In 1930 he and Bobbie lived in a modest rental. The couple retired to northern Florida, where Carlton pursued an interest in psychology and ancient languages. He died in Gainesville in 1947.